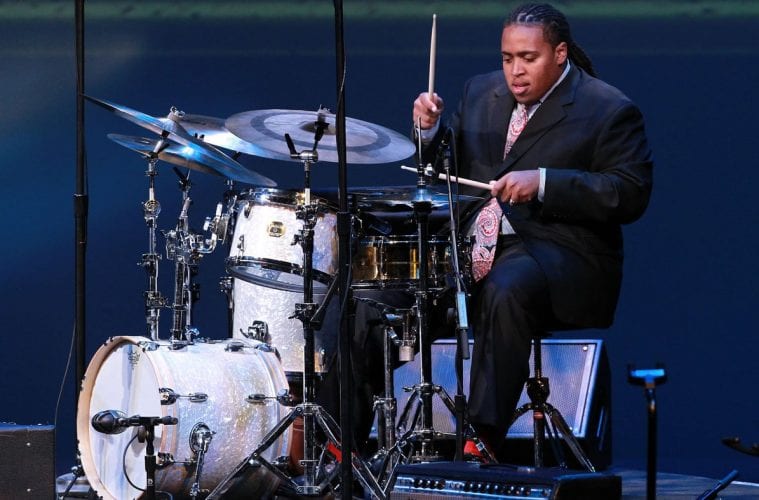 Review: Drummer Jamison Ross shows why The Velvet Note is a jazz club worth the drive It’s been two years since I’ve seen a show at The Velvet Note.

This is not for lack of good music. Since opening in 2011, The Velvet Note has hosted big-deal jazz acts like Diane Schuur, Christian McBride, Wycliffe Gordon, Gretchen Parlato and Kenny Garrett, along with top-flight local and regional performers. This dedication to Atlanta’s talented local jazz players is ever more important, as a few long-standing outlets for local musicians in the area have moved in new directions.

While the venue isn’t perfect, that hasn’t kept me away, either. The space itself is cozy without being cramped, and the acoustics certainly rank up there among other venues of its size.

The management’s seemingly curious choice to serve food on plastic plates with plastic cutlery is aimed at reducing unwanted noise during performances, and it works. But this silence-is-golden outlook doesn’t extend to the bartender, who can occasionally shake drinks with abandon during ballads. The intimate space means every little extraneous noise fills the entire room.

There is demand for jazz out in the suburbs, and the venue also seems to draw listeners from inside the city. On Friday, for a concert by drummer Jamison Ross, patrons packed the 40-seat room for the first set and nearly filled the space again for the later show.

Ross gathered former classmates from Florida State University for the show, including the superb local musicians Rick Lollar on guitar and Nick Rosen on piano.

Ross initially gained notice with his first-place finish in the prestigious Thelonious Monk International Jazz Drums Competition in 2012 and is currently celebrating the release of his first disc, Jamison. While he won the competition as a drummer, Ross is as much about his powerful voice as his playful drumming.

During the first set, he ran through the entire release, his voice alternately affecting a rough edge for “Bye, Bye Blues” and a rounded, New Orleans bounce for “Deep Down in Florida,” showcasing his easy, fluid range. His voice was light and vibrant on “Sack Full of Dreams,” which he dedicated to the victims of the recent shootings in Charleston.

Ross and company gave a superb, exciting performance, so the mental hurdle I face with The Velvet Note is likely rooted in location. The club doesn’t have an exciting, in-the-moment address; Google Maps will point you to a tiny strip mall just off Exit 10 on 400 that is a traffic-heavy 26 miles from Atlanta’s only other jazz club of note, Churchill Grounds. That Midtown jazz venue is still the location of record for Atlanta jazz.

Yes, it takes some effort to get to The Velvet Note, as I learned when I heard bassist Andrew Sommer lead a quartet of seasoned locals in 2013, but in a city with dwindling options, it’s worth the trip.

With a few exceptions, The Velvet Note is the one place to regularly hear national touring acts outside of a university recital hall. The overall schedule can be hit or miss, but The Velvet Note’s booking choices (which include Jimmy Cobb on November 21) can ease the sting of a long drive from the city.