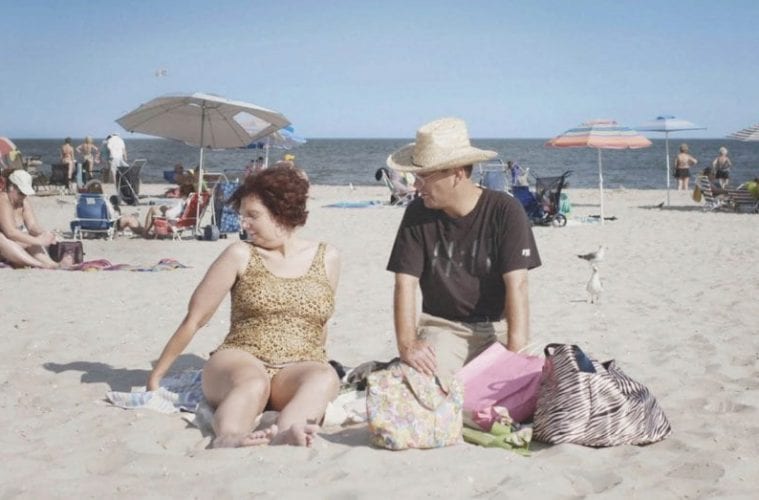 Dina is a reminder that those of us who consider ourselves “normal” go through life in constant performance mode, play-acting our ideal version of ourselves from moment to moment. We rarely say what’s on our minds or what we’re really thinking. By contrast, the central couple in this documentary — Dina Buno and her boyfriend Scott Levin — don’t have the luxury of that kind of artifice. Both have Asperger’s syndrome, while Dina also has what her mother calls “a smorgasbord” of diagnoses, including OCD and anxiety attacks.

In the opening minutes, about to get her teeth drilled, Dina asks the dental assistant, “Would it be possible for you to grab my hand?” Like Scott, she always says what’s on her mind, even if seems “inappropriate.” When she speaks, it’s in an unmodulated bray. That causes some uncomfortable moments, in public spaces for instance, or when she’s complaining to friends about Scott and the emotional/sexual needs he’s not fulfilling. Meanwhile, Scott himself is standing about five feet away, not responding to her comments — which is sort of the problem.

The movie raises a tricky question. Does a cinema verité documentary about people with developmental challenges border on exploitation? Directors Antonio Santini and Dan Sickles seemed to have limitless access to their subjects. Cameras roll day and night in Dina’s living spaces, including her bedroom. Personally, I can’t say where consent begins and ends in situations like this. But the directors have chosen their footage with care and respect, so the finished film doesn’t feel exploitative. There’s only one choice I was a little disturbed by, even though (or maybe because) it’s very powerful. More on that later.

At the start of the doc, both Dina and Scott live separately in suburban Philadelphia — she in an apartment above a tattoo parlor, he with his parents. Soon, though, he moves in with Dina, in the days leading up to their wedding. The movie follows as they prepare for the big day, which includes some honest talk about sex. Dina, who’s older than Scott, has been married before, and dated many men after her first husband died. Scott is less forthcoming and voices anxiety about being intimate with Dina, fearing he’ll get it all wrong.

There is such tender hopefulness about these two, it’s easy to get really invested in their happiness — especially when you see what makes them “different” to the rest of the world also contains specific obstacles for the two of them. In particular, they face emotional and sexual challenges that may or may not be easily resolved. “I wonder what a honeymoon is like when people deeply have passion,” Dina says wistfully as they take an evening stroll together, on their own sweet but romantically timid honeymoon.

It’s here that we experience the flipside of passion, as the filmmakers cap this moment by playing the 911 call placed by a former boyfriend of Dina’s following a violent, terrible event. This is the choice that bothered me a little because the recording is so raw and emotional. Complicating things is that it’s also an incredibly powerful piece of audio, reminding us that, whatever challenges she faces in her future life with Scott, Dina has already survived more than many of us might.

In endlessly covering the most recent US presidential election, most news outlets underplayed a greater global event. Sure, a few news snippets emerged about the migrant crisis in Europe, as millions of refugees fled Syria, Afghanistan and Iraq. But the scale of the event — at least for me — never sank in.

If nothing else, Human Flow corrects that with a you-are-there immersion into the enormous, heartbreaking displacement of millions of desperate people, seeking a new home but often hitting dead-ends both figurative (red tape) and literal (the closed border between Turkey and Macedonia). Maybe the film’s most powerful sequence is its simplest. The filmmaker and his crew wade into the unending phalanx of people flooding the roadsides of Turkey, having recently crossed the Mediterranean. (In 2016, more than 5,000 drowned while attempting that crossing.) Just witnessing the immensity of the crowd — as they trudge through the countryside, dropping with exhaustion to rest on the grassy fields — is tremendously moving.

Ai fills his film with impressive, elegant aerial drone shots of the numberless refugee encampments around the world. He truly shows the enormity of the migrant crisis, which is both a strength and a weakness for Human Flow. Taking side trips into refugee communities as far-flung as the West Bank and Kenya, the movie loses track of the crisis that inspired it, the surge of refugees into the European Union — and the EU’s sometimes shameful response. With more focus and a shorter running time, Human Flow would convey this ongoing tragedy with greater urgency.