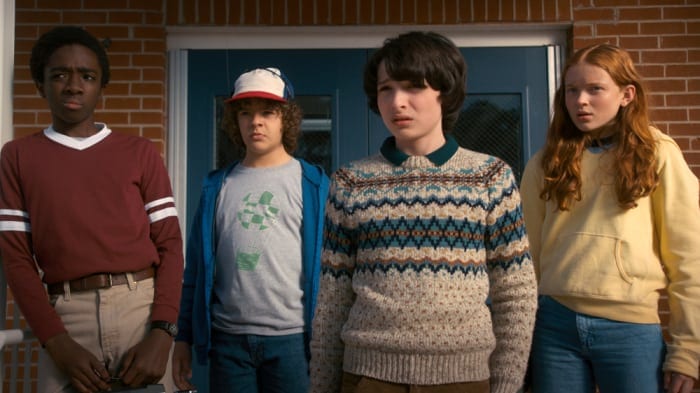 For better or worse, the small screen is where most people do their prime watching, instead of at big-screen multiplexes. Luckily, for the past decade, cable and streaming outlets have delivered far smarter shows than what we get now at theaters, which have become colonized by studios’ loud, all-superheroes-all-the-time franchise flicks.

In our roundup of some of the more notable series and movies now available for streaming, we’re putting the focus on Halloween and spookier fare, along with a couple of original films worth a look.

Stranger Things 2. The unlikely, delightful cultural phenom of summer 2016 returns for a nine-episode second season, shot as before in the Atlanta area (doubling as fictional small-town Hawkins, Indiana). The full season drops today, so by the time you read this, maybe you’ve binged and found out if poor, dead Barb (Shannon Purser) gets a callback, if Eleven (Millie Bobby Brown) has gotten longer hair in the Upside Down, if Dustin (Gaten Matarazzo) still has his lisp, if underfed Nancy (Natalia Dyer) has eaten a cookie and if hysterical mom Joyce (Winona Ryder) has dialed it down a notch. Or ten.

Gerald’s Game. The first of two Stephen King original adaptations on Netflix, this is a great showcase for Carla Gugino, underappreciated throughout her career. She plays Jessie, trophy wife of Gerald (Bruce Greenwood, also terrific), who takes her to their isolated beach house for a sexually recuperative weekend. And then dies, leaving Jessie handcuffed to the bedposts with a ravenous dog in the house and maybe a serial killer (or a scary hallucination) sharing the room with her. The book, published in 1992, was a companion piece to Dolores Claiborne. Both share a solar eclipse, and an incident of incestuous abuse, which was more novel/shocking then than it is now. The Netflix film, nimbly directed by Mike Flanagan (Oculus, Hush, Ouija: Origin of Evil) is notable for a tight screenplay and a watch-it-through-your-fingers scene of Jessie figuring out a bloody way to get out of those handcuffs.

1922. The second King adaptation comes from a novella in his more recent collection Full Dark, No Stars. Thomas Jane (unfortunately verging on a Billy Bob Thornton Sling Blade parody with a grunting blue-collar performance) plays a Nebraska farmer who comes up with a terrible way to dispose of his wife (Molly Parker). Rats are involved. So is his teenage son (Dylan Schmid), which leads to a spiral of remorse, guilt, paranoia and worse things. Decent, but a little earthbound by comparison to Gerald’s Game. The Meyerowitz Stories (New and Selected). There’s nothing scary about writer-director Noah Baumbach’s latest dramedy, unless messy, complex family dynamics give you the creeps. His best movie since The Squid and the Whale stars Dustin Hoffman (wonderful) as a semi-prominent, infinitely vain New York sculptor. His children include stay-at-home dad Danny (Adam Sandler), who comes to town to take his daughter (Grace Van Patten) to college; an uptight personal wealth manager Matthew (Ben Stiller); and dowdy Jean (Elizabeth Marvel). As usual, Baumbach’s script is an overlapping concert of self-satirizing bohemian dialogue; he both celebrates and crucifies a particular sliver of artsy New Yorkers. But there’s emotional heft here, too. And the movie is a reminder that Adam Sandler, as he was in Paul Thomas Anderson’s Punch-Drunk Love back in 2002, is a really compelling dramatic actor. Too bad he spends most of his time churning out crap.

Also: Joan Didion: The Center Will Not Hold. Available on Netflix starting today and directed by Didion’s nephew Griffin Dunne, this documentary is said to focus largely on the loss of both the writer’s husband and daughter in a short time. That dual tragedy inspired her book The Year of Magical Thinking, later adapted into a one-woman show by playwright David Hare. Hare and Vanessa Redgrave, who played Didion’s alter-ego onstage, are among the movie’s talking heads.

Lore. The idea behind this anthology series is so good, it’s a shame the result is this dull. Based on a popular podcast, and filmed in Georgia, the six-episode series centers on spooky, fact-based tales from history. Ghosts, werewolves, evil dolls — you name it. Personally, I always found the podcast a little self-important, but most episodes last less than half an hour. Most of the streaming episodes push toward the 45-minute mark, and they tend to feel padded, with overwritten earnest dialogue and narration. (The animated interludes, though, are nice.) The good actors featured include Campbell Scott, Colm Feore, Robert Patrick and familiar Atlanta face Steve Coulter. The Witch is dark and spooky.

The Witch. It’s two years old, but first-time director Robert Eggers’s thriller about the supernatural in Puritan New England will get under your skin. Anya Taylor-Joy (Split) plays the teenage daughter of a devout family living in the wilderness, beset by bad luck and superstition. But there’s no Crucible-like metaphor at work here. In the movie’s ballsiest choice, it takes witchcraft, and the devil, quite seriously. The movie is gritty, dark, spooky and a promising film debut. (Sadly, Eggers hasn’t followed up with anything since.)

American Horror Story: Roanoke. If you like your scares trashy and over-the-top, and don’t mind that logic, common sense and narrative rules get thrown out the window from episode to episode, Ryan Murphy’s anthology may be your thing. The best thing about this installment is it showcases his game cast of rep actors from previous seasons: Sarah Paulson, Kathy Bates, Angela Bassett, Denis O’Hare and Lily Rabe. Sadly, no Jessica Lange in this season.

One Mississippi. The second season of deadpan comic Tig Notaro’s semi-autobiographical comedy is scary in unexpected ways. Extending a sub-theme in its first season, about the ways sexual assault/abuse on women and girls have historically been ignored, this six-episode run proves spookily prescient. That’s when Tig’s radio producer Kate (Stephanie Allynne) gets “masturbated at” by a male superior during a meeting at their station. Really? Before the Weinstein revelations, who knew that this was a thing? (Oh, sorry: women did.) While the show started off as a fish-out-of-water comedy about out lesbian Tig returning to her Gulf Coast hometown, it has struck increasingly challenging notes.

And, of course, if you’re a Hulu subscriber and want to watch something really terrifying, celebrate your first Trump Halloween with Elisabeth Moss, Joseph Fiennes, Ann Dowd and the rest of the cast of The Handmaid’s Tale.