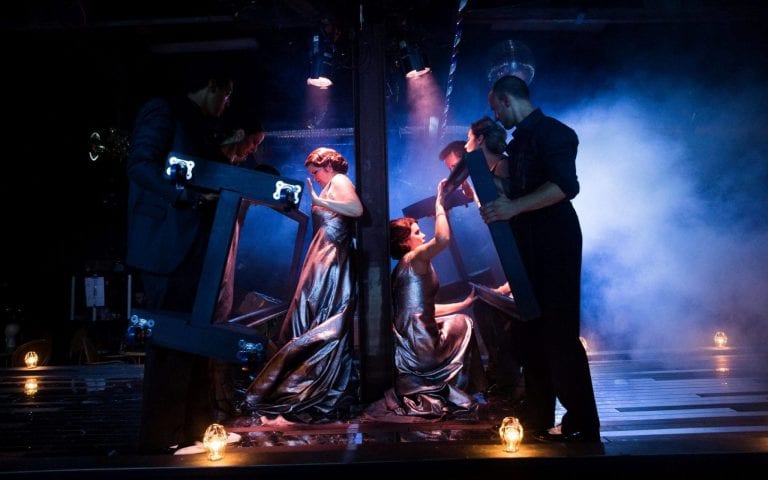 The Seven Deadly Sins made good use of the performance space at Paris On Ponce in September of 2017. Thanks to a new Blank Foundation grant, the Atlanta Opera can continue with its popular Discoveries Series. (Photo by Jeff Roffman.)

If you’re a fan of opera in unusual places, you’re in luck. More is coming your way.

The Atlanta Opera announced today that it has received a $1.2 million, three-year grant from the Molly Blank Fund of The Arthur M. Blank Family Foundation. The gift will allow the company to continue its successful Discoveries series — which places small productions of chamber works in unusual venues around town — and the Studio Tour — which has the young artists of The Atlanta Opera Studio performing an abridged opera at schools and performance centers across Georgia — through the 2020–21 season. The Opera previously received a $600,000, two-year grant from the Molly Blank Fund to support the Discoveries series and Studio Tour in the 2016–17 and 2017–18 seasons.

“The Blank Foundation’s confidence in our vision is deeply encouraging,” said Tomer Zvulun, the company’s general and artistic director. “Atlanta has shown that it has an appetite for sophisticated, unusual performances as demonstrated by the sold out houses we experienced in recent shows. This generous gift will allow us to continue to expand our programming and increase the quality of performances as we reach new audiences in diverse locations in the city.”

The Discoveries series launched in the 2014–15 season and was nominated for an International Opera Award in 2016, a first for the company. The company has presented six operas as part of the Discoveries series: Jake Heggie’s Three Decembers, Schubert’s song cycle Winter Journey (Winterreise), David T. Little’s Soldier Songs, Piazzolla’s Maria de Buenos Aires, Mozart’s The Secret Gardener and, most recently, Kurt Weill and Bertolt Brecht’s The Seven Deadly Sins.

The Discoveries series presents operas in alternate venues, including the Alliance Theatre, Conant Performing Arts Center at Oglethorpe University, the Rialto Center for the Arts, Le Maison Rouge at Paris on Ponce and the Atlanta Botanical Garden. The previous three Discoveries series productions were all sold out, and both Maria de Buenos Aires and The Seven Deadly Sins added two and four performances, respectively, due to demand for tickets.

In his review of the February 2017 production of Maria de Buenos Aires, ArtsATL critic Mark Gresham wrote that the setting of the red-velvet nightclub Le Maison Rouge “surrounded the audience with action at close range” and that “the intimate approach and the venue’s evocative ambiance truly lent power to the performance.”

The Molly Blank Fund of The Arthur M. Blank Family Foundation was established after Mrs. Blank’s 2015 death at age 99, to continue the pursuits of causes and organizations in which she believed. The focus of the grant making is on programs that address the interests Molly supported in her lifetime, including at-risk youth, arts and culture and Jewish causes emphasizing social justice and interfaith coalitions.