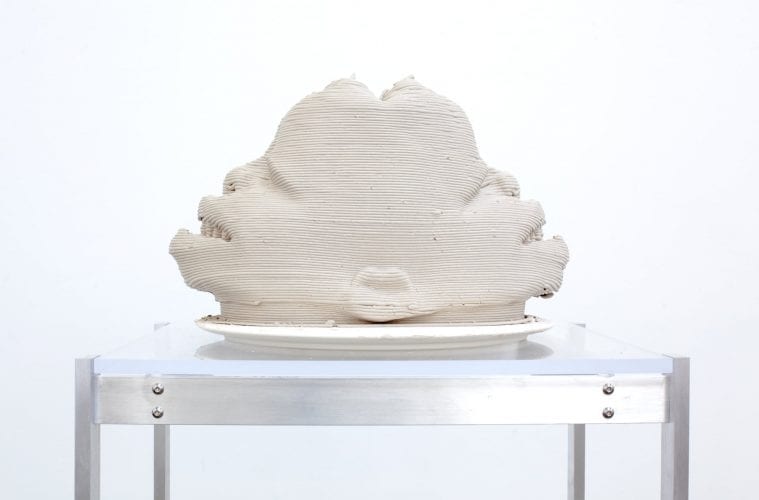 Over four decades ago, Atlanta Contemporary originally opened as the home of the artists’ cooperative Nexus, generating much of the foundational lore of the city’s contemporary art scene. That story is so widely known that it hardly needs to be recounted again here. What is more open for debate, however, is how the museum’s relationship to that scene has evolved as Atlanta Contemporary’s visibility has increased across the South and the country. Particularly, does the institution have a responsibility to show work by Atlanta- or Georgia-based artists?

Each of the museum’s two current headline exhibitions — Anna Betbeze’s Venus and Matthew Angelo Harrison’s Dark Povera Part 1, both on view through December 17 — engage that complicated relationship in indirect but interesting ways: Betbeze is a Georgia native who continues to make work here despite now living in New York, and Detroit artist Harrison’s show draws much of its source material from Atlanta-based collections of African art.

Whether it is intentional or not, these exhibitions appear to represent a fresh, wry response to the critiques that have occasionally beset curator Daniel Fuller since he arrived at Atlanta Contemporary in late 2014. In the wake of last year’s group exhibitions The 5th of July and It Can Howl, which featured work by New York- and Los Angeles-based artists such as Martine Syms, Nancy Lupo and Katherine Bernhardt — as well as the more regionally inclusive revival of the Atlanta Biennial, co-curated by Fuller, ART PAPERS editor Victoria Camblin, Jacksonville-based independent curator Aaron Levi Garvey and Joan Mitchell Center director Gia Hamilton of New Orleans — there has been some local hand-wringing about whether Atlanta Contemporary’s exhibition schedule prioritizes Georgia artists or the rising stars of the New York scene. 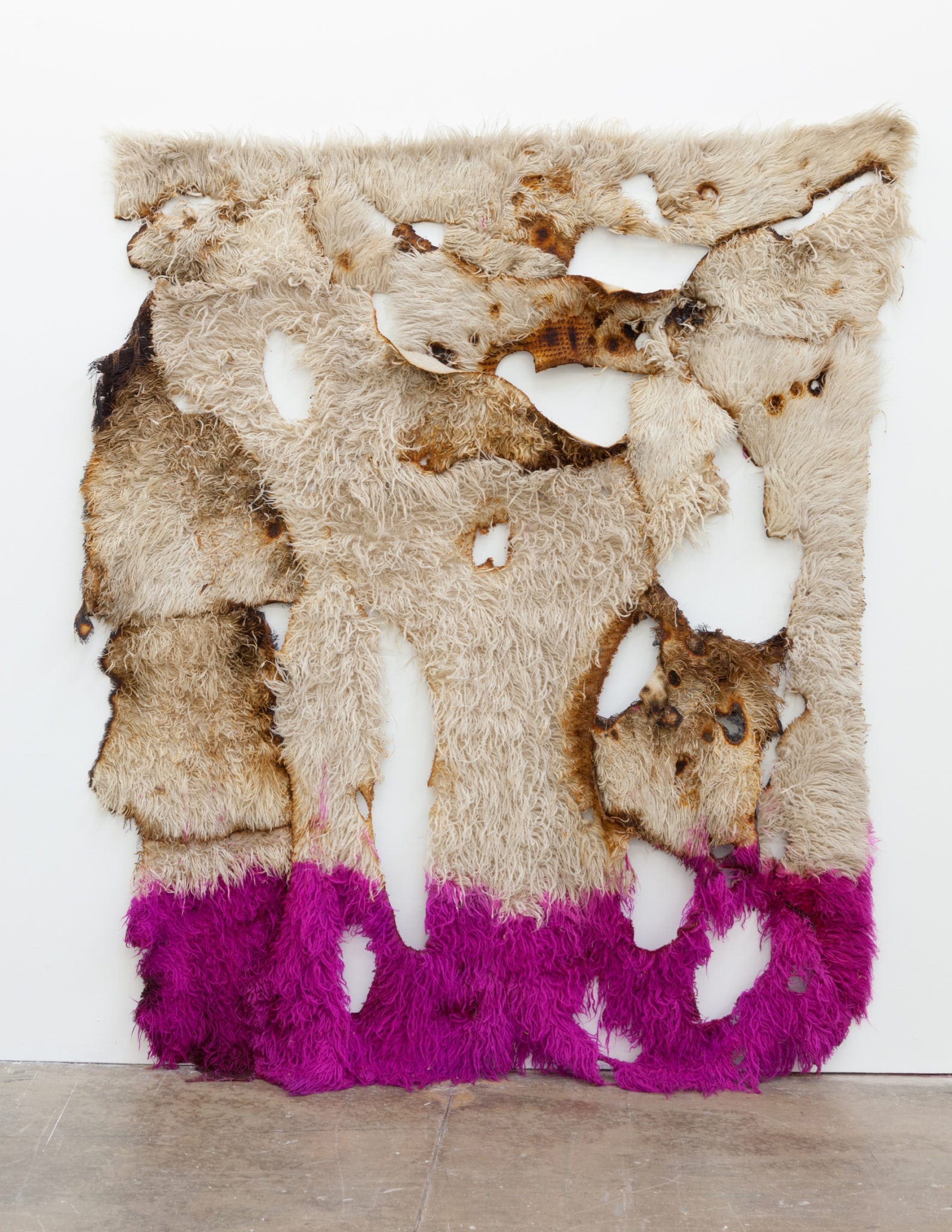 Those categories, however, aren’t necessarily mutually exclusive. Betbeze holds an MFA from Yale, has shown at New York galleries including Kate Werble and Thierry Goldberg and was a 2013 recipient of the Rome Prize. But before garnering any of those accolades, she grew up in Columbus, Georgia, and attended UGA’s Lamar Dodd School of Art. Though she mostly resides in New York, Betbeze repeatedly returns to Georgia to work, and Venus includes pieces created in both locations. The exhibition’s title conjures both mythological and astronomical associations, and the primary medium of the work on view — the wool of the shag rugs Betbeze has distressed and distorted — makes it difficult to resist considering a further literary one, the 1870 novella Venus in Furs by the Austrian writer Leopold von Sacher-Masoch, from whose name the term “masochism” is derived.

To create the three large-scale woolen wall hangings in Venus, Betbeze unleashes a barrage of techniques on traditional Greek carpets called flokati rugs: cutting and sewing, burning and singeing, dying with acid-bright colors. (When she began working with flokati rugs nearly a decade ago, Betbeze says she spent hundreds of dollars on dyes from Manic Panic, the legendary punk boutique on St. Mark’s Place.) In keeping with the masochistic tendencies outlined in Venus in Furs, the playful violence wrought upon Betbeze’s carpets transcends destructiveness and opens up new worlds of lush, sensual pleasure.

For the two smaller wall hangings, Venus and Pink Sun, Betbeze layers torn and matted carpets whose edges have been singed, turning the off-white wool varying shades of golden brown and black. Each of these pieces contains a single shock of vivid color: a darkly verdant corner on the lower left side of Venus, and a layer of rich magenta across the lower portion of Pink Sun. With their overlapping sections enclosing irregular gashes and holes, these two fragmentary tapestries almost resemble a collection of otherworldly animal pelts. The third textile sculpture, Opus (In the Flamboyant Grass), is the product of similar methods but, as its title suggests, takes on a much grander scale. 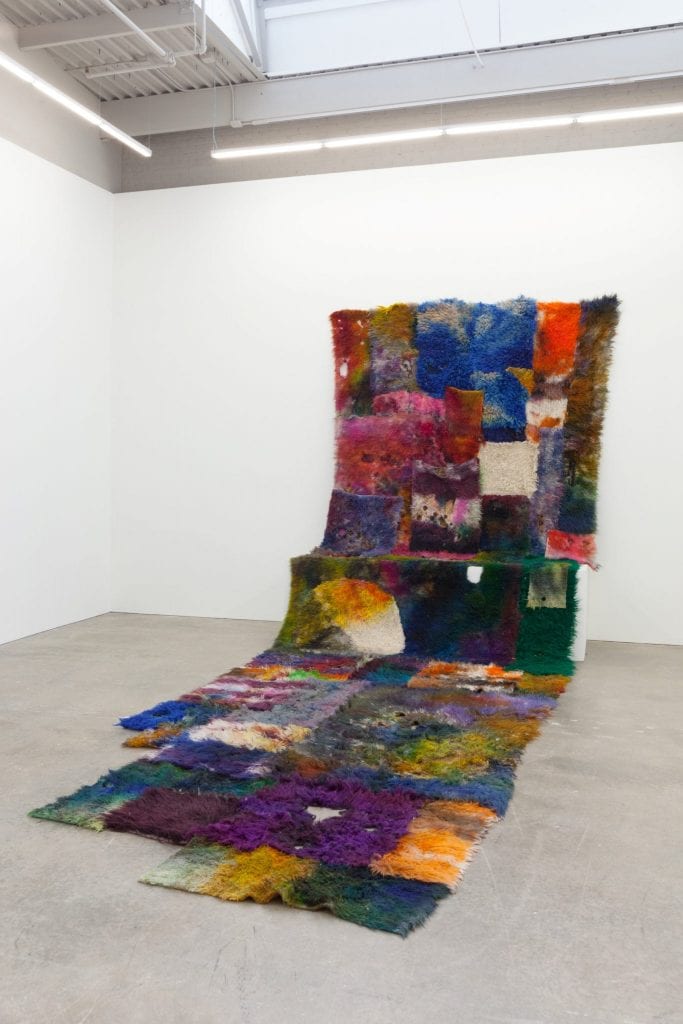 Cascading down the wall, over a raised platform and across the gallery floor, Opus interrupts the space with such a lavish presence that the other wall hangings seem restrained by comparison. Though it also sports burn-marks and blemishes, the composition of Opus assumes a sort of organic geometry, with portions of dyed fabric cut into rectangular and square shapes whose colors bleed into each other. Instead of isolating bursts of color, in Opus Betbeze unfurls a ravishing panoply of hues ranging from deep purples and greens to faint pinks and yellows. Whereas Venus and Pink Sun offer a vague sense of their components’ beginnings as animal products, Opus feels like a living thing itself, neither animal nor human but somehow universal. Depending on how near or far you are from its surfaces, Opus appears to contain distant swirling galaxies yet also stands in for the natural world that encompasses all earthly life.

Delicately but forcefully deployed by Betbeze, this vacillating sense of scale is one of the exhibition’s most gratifying gifts to viewers. The enormity of Opus in particular, which suggests the influence of enveloping installations by American textile artist Sheila Hicks, serves as a reminder of the smallness of human life but also offers its own small revelations through particular textures and tactile delights. The place for human activity amidst these swirls of cosmic color is further complicated by Hunters, which comprises a clothing rack hung with mysterious garments such as dyed robes, swatches of fur and other fabrics. Though nearby wall text prohibits touching or wearing these items, the sensation of doing so creeps across the viewer’s shoulders and down her back. Perhaps Opus is similarly a cape for a goddess, or else leaves of grass, or the fabric of the universe.

If Betbeze’s personal history and practice raise questions about how location and identity affect creative production, Matthew Angelo Harrison’s work confronts those questions head-on. Like the members of the arte povera movement obliquely referenced in the title of his exhibition, Dark Povera Part 1, Harrison strives to break down conventions around what distinguishes art objects from the seemingly ephemeral, but with a 21st-century twist. Instead of working with rags and twigs like his Italian predecessors, Harrison uses custom 3D printing technology to create altered copies of African artifacts such as masks and statues. 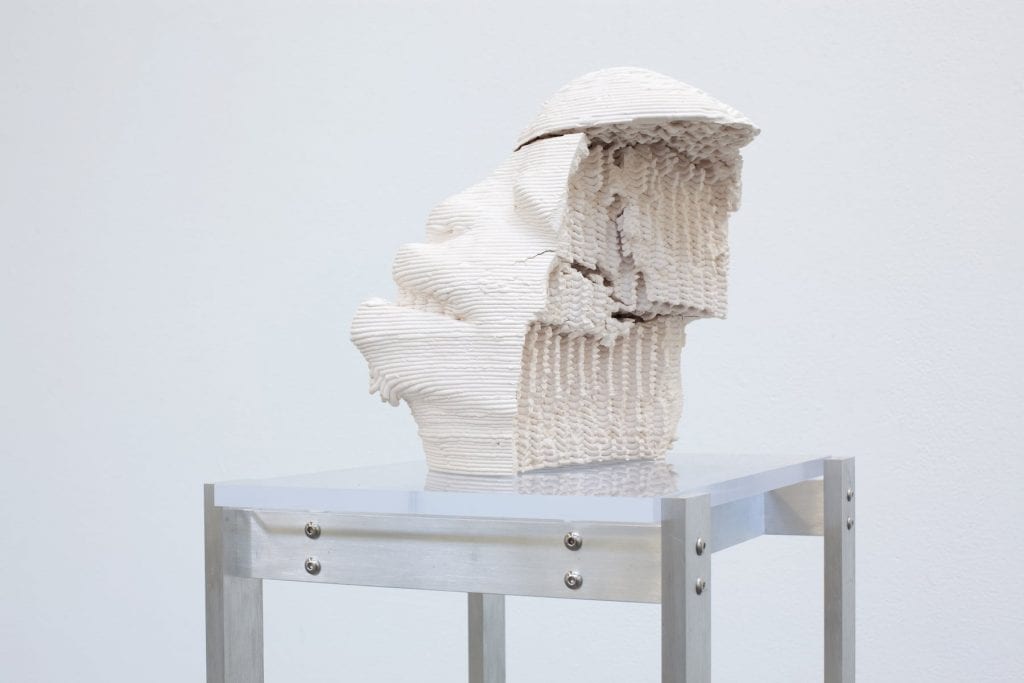 In preparation for this exhibition, Harrison traveled from Detroit to Atlanta twice to visit private collections of African sculpture and recorded detailed information about these artifacts using a 3D scanner. Using these files and hand-built 3D printers, Harrison then produces copies of the original authentic items. His process, however, deviates significantly from standard 3D-printing techniques. Instead of producing objects made with silicone or other synthetic plastics, Harrison’s copies are made with clay, challenging assumptions about how an object’s material relates to its aura of authenticity. Additionally, Harrison sets his printers to modify each successive copy he produces, further stretching the conceptual distance between each new sculpture and the original source material. Thus, while clearly resembling each other, the resulting sculptures are each unique. Where one may appear as a straightforward copy of an original bust, a second may only be printed halfway to completion, revealing the crisscrossing internal structure familiar to anyone who has witnessed 3D printing, and a third may split the bust so that it shows two faces instead of one.

Harrison’s work uncannily straddles categories that tend to be considered dissimilar: exoticized traditional sculpture and high-tech plaything, clay artifact and mass-produced fabrication. As Pistoletto and other arte povera artists were responding to the ravaged post-industrial landscape of Italy in the late 1960s, it is fitting that Harrison’s 3D-printed sculptures are being crafted in Detroit, the city formerly synonymous with robust American industry, and post-industrial aesthetics are apparent throughout Dark Povera Part 1. Most notably, Harrison’s monumental 3D printer is on display in the center of the exhibition and was active during its opening at Atlanta Contemporary’s Art Party in August. 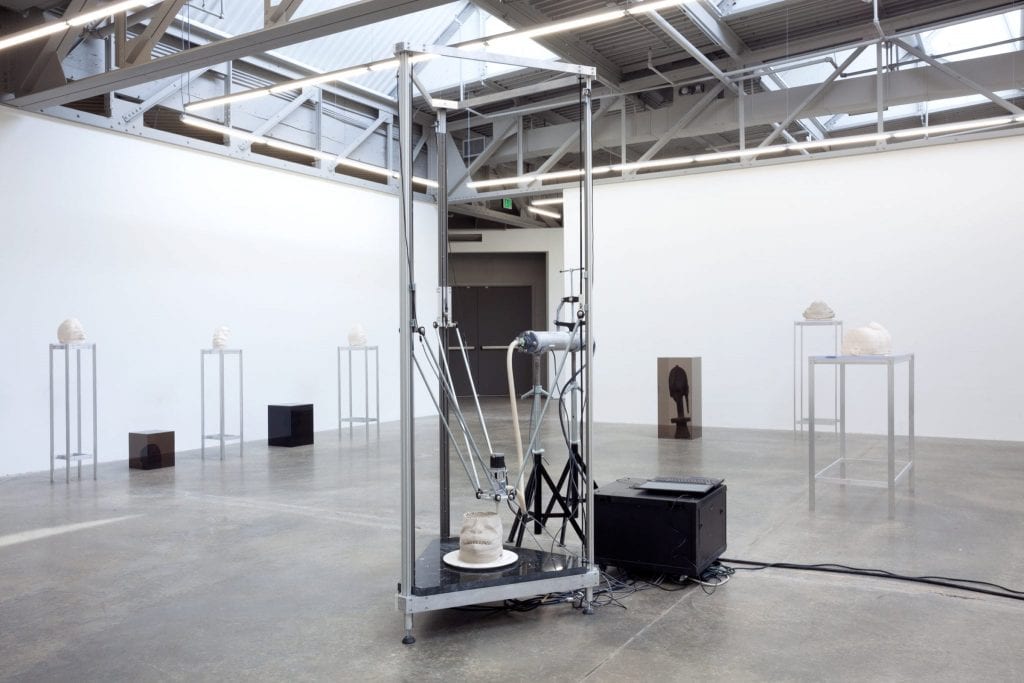 Surrounding the printer, raised tables made of aluminum and glass are arranged throughout the gallery, bearing Harrison’s 18 newly printed sculptures. Beside and below these tables, the 10 original artifacts are enclosed in semi-opaque tinted glass vitrines installed on the gallery floor. This gesture of elevating the copy over the original has obvious implications in the realm of appropriation art, but Harrison’s point is more incisive. Given that African artifacts, whether originals or replicas have been used as interior design elements for decades, Harrison is rightly suspicious of how aesthetic value and supposed scarcity can paradoxically both exalt and trivialize an object. Importantly, Harrison has also acknowledged how his explorations of authenticity and metamorphosis reflect differences and exchanges between African and African American cultures. As thoughtfully as these dynamics are approached, more specific information about the source material may have prevented it being overgeneralized as “African” sculpture as opposed to artwork belonging to particular cultures within the continent.

Like Betbeze, Harrison has attracted his share of attention from coastal art hubs far from Atlanta and his native Detroit. His work is currently on view in Fictions at the Studio Museum in Harlem (alongside pieces by Atlanta artists Paul Stephen Benjamin and Krista Clark), and he is preparing for a solo exhibition next year at San Francisco’s Jessica Silverman Gallery. Does this, as some critics may suggest, somehow make Harrison’s work extraneous to the curatorial responsibilities of Atlanta Contemporary? Does Betbeze’s Ivy League MFA make her less of a Georgia artist?

These exhibitions don’t offer easy answers to such cynical questions, which effectively suggest that Atlanta would be better served by insular local showcases. Both shows, however, explicitly involve personal and cultural connections to Atlanta and Georgia — and, what’s more, Atlantans can see them for free. No single institution can bear the responsibility for promoting local artists (especially on top of offering studio space for over a dozen of them, as Atlanta Contemporary does), but all museums must work to become more accessible to the public. There is no better first step toward this goal than providing free admission, and in that regard, Atlanta Contemporary remains a singular and indispensable institution in the city it serves.