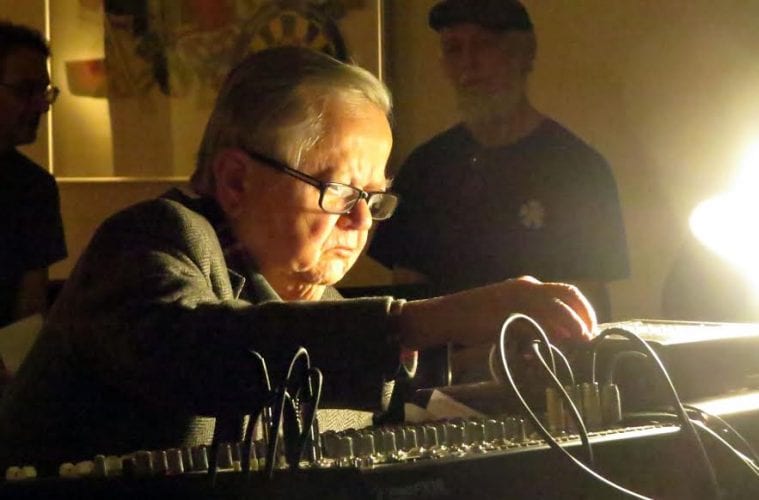 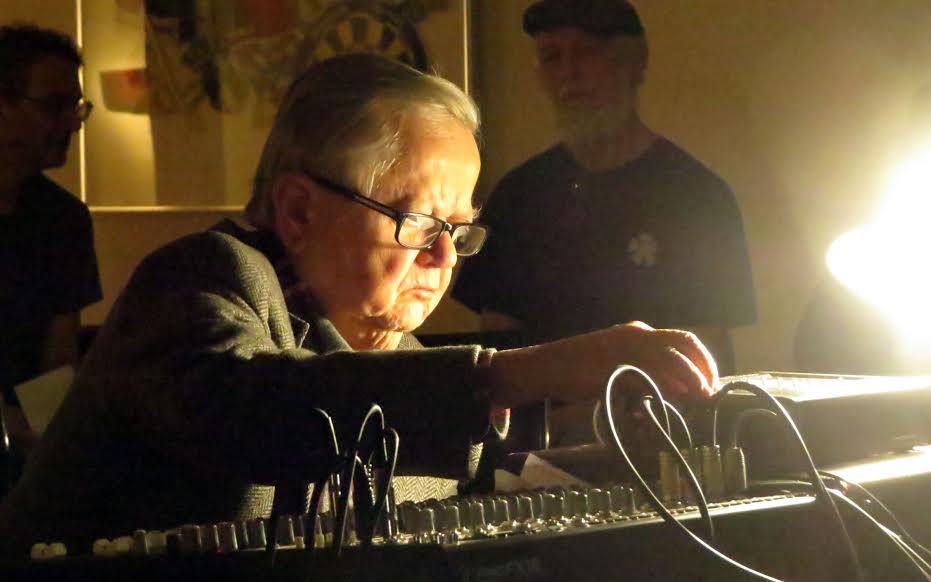 Dick Robinson was a violinist for the Atlanta Symphony Orchestra, and also pioneered electronic music. (Photo by Mark Gresham)

On Sunday’s sunny afternoon, the Museum of Contemporary Art of Georgia was host for a concert of electroacoustic music by longtime Atlanta composer Dick Robinson. At 92 and still active at his craft, Robinson can easily claim title as Atlanta’s oldest composer, as well as one of its genuine living pioneers in the realm of electronic and electroacoustic music, largely inspired by Robert Moog in the 1960s.

The concert could have as easily been called an exhibit of music as it was an old-fashioned session of prerecorded quadrophonic works, something far less common today than it was even three decades ago, when the quadrophonic concert format was still considered rather avant-garde in this city.

With speaker columns in the four corners of the performance space, Robinson positioned himself at a table in the center, armed with a compact Tascam DR-680 eight-track digital audio recorder, a Mackie ProFX16 16-channel 4-bus mixer, a desk lamp and a briefcase (which served as a platform for the Tascam deck). The audience surrounded Robinson, seated in concentric circles. It offered up a good, spatially intimate atmosphere for deep listening.

Robinson’s opening selection was also the oldest: “Ambience,” which he composed in 1969. It was a co-winner of the Dartmouth International Electronic Music Competition the following year. Robinson derived his source material from a home-built instrument made of three bass guitar strings mounted on a long board. Metal pipes were then either slid up and down the strings or rocked across them creating groaning glissandi or a rhythmic texture that were then transformed and mixed into the final four-channel recording.

“Narrative” (2010) opened with a rain-like sound which evolved into hollow tones whose timbres are subtly changed by selective emphasis of one or more harmonic overtones. The result was an extremely subtle work, with some sounds barely perceptible.

The poem “Leaving Cumberland” by Atlanta writer Jo McCreary, was set to music by Robinson in 1996. The title refers to Cumberland Island, the largely uninhabited island off the Georgia coast. The collaborative work appears on Robinson’s CD, Electroacoustic Music Vol. II. McCreary’s own reading of the poem is incorporated in the recording, sounding evocative and distant, part of the musical texture, rather than as up-front narrative.

With the audience’s encouragement, Robinson skipped the intermission and forged right ahead with “Plexic” (1989). The piece was originally one of a series of compositions Robinson wrote for a collaborative project with site-sculptor Scott Gilliam. The sculpture, with two cassette tape players mounted on it, was erected in Socrates Sculpture Park in Brooklyn as part of a New South Group art event in 1989. The shortest piece on the program at just over three-and-a-half minutes, “Plexic” featured synthesized sounds of a pingy or  “plucked” character.

Robinson had originally planned to include his six-minute “Sturgeon River” (2009) on the program, a pastoral reflection upon his childhood memories of the Namekagon River in Wisconsin (“Namekagon” means “ land of the sturgeon” in the Ojibwe language). However, he substituted an earlier work, “Constellation” (2004), which is based primarily upon sweeping ribbons of sounds comprised of broad tone clusters.

Just as the opening piece as the earliest-composed work presented, the final item on the printed list was the most recent of them. “Fantasy” (2015) exploits the evolving interactions of three different kinds of sonic textures: aggressively bold sounds, dream-like harmonies and what Robinson calls “roaring granular” sounds (think of hard rain or a passing train as good examples).

After a very few questions from the audience, Robinson played an encore, “Destiny at the Millennium” (1999), based around a poem of the same name by Atlanta author and ArtsATL contributor Jerry Cullum. As with McCreary and “Leaving Cumberland,” Robinson created the piece by recording Cullum reading his poem then surrounding it with a musical sonic environment, but in this instance with more presence given to Cullum’s voice.