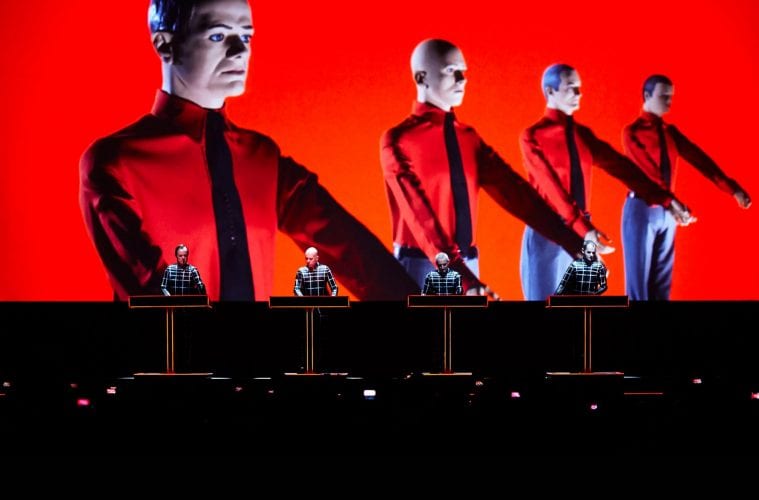 Kraftwerk, one of the most important and innovative musical groups of the past half century, played a sonically and visually stunning set to a sold-out crowd at the Cobb Energy Centre on Tuesday night. The joining of their iconic, minimal, cool, controlled dance-friendly songs with four exactly dressed, barely moving musicians and 3D visuals is the culmination of a unified aesthetic whose origins date back to late 1960s Germany.

An appreciative crowd composed equally of old and young fans filled the venue. Many, including me, knew every note and musical phrase, and thus (as with other musical dinosaurs still striding the earth) the show was as much a museum piece as a live performance. And Kraftwerk presents itself as a catalog of music, in two hours packing in most of the key moments from their string of six classic records from 1974 to 1986 and as a unified work of art.

An early version of their current 3D show that initially appeared at MOMA, the Tate Modern in London and elsewhere “confirmed Kraftwerk’s position as major exponents of contemporary German art.”

This 21st-century return to touring was made possible by technology: laptops and software synthesizers allowed the band to recreate its hardware synth works with tablet computers. This also created the iconic look of the tours: four performers standing at four identical podiums – no instruments in sight. Their onstage presence led many early commenters on these tours wondered if they were even playing music, conjecture which was put to rest by Tuesday night’s show.

Kraftwerk’s music and aesthetic has long focused on the “man-machine,” the mirror/alliance/conflict between humans and technology. That the group“performed” was made clear by both the synergy evident between the (three musical and one video) performers, but also by a few lapses, in which the music felt a bit off, or a solo seemed stiff.

These merely human miscues were brief, and largely the unit crafted engaging, living works of electronic music and visuals out of their their well-known catalog. In fact, the moments of confusion at some shaky spots were the honest realization: these are men, not machines! So complete is Kraftwerk’s art of mixing the two that my surprise at those moments was genuine.

Another instance in which the group showed itself more Mensch than Maschine was the occasionally unsure vocals of cofounder Ralf Hütter. Kraftwerk’s vocals walk a line of controlled expressionism: some lyrics (“Neon Lights,” “Computer Love”) are sweetly affectionate, while most are ambiguously or neutral in delivery. In a live setting, this cool delivery is sometimes harder to achieve.

The sweetness of the particularly well-sung “Neon Lights” was balanced by the cautionary, terrifying, “Radioactivity,” the key song in Kraftwerk’s somewhat late, more overt, embrace of art as activism. With a similar shift toward using their music toward political or social change, the lyrics to “Computer World” have been adjusted since 1981. The addition of “KBG / and CIA / Control the data / memory” more clearly states the frightening power of technology.

“The Man-Machine” too, emphasizes the band’s more thorough approach to making not just electronic music, but art, presenting the band’s leitmotif: the human-technology relationship. As Hütter told Rolling Stone in 2009,  “This rhythm, industrial rhythm, that’s what inspires me. It’s in the nature of the machines. Machines are funky.”

Unlike musical acts of the 1960s, looking backward to Enlightenment ideas of peace, love, social justice, and revolution, Kraftwerk looks ahead: to machines gradually infiltrating every aspect of human life. Whether for better or for worse is left unclear: it is simply a fact, and this plainspokenness is emblematic of the band’s lyrics, which are few, direct and declarative (“we are the robots”; “radio-activity/is in the air for you and me”; “I’m the operator with my pocket calculator”).

One member of the quartet live-controlled the graphics paired to each song. Many of the visual passages followed fairly strictly from art created originally in the 1970s and ’80s, simple wireframe images evoking the early days of computer graphics. Often the strongest visuals were the least “3-D” (although the huge Spacelab’s passage over the audience elicited ooh’s and ah’s).

Kraftwerk has long-plumbed questions of autonomy and identity in a machine age, and the semi-anatomically correct Robots that appeared on stage, replacing the performers, for “The Robots” made the point. Four minimally moving humans were replaced by four minimally moving Robots: or had they? (“Hütter said that seeing these robots was no better or worse than seeing the band members themselves. ‘The robots are members of Kraftwerk.’”) The audience certainly loved the Robots, who gyrated through the track, programmed to dance for the crowd’s delight.

The band retains its ambiguous position with respect to the relationship between humans and machines — at times it is wonder-filled, at times ominous. “Spacelab,” a loving paean to spacecrafts’ promise of freedom, played to the crowd with graphics showing a flying saucer eventually coming to rest in front of the Cobb Energy Centre, to joyous cheers from the locals, who clearly wanted to hitch a ride.