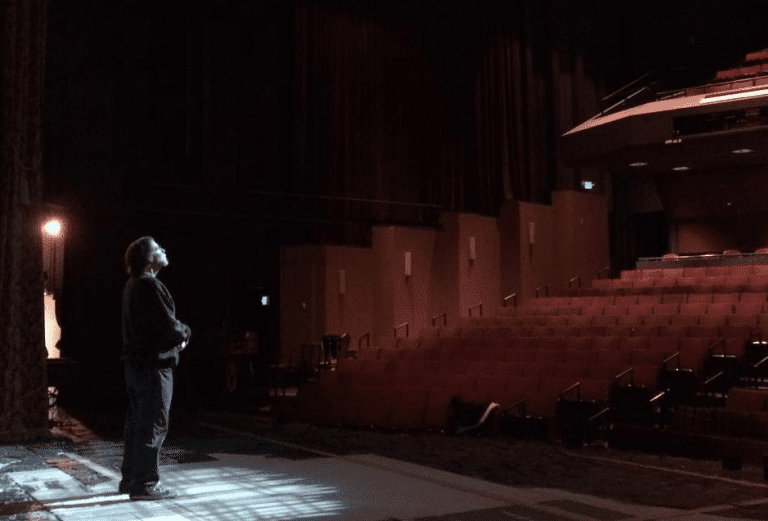 Shinn on the darkened stage he called home. (Photos courtesy the Alliance Theatre)

(Editor’s note: The Alliance Theatre will celebrate the life of Pete Shinn, the theater’s longtime lighting designer and master electrician who died in July from cancer, at a memorial service on Monday at 4 p.m. in the main theater. It will be followed by a reception. The Alliance has also set up a memorial fund in Shinn’s honor. His career at the Alliance and in the Atlanta theater community spanned 38 years. He designed more than 60 productions for the Alliance and countless others in theaters around Atlanta including Actor’s Express, Horizon Theatre, Theatre in the Square and Georgia Ensemble Theatre. Susan V. Booth, the Alliance’s artistic director, wrote this remembrance of Shinn exclusively for ArtsATL.)

For close to 40 years, Pete Shinn made the beautiful visible — all while remaining largely invisible himself.

Well, invisible to the folks in the audience. But to those of us who are lucky enough to call the Alliance our home, he was indelibly present. When he passed away this summer — after 38 years of employment at the Alliance Theatre — he left a space that no one will ever fill.

Pete was our master electrician, our resident lighting designer, and a fabled institution with a fan club that spreads across the country. But you’re not about to hear the typical words of eulogy that evoke Hallmark cards and Lifetime movies. Nope. Pete was an irascibly idiosyncratic wonderland, who could work blue with a breathtaking speed and elegance. He could watch puppies cavorting with children and never crack a smile. At least not one that you could see, unless you were really close to him. (The funny truth of the matter is that he was hopelessly devoted to both dogs and kids. He just didn’t want that to get out.) He had a truly wicked sense of humor, and a seemingly inexhaustible supply of salty limericks, which he would send me whenever I had the temerity to get sappy.

What Pete cared about was beauty. Glowing, illuminated, deeply moving beauty of the theatrical variety. He knew that the perfectly revealed moment of stagecraft could change lives, and it mattered that deeply to him, whether he was working on a beloved classic or a brand new play from a just-out-of-school writer. So long after anyone else would have said, “That’s good enough,” Pete would still be at work. Because “good enough” was never good enough.

I adored Pete. He scared the daylights out of me for years and when we finally became friends, I felt like I won the lottery. His affection was hard won and deeply felt — and if you were lucky enough to work your way into his good graces, you had a friend for life. 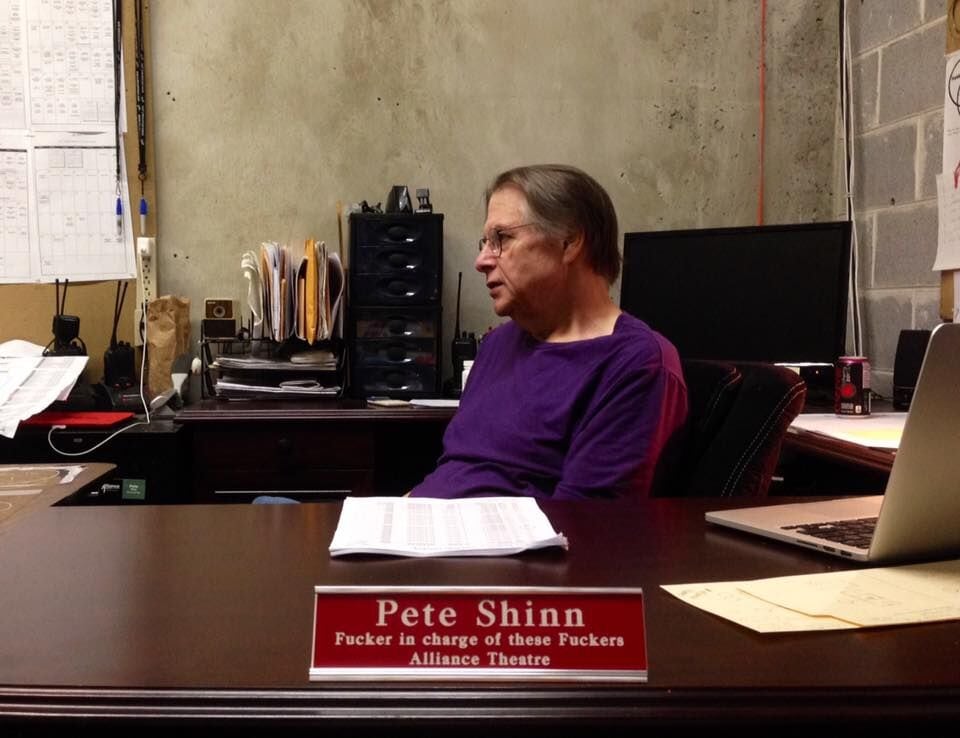 We have all kinds of traditions and superstitions in the theatre, a favorite one being our belief in ghosts that is robust enough for us to leave a light burning on our stages each night. (Ever wondered about those “ghost lights”? Now you know.) If we are lucky, Pete Shinn will haunt us. Who am I kidding – he already is. And he’s telling me to stop being such a sap and to get back to work.

The Alliance has chosen to remember Pete by establishing the Pete Shinn Memorial Fund. This fund, designed with Pete’s blessing, will offer funding for professional development opportunities for technicians and designers across Atlanta. By doing this, the Alliance not only continues Pete’s legacy, but also bolsters our commitment to providing top-notch, award-winning experiences for technicians, designers, craftspeople, and artisans who will carry our art form forward to a bright future.

Pete continued to learn throughout his career — one of the reasons he was such a great asset to his company and the community. The Alliance hopes this memorial fund will allow others the same opportunities Pete had to improve his craft, while improving all of our lives. To learn more about supporting the fund or applying for the fund, visit our Pete Shinn memorial page.