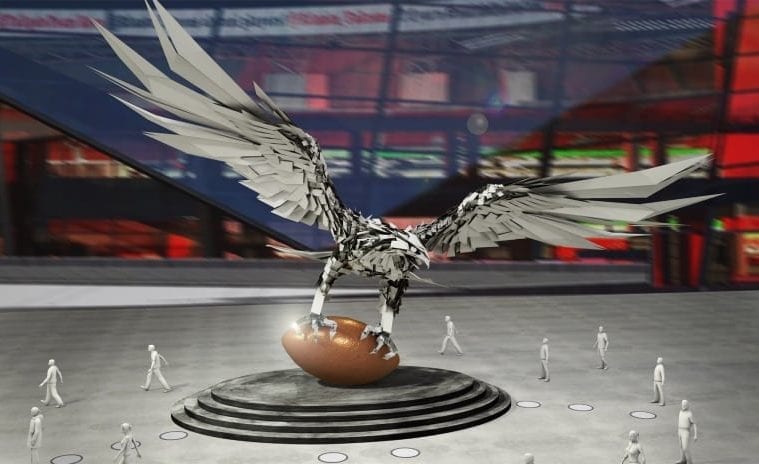 Mercedes-Benz Stadium and the Savannah College of Art and Design (SCAD) announced the artists selected to contribute to the stadium’s comprehensive art collection, including renderings of the two signature sculptures that will be installed. Over 100 works of art have been commissioned for the two-million-square-foot building, which is scheduled to open in the summer of 2017.

“This stadium is meant to reflect what our fans and supporters told us they want, and the art program is no exception,” says Arthur M. Blank, owner of the Atlanta Falcons and Atlanta United FC. “We listened and responded by choosing artists who would bring those sensibilities to the pieces they create; the ideas of community, inspiration, play and excitement will resonate throughout the building.”

The sculptures, which depict a falcon in flight and a soccer ball, are intended to honor the stadium’s home teams, the National Football League’s Atlanta Falcons and Major League Soccer’s Atlanta United. The sculptures will be located on the exterior, community grounds of the stadium to contribute to the greater downtown landscape. The falcon statue, constructed by Budapest’s Gábor Miklós Szőke, will rise 41.5 feet tall with a wingspan of over 64 feet, and will be constructed of stainless steel. The second piece, a mirror-faceted soccer ball standing almost 35 feet high, will be created by Studio Roso of London and will sit by the north entrance overlooking the green space being developed on the current site of the Georgia Dome.

In total, 53 artists, 26 of whom are local, have been selected by SCAD to create artwork for the stadium, including sculpture, painting, drawing, photography, mixed media and digital works. SCAD founder and president Paula Wallace states, “The art of the Mercedes-Benz Stadium is integral to its monumental design and is accessible to everyone within the unrivaled grandeur of America’s newest architectural landmark.”

The local artists’ contributions are part of the stadium’s effort to prioritize the Atlanta community. In February 2016, through outreach to local art galleries, Atlanta media and the Georgia Council for the Arts, SCAD put out a call for local artists to submit portfolios. Over 650 submissions were reviewed, and select artists presented formal proposals for potential commissions.