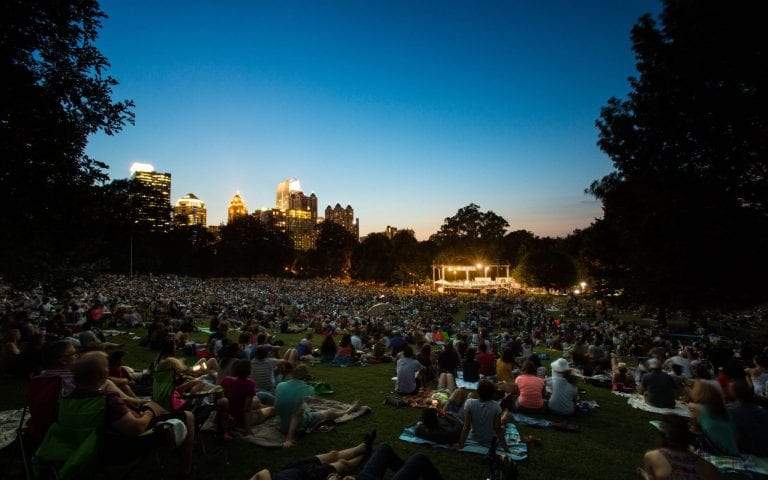 Review: After nearly a decade the ASO returns to Piedmont Park’s Oak Hill

On Thursday evening the Atlanta Symphony Orchestra, led by assistant conductor Joseph Young, performed a free summer parks concert at Piedmont Park. It’s the first time since 2007 that the orchestra has performed in the open-access Oak Hill quadrant located on the park’s southwest side, made possible by Bank of America and the City of Atlanta Department of Parks and Recreation, with additional support from the Loridans Foundation.

In recent years, the ASO has been performing in the park’s controlled-access Promenade area, near the Botanical Garden. For those concerts, free tickets were issued online but would be snapped up quickly, within hours, by those with computer or cell phone access, given the Promenade’s capacity of around 3,000.

By great contrast, in a brief conversation with ArtsATL, Amy Phuong, commissioner of the Department of Parks and Recreation, estimated Thursday’s diverse audience to be over 10,000. Although there were neither tickets nor gated access, it was a well-behaved, peaceful, and joyous assembly of people enjoying music in a large civic gathering. The weather was nearly ideal. Though the high temperature for the day reached into the low 90s, billowy cumulus clouds blocked direct sunlight for a while, tempering the heat, and a good breeze also kicked in after the concert started.

The ASO opened with “The Star-Spangled Banner,” with patrons standing and singing along, followed by Rossini’s Overture to “The Barber of Seville.” Then came John Williams’ “Olympic Theme,” originally written for the 1984 Summer Olympics in Los Angeles — one of four Olympics for which Williams has written music, including “Summon the Heroes” for the 1996 Summer Olympics in Atlanta.

ASO bass trombonist Brian Hecht made his ASO solo debut in what proved to be the most interesting work of the evening: Concerto for Bass Trombone by Chris Brubeck, the son of jazz composer and pianist Dave Brubeck (of “Take Five” fame). In a nod to the concerto’s final movement,  entitled “James Brown in the Twilight Zone,”  Young introduced Hecht by putting on sunglasses and emulating Danny Ray, James Brown’s longtime personal valet and master of ceremonies. Hecht himself came onstage wearing his own shades.

A bass trombonist himself, Brubeck’s concerto is in three movements and incorporates jazz elements much in the manner of his father’s music. The opening movement, “Paradise Utopia,”  and its lyrical second movement, “Sorrow Floats” were pensive and longing in character. The concerto’s aforementioned finale was the last and longest of the movements, funky and often rhythmically spiky, with a cadenza for the bass trombonist that made good use of the instrument’s range, including forays into the instrument’s raspy, harder to produce lowest octave — known as its “pedal tones.”

Not surprisingly, the ASO followed up with a medley of two James Brown songs arranged by Gregory Prechel: the 1965 Grammy-winning “Papa’s Got a Brand New Bag,” a song which was a key influence toward recognition of funk as a distinct popular style, and “I Feel Good” (aka “I Got You”), another 1965 song that became Brown’s highest charting single.

To close the first half of the concert, the audience was invited to join in singing a patriotic number, Samuel Ward’s “America the Beautiful,” arranged by Paul Scott.

The concert’s second half took a solidly classical turn with Beethoven’s Symphony No. 5. By its end, the last vestiges of sunlight were nearly gone and night was upon the gathered audience. Young and the ASO then finished off the evening with an encore, John Philip Sousa’s iconic march, “The Stars and Stripes Forever.”

Overall, the orchestra played rather well given the open-air stage where it is more difficult to naturally hear each other, especially given the absence of any kind of focusing acoustic shell or reflective backdrop. The necessary amplification was a little harsher and a little less balanced than at their previous week’s concert at Verizon Wireless Amphitheatre, but that is the nature of the beast with a freestanding temporary stage in an open park, the trade-off which allows the orchestra to perform for so many people at once.