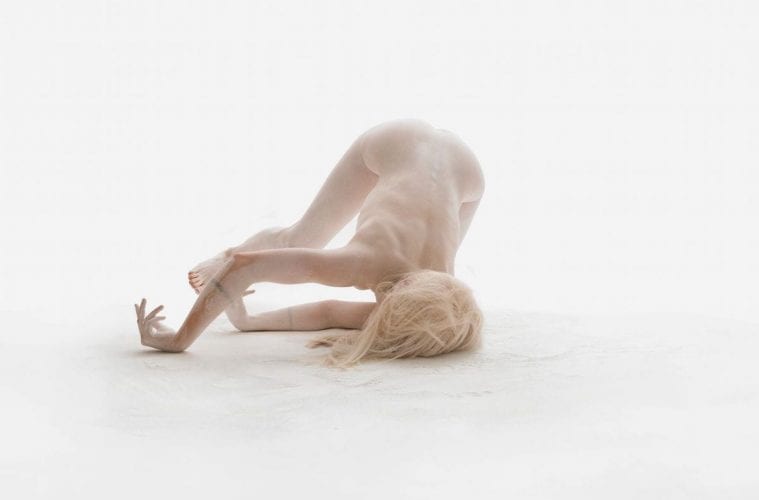 Review: “Through and Felt” group exhibit explores the private and painful aspects of humanity publicly

Sensitive and disturbing, Through and Felt, a group exhibition curated by Atlanta artist Iman Person, exposes private moments of human pain and explores the body and mind through video, photography, performance, installation and sculpture.

On view through June 30 at Eyedrum Gallery, “Through and Felt” is a collection of works by Rita Minissi, Lu Xu, Dana Haugaard, Skye Livingston and Arianna Ferrari. The emotionally- and physically-charged exhibit both repels and seduces, conveying the personal struggles of the artists and inviting viewers into moments to which outsiders would not usually be privy.

The most striking exhibition works were those of Rita Minissi and Arianna Ferrari, whose subjects were the bodies of the artists themselves. In these challenging pieces, the artists subject themselves to some sort of pain or discomfort in order to reach a heightened state of being or understanding.

In Rita Minissi’s photographic self-portraits, she “attempt[s] to express the inexpressible — ” to convey her experience of grief and loss after the suicide of her father. In her unsettling and beautiful images, Minissi captures a version of herself which is formless and uninhibited. Her face obstructed from view by her hair and the contortions of her naked body, the artist writhes in what could be construed as pain or frustration on canvases covered in either chalk, charcoal or terra-cotta. Covering herself in these earthen materials, Minissi represents what occurs to the body after death. Particularly beautiful is Minissi’s “Formless Memory,” a piece within the terra-cotta series. Posed with such elegance and grace, Minissi creates haunting beauty even in the face of terrible grief and suffering. Similarly evocative are the three videos created by and featuring Arianna Ferrari. In her series, Will to Power as Disappearance, Ferrari performs a physical and psychological experiment as she tests her ability to withstand the influence of sleeping medication. In this disquieting yet captivating series, Ferrari records the effects of sedatives following prolonged sleep deprivation. According to Ferrari, she “identif[ies] [her]self with [her] mind; therefore [she is her] mind, not [her] body.” By consciously attempting to reject the physical effects of sleeping medication, Ferrari seeks to return “autonomy” to her body and release it from the “yoke” of her mind. Naked and seated on a wooden floor with her head hanging low, her face hidden by her hair, Ferrari twitches and jerks as she struggles to stay awake until she ultimately succumbs to the sedatives. These works are a very personal view into moments of self-destruction (or in the case of Ferrari, perhaps self-determination) to which others would not usually be welcomed. We are invited to witness turmoil of the artist’s mind and body — equally unsettling as it is inexplicably hypnotic.

“Through and Felt,” with its strange and perhaps uncomfortable subject matter, is uniquely mesmerizing and beautiful, and made even more engaging by the curatorial design of Iman Person. It is a captivating and disturbing exhibition, gracefully curated and featuring works that both surprise and intrigue, strengthened by their honesty and unhampered by pretense.