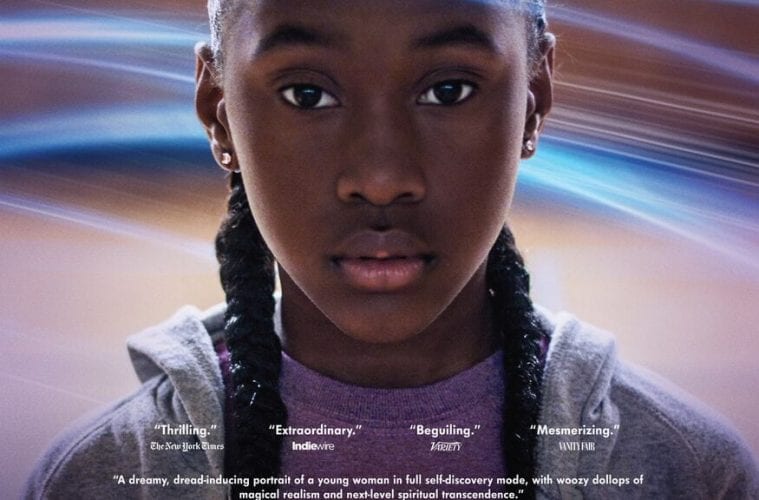 Review: “The Fits” gives a clear perspective on modern adolescence while “Art Bastard” misses the mark

In the dark, a young girl counts steadily: one, two, three. Then, on screen, her face pops into view, eyes aimed directly at us. She’s doing sit-ups.

This in-your-face introduction to 11-year-old, almond-eyed Toni (played by Royalty Hightower, in a lovely debut) creates immediate intimacy and a bond between the viewer and the character. The centrality of Toni’s vision in the movie — her gaze — is established at once.

Cincinnati’s Lincoln Recreation Center, where much of the film takes place, makes for a well-suited setting for an immersive, poetic dip into adolescence and gender rolls. Toni drifts between the borders of two habitats inside the recreation center: the teen boys in their boxing ring, finessing their punches; and the teen girls on the gym floor, practicing their competitive dance moves. Pre-adolescent Toni is pulled between these two worlds in ways she doesn’t entirely understand.

Toni is a lot skinnier and less curvy than the older girls she approaches to join their dance team, the Lionesses. Her enthusiasm for learning the dance moves is a long way away from her ability to nail them. When she’s not at rehearsals, Toni drifts through the girls’ locker room, staring at the female apparel and accessories, as if at an archaeological museum.

Then, things start happening. One by one, members of the Lionesses go stiff and fall into sudden, out-of-nowhere seizures. Is there something in the water? or hormonal hysterics? “Maybe it’s some kind of boyfriend disease?” one of the teen girls speculates. (Nice of-the-moment touch: When one of the girls goes down, we see her seizure via the videos her teammates are busy capturing on their smartphones.)

We’ll never know what’s behind these fits, because knowing isn’t the point. Working on a micro budget, first-time director Anna Rose Holmer creates really arresting moments and images that keep us more interested than any solution of this mystery/metaphor could. She contains much of the film inside the community center, using long wordless sequences, a prowling camera and overheard dialogue to memorable effect.

You could think of The Fits  as an urban variation on and descendant of Peter Weir’s Picnic at Hanging Rock and Sofia Coppola’s The Virgin Suicides (with a hint of Crucible-style mass hysteria). Here, adolescence is both contagion and transformation, a visionary as much as biological transformation. The 2014 British film The Falling, set in a posh boarding school, also built its drama around an epidemic of fainting, and The Fits, in its meditation on the power of female adolescence, even shares some kinship with the recent colonial chiller, The Witch.

Also opening this week, Art Bastard is a documentary that has elements that could have made it an invaluable piece of work but misses the mark. Its subject is the 1940-born painter Robert Cenedella, who rose up during one of the nation’s most interesting periods of 20th-century painting, when Pollock, Rothko and their comrades were making abstract expressionism synonymous with the American art scene.

Moving to New York as a youngster, Cenedella studied at the Art Students League with German satirical artist George Grosz, whose cartoonish, Weimar-era style had a big influence on the younger man. (The “bastard” element of the title comes from Cenedella’s discovery that his actual father was not the writer who shared his name, but a family friend, an English professor at Colgate University.)

You can see what attracted director Victor Kanefsky to Cenedella. The guy’s good, cranky company — the kind of fella whose stories you’d like to listen to over a couple of beers at the bars he frequents. But the movie doesn’t exactly convince us that his energetic, sometimes slapdash artwork has been unjustly overlooked. He just seems to be one of the countless strivers who just can’t get over the fact that talent, time, luck and everything else that goes into the game called “fame” didn’t land the way they hoped it would for them.

As someone who crowds his canvases with the manic bodies and contorted faces of the New Yorkers he sees around him, Cenedella has no patience for the abstract painters. He heaps even more scorn on Andy Warhol and the pop art movement that followed.

“It’s not what they show that bothers me,” he says of New York’s art galleries, “it’s what they don’t show.” Including his own work, it goes without saying.

Yes, the documentary includes interviews with Richard Armstrong, director of the Guggenheim Museum, who acknowledges the capricious nature of gallery curation. But mainly the movie is full of other white-haired male cronies of Cenedella’s, who bolster his ego. Rather than an interesting study of decades of the New York art scene, filtered through one painter, Art Bastard becomes a chronicle of Cenedella’s grievances.