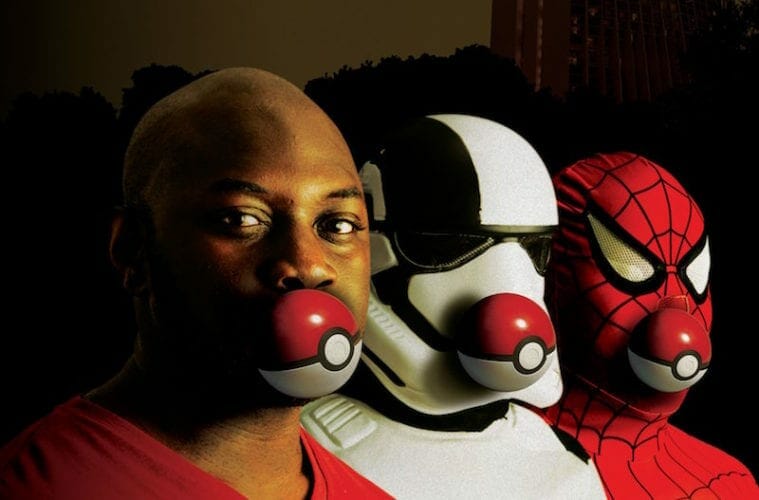 Jon Carr left his job as artistic director at Dad’s Garage’s Theatre Company in December to become executive producer of The Second City in Chicago, but not before holding multiple positions with Dad’s, including playwright. His semi-autobiographical Black Nerd — which ran for four packed weekends in 2018 — is available again, on the company’s new on-demand channel through March 31. (ArtsATL never reviewed it, so we’re taking a fresh look.)

One of Dad’s biggest hits ever and something of a departure for the company, Black Nerd is a comedy at heart but confronts some important issues. Carr cowrote Dad’s 2012’s comedy The Wrath of Con, about five friends and their weekend at Dragon Con; Black Nerd was his first show as a solo writer. A series of essays he wrote for public performance was the genesis of the piece, which centers around Marcus (Avery Sharpe here, Carr in other iterations), a Black man who prefers Dragon Con to Jay Z and Star Wars to Tyler Perry. A constant theme is Marcus’ feeling that he doesn’t fit anywhere. Marcus, breaking the fourth wall pretty frequently, talks about navigating life with his family as well as with his White friends. Nerd culture is also a topic.

Over the course of the 90-minute show, Marcus spends time with his grandmother (Andrene Ward-Hammond), a wise woman who influences his life. He has major fights with his best friend, Cosmo (Jon Wierenga), as the two discuss race relations, and cousin Cheeto (Freddy Boyd), who accuses Marcus of being a scared White guy on the inside trying to break free.

Carr won the Suzi Bass Awards’ 2018 Gene-Gabriel Moore Playwriting Award for Black Nerd, which is full of smart dialogue and observation. Talking to a friend about their Dragon Con costume options, Marcus refers to “The Big 5” — (Lando Calrissian from Star Wars, Morpheus from The Matrix, Blade, Nick Fury from The Avengers and the Old Spice guy) — the quintet of standard characters a Black person can dress as. Later, referring to himself as the “friend who makes you laugh, but you don’t worry about too much,” he mentions a certain Black actor of a popular TV sitcom that featured all sorts of romantic entanglements — except any with her.

Another scene that works is a parallel double date that Marcus has with a White woman (on one side of the table) and a Black woman on another. Tellingly, both dates end with nearly identical dialogue. Avery Sharpe, sometimes bewigged, plays the title character in the Dad’s-On-Demand streaming version of “Black Nerd.” See it through March 31.

This turf is personal for Carr. Although Back Nerd is billed as a comedy and features some patented Dad’s-style laughs, it can be a heavy piece with several near-shocking exchanges between characters. Director Tiffany Porter maximizes these and other moments, but the play seems uneven and disjointed at times and timid at others, as if Dad’s didn’t want to stray too far into serious material. An Act 2 opening scene at Dragon Con goes way too long, despite a priceless sight gag by Wierenga, and some movie spoofs don’t click either. The telling moments between characters work best.

Sharpe (an actor and the playwright behind 2018’s acclaimed Woke) is convincing as a conflicted young man trying to figure out his place in the world, while Ward-Hammond makes the grandmother one who can tell a touching story about her husband one moment and sneak a joint the next.

Dad’s has been closed to live performances for almost a year, producing its content on Twitch.tv and now Dad’s on Demand instead. Online content usually proves to be a mixed bag. Nothing replaces the real deal. Black Nerd was taped before a live audience (remember those?) and some of the dialogue is hard to hear because of seems to be crowd noise. That’s a shame because this is the kind of work that depends on its words. On the plus side, it was nice to be able hit rewind and rewatch certain moments. Dad’s digital platform was designed to showcase some of the company’s signature works as well as new, original fare.

The Black Nerd stream includes an engaging and revealing conversation between Carr and interim artistic director Tim Stoltenberg. Carr admits the piece was scary to write because he had no idea how Dad’s audiences would react and that it went through a lot of developmental steps before its premiere. He also talks about his time at the company — as the first person of color to join the performing ensemble — and tells a droll story about a peanut-butter lap dance.

Whatever kinks this show may have, Carr’s voice comes through loud and clear. He has moved on, but here’s hoping Black Nerd doesn’t disappear. It’s a thought-provoking, original work that deserves another local staging at some point, one with more trust in its best material and less insistence on reaching for laughs.