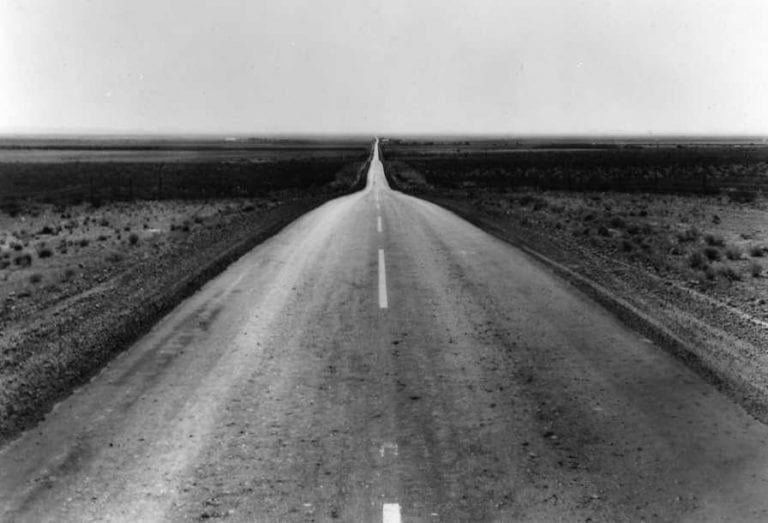 Review: “Cross Country” presents a multidimensional and vivid portrait of the United States

A mural-sized image of an open road greets visitors to the High Museum’s Cross Country: The Power of Place in American Art, 1915–1950 (up through May 7).  This blow-up of Dorothea Lange’s 1938 photo of U.S. 54 is an apt invitation to a fascinating journey through a panoramic, multidimensional portrait of the United States, one that vivifies America’s history as well as its art.

The show’s nucleus is Rural Modern: American Art Beyond the City, an exhibition of 60 paintings organized by the Brandywine River Museum of Art. Its premise is that a confluence of factors – among them, artists’ increased mobility, the allure of rural artist colonies and a prevailing nationalism reflected in the search for an American artistic identity — resulted in the spread and fertility of modern art outside of urban hubs.

The High’s exhibition is larger (200 works, 70 from the High’s collection) and broader in scope. Assembled by American art curator Stephanie Heydt in a rare cross-departmental collaboration with Katherine Jentleson, curator of folk and self-taught art, and assistant photography curator Gregory Harris, this version adds photography and beefs up the presence of self-taught art as well as the presence of women and Black practitioners. This underscores “the increasing openness to who could be an artist” during this period, says Heydt.

As the subtitle suggests, its emphasis has shifted, too, from the spread of modernism to an examination of the multiplicity of regional arts that developed as artists responded to the particularities of landscape, architecture, demographics, economy and way of life.

For example, there’s no mistaking the part of the country depicted in California artist Maynard Dixon’s Red Butte with Mountain (1932), a mural-size painting in which pharaonic red-gold outcroppings dwarf Kit Carson’s posse riding along its base. Similarly, adobe architecture, which captivated artists of all stripes, is shorthand for the Southwest. Their responses range from Emil Bisttram’s descriptive oil and watercolor Church at Ranchos II to the formalist take evident in Ansel Adams’ photo Church – Ranchos de Taos, New Mexico, both created in 1937.

Some imagery is ingrained in our cultural consciousness. Self-taught artist Anna Mary Robertson’s (a.k.a. Grandma Moses) Bringing in the Maple Sugar (1939), picturing workers scurrying through the snowy woods, is a classic New England tableau. One can imagine Robert Frost (a San Francisco native!) lurking behind a tree.

Is that Auntie Em in her Kansas farmhouse, the windmill and prairie visible through open window in The Old Folks (Mother and Father) (1929)? Like Dorothy, native son John Steuart Curry must have felt there was no place like home, even though he painted it from afar for most of his career. City-bred artists like Charles Sheeler and Stuart Davis also found sustenance in the countryside, but rather than reveling in nostalgia, they rendered local subject matter – a Pennsylvania barn, New Mexico’s high desert – in the modernist language they brought with them.

But life was not, of course, always as idyllic as some of these works suggest, and many artists forthrightly depicted America’s travails and the role economics, religion and politics played in shaping American places. Alexandre Hogue’s sermonizing painting Crucified Land (1939) refers to the practice of deep plowing, which caused too much water runoff and contributed to the conditions that led to the Dust Bowl. It’s one step from the furrows of ravaged land in his painting to those that crease the worn and worried face of Dorothea Lange’s Migrant Mother, Nipomo, California (1936).

Not surprisingly, the section on the South devotes much attention to the difficulties and suffering of African Americans. Jacob Lawrence portrays grinding poverty in Firewood #55 (1938). In Mourners (no date), Frederick Flemister depicts a lynching as a Renaissance Pietà by way of El Greco. Yet, it also notes steps forward: Hale Woodruff’s mural Opening Day at Talladega College (1942) celebrates new opportunities for Black students through the founding of Black colleges. And Flemister asserts his dignity and strength in his 1940 head-held-high self-portrait as an artist in Old Master tradition, presaging contemporary artist Kehinde Wiley’s Old-Master-style portraits of Black men.

The exhibition is a mix of iconic and surprising images, well-known and obscure artists. Sharing the same tight, close-up composition, self-taught artist Josephine Joy’s sensuous painting Aloe (1935–38) makes a sisterly pair with Imogen Cunningham’s adjacent photo of a magnolia blossom. And it spikes the preponderant representational art with outliers such as Clarence John Laughlin’s surreal photos of New Orleans and abstract photographs by the likes of Alfred Stieglitz, Wynn Bullock and Harry Callahan. (Though jarring in this context, they do remind us that there was a wholly different kind of art exploration going on at the same time.)

If the show opens one’s eyes to the fecundity of the period, it also suggests that it took more than individual artists to make it happen. It took institutional leadership: the Museum of Modern Art’s championing of photography and self-taught art or Atlanta University’s Annuals, which supported Black artists when they were locked out of the mainstream art world. It took private philanthropy: Julius Rosenwald funded African-American schools in the Jim Crow South and offered traveling fellowships for artists. It also took government support: The New Deal’s Works Progress Administration (WPA) employed artists and left a swath of art in public places of citizens across the country to enjoy. The photographers employed by the Farm Securities Administration (FSA), among them Walker Evans and Dorothea Lange, produced some of the period’s most profound art.

Like the Coca-Cola ad that aired during the Super Bowl game, Cross Country is a celebration of this country’s diversity that timing has unintentionally inflected with political nuance. If, as Heydt said, the culture was recalibrating who could be an artist, it was also trying to figure out how to make American art. The corollary, what does it mean to be American, is a question for our time. As with art, there will never be one definitive answer.