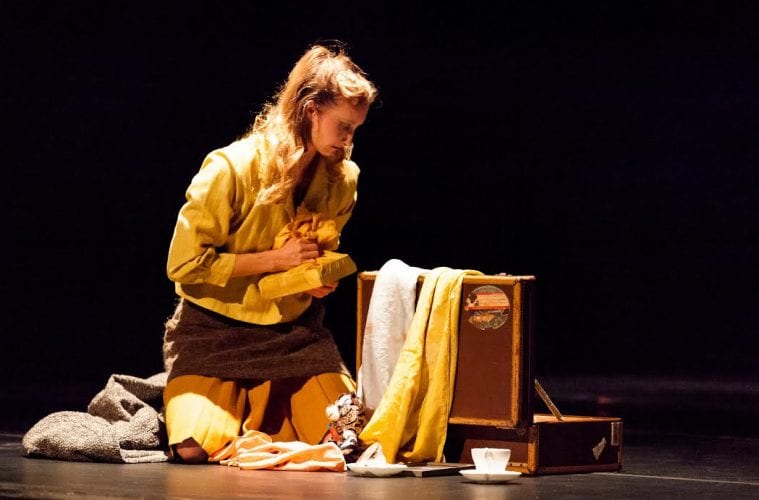 Core Dance’s Life Interrupted, created in 2015, will have its Atlanta premiere at 7 Stages from February 23 to February 26. The 50-minute dance/theater work seeks to raise awareness of the Japanese-American internment during World War II as well as draw attention to issues like post-war emigration and xenophobia. “We are not depicting the history, by choice, but instead using the history to inform the creation of the work,” says artistic director Sue Schroeder. “When doing a work like this, it is important to understand the truth in the history. It was important to find relevance in the present from the events of the past.” The development of Life Interrupted was funded in part by the U.S. Department of the Interior, Japanese-American Confinement Sites Grant Program, National Park Service, Alternate ROOTS and Goethe-Zentrum Atlanta, among other organizations.

The wartime internment affected thousands of Japanese Americans from 1942 to 1946, including future Martha Graham Dance Company legend Yuriko Kikuchi, who taught dance classes and staged a suite from The Nutcracker at the Gila River Relocation Center in Arizona where she was assigned to live.

Schroeder says that the company’s performances of Life Interrupted have particular relevance this year. “We are performing this work in February of 2017, which marks the 75th anniversary of the signing of Executive Order 9066 by President Roosevelt that put the camps into being,” she says. She likewise sees parallels between that time and current events — particularly regarding refugees. “Fear and hysteria are driving opinion and decisions,” she says. “It is uncanny how this history is resonating in the present.”

Life Interrupted portrays the conflicting emotions experienced by interned Japanese Americans, as well as the theme of overcoming challenging times through courage. The work’s use of abstract, contemporary dance allows audience members to take in the piece’s messages in individual ways. “Art has the capacity to ignite and inspire empathy, particularly for those labeled ‘the other,’” she says. “How each person experiences the igniting is unique; what and how we feel is unique.”

Schroeder, who co-founded Core Dance in 1980 with her sister Kathy Schroeder Russell, says the company has a long history of creating work that is tied to social activism and social consciousness. The idea for creating Life Interrupted followed on the heels of Core’s residency, Moving Towards Health, which raised awareness of eating disorders in Arkansas. Dr. Gayle Seymour, a professor of art history and associate dean of the College of Fine Arts and Communication at the University of Central Arkansas, brought up to Schroeder the topic of the Japanese-American internment and its connection with the state.

Schroeder immediately realized this was the subject she wanted to tackle in her next project and began researching. “I first visited the former camp sites of Rohwer and Jerome in Arkansas,” she says. “I also read anything and everything I could find and watched footage online. I hired a dramaturge and together we went into the archives at the Butler Center in Little Rock. I researched at the WWII Japanese American Internment Museum in McGehee, Arkansas. And I listened to personal stories as told to me by persons still living who had been in the camps.”

From the information she gathered, Schroeder started creating movement experiments and working with collaborators to bring the subject matter to life. “Our set designer, Scott Silvey, made objects that were found in the camps: crates, a cot and we also had traveling coats and luggage,” she says. “We researched movement images and metaphors for these. I brought in Celeste Miller to work with stories, text and anecdotes with the dance artists of Core. I also brought in Leslie Scates to work with Ensemble Thinking technique.”

The score for Life Interrupted was written by German composer Christian Meyer, who composed the music for Schroeder’s work The Point in 2010. Life Interrupted also features projections of artwork by Nancy Chikaraishi, a professor of architecture at the Hammons School of Architecture at Drury University in Springfield, Missouri. Chikaraishi has a personal connection to the Japanese-American internment: her parents had lived at the camp in Rohwer.

Schroeder hopes that Life Interrupted will stir empathy and spark conversation. “When I travel abroad, it is very common to talk ‘politics’ in social settings — not to convince someone or defend a point of view but to exchange ideas and learn from each other,” she says. “Our current circumstances have fueled this in the U.S. We plan to have conversations with the audience after each performance and hope to inspire a continuing dialogue.”