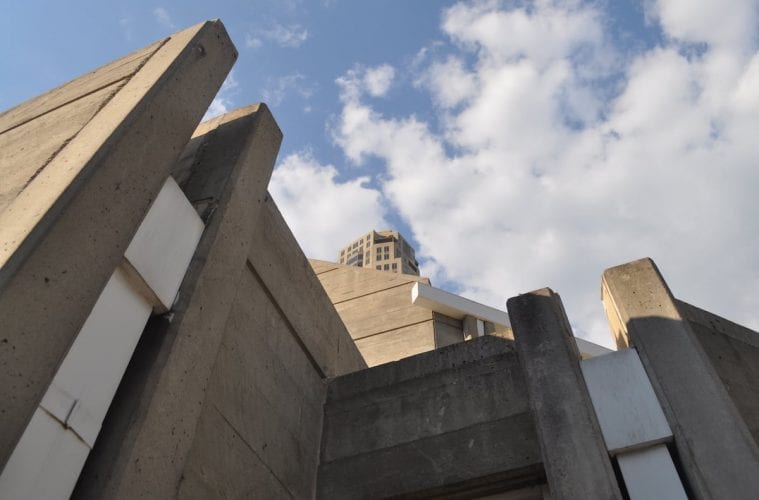 Editor’s disclosure: This article’s focus is on the Brutalist Christian Church Buckhead building, at the corner of Peachtree and Stratford, not to be confused with Buckhead Church, at 3336 Peachtree Rd.

Inspired by the near loss of Breuer’s Central Library (and real loss of countless other buildings), this new 12-part series seeks to highlight buildings Atlantans have resigned to irrelevancy without a second thought. As we look back on the losses of the Loew’s Grand Theatre, the Piedmont Hotel, the original Equitable Building, Terminal Station and several other smaller, yet no-less-important buildings, we learn that demolition of historic fabric is a loss to our city.

The immortality of churches

In many cases, ecclesiastic design trends toward classical styles, which lend a sense of history and reverence to structure, providing a tangible unity with the long-practiced rituals that take place within. Churches often serve as the center of a community, a holy embodiment that is cherished by congregants and maintained generation after generation. Atlanta is filled with many, many historic churches. While some congregations have been lost through the decades of development in the core of the city, more than two dozen houses of worship from a century or more ago survive today — a far better track record than for most other types of buildings. The older churches in the city come in many different styles, from the Gothic Revival First United Methodist to the Spanish Mission First Congregational Church.

Given all this, it seems unlikely for a church to end up on our list of overlooked architecture – after all, the buildings are usually architecturally impressive and held in high esteem by their users. But not all churches are created equal.

Modernism, viewed as a more sterile or corporate style of design, was slow to be adopted by religious institutions. However, Corbusier’s Notre Dame du Haut (1955) in Ronchamp helped break down the notion.

In Atlanta, the modern style began to be employed in the design of houses of worship that grew to serve the growing post-WWII population. In Buckhead, Ahavath Achim engaged Andre Steiner to design the congregation’s new sanctuary in 1958, and in 1967 the John Knox Presbyterian Church in Marietta opened a new sanctuary designed by Tom Venulett, then an employee at Toombs, Amisano & Wells. It would not be the only strikingly modern church the firm would produce.

A church fitting the context 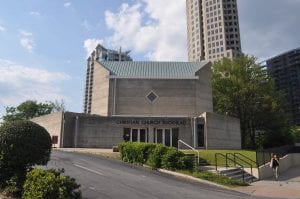 Much like today, in the 1980s Buckhead was booming. The first years of the decade saw the construction of the Ritz Carlton, Monarch Plaza, and the south tower of Atlanta Financial Center between Lenox Square and the future Georgia 400 right-of-way.

The area was in transition; commercial growth along the Peachtree corridor usurped the existing single-family residential uses, relegating homes to the neighborhoods off Peachtree Road.

In 1984, locally prominent firm Toombs, Amisano & Wells – best known for modernist projects around Atlanta including Peachtree Summit, Rich’s Crystal Bridge in downtown, and the Peachtree Center MARTA Station – was tapped to design the Second Church of Christ, Scientist on Peachtree Road near where Georgia 400 and the Buckhead MARTA Station slice underneath today. The lead designer, Joseph Amisano, FAIA, was no stranger to the area, having designed Lenox Square in 1958.

The site at the intersection of Peachtree and Stratford was, at that time, embedded among the transitioning blocks of the Peachtree corridor – a mix of turn-of-the-century mansions and mid-century office and commercial developments lent an eclectic context.

The church was designed as a small facility, more similar in scale to the surrounding classical homes than the new commercial towers. But while the size fit with the nearby mansions – including the home which fronted Dante’s Down the Hatch – the styling was anything but classical. Rather, it was referential to the forward-looking Buckhead rising around it.

The church was designed in the then-semi-popular brutalist style, echoing the Breuer library constructed downtown just a few years prior. It is one of the few buildings in Atlanta to be designed in the style. Composed of concrete, the church is simultaneously bunker-like and, oddly, welcoming. The poured-in-place concrete is finessed, with the grain of the wood formwork visible in the horizontal banding of the building.

While the material palette suggests heaviness, the building actually is about light – a popular element in religious architecture. In Amisano’s obituary for docomomo, Jon Buono and Robert Craig, PhD, characterized the church as “a poetic expression of light constructed in reinforced concrete.”

The interplay of the heavy concrete and light creates a unique atmosphere and is as much a piece of sculptural art as architecture.

Amisano was no stranger to art, and was responsible for the original design of the Woodruff Arts Center in 1968, when it was known as the Memorial Arts Center – coincidentally neighbors with the functionally similar, yet formally opposite Greek Revival First Church of Christ, Scientist.

After the church was built, the boom in Buckhead continued. Surrounding sites were swallowed up by development.

In 2006, the congregation moved from their home of just 20 years, leaving the building vacant for a time. While the church itself was used by another congregation, the reading room – contained in a highly visible separate building at the corner of Peachtree and Stratford roads — was turned into a pawn shop, leveraging the prime Peachtree Road location.

Since the church was built, Georgia 400 pushed through just to the west, and high rises sprouted around it. Now, the land is incredibly valuable – and destined to become more so, thanks to the proposal for a park above the highway, a mere stone’s throw away.

The style of brutalism is hard for many to love, and the small scale of the church, coupled with its seemingly singular usage, is its ultimate downfall on a highly valuable piece of land – one of the last remaining low-density sites in the area (save for the vast parking lots that feed the lucrative commercial spaces).

While understandable, the fate of the building is still lamentable. It is a unique jewel among the range of towers that surround it. When the church is demolished to make way for the glassy high-rise residential tower, Atlanta will lose one of its few brutalist works, and the last work by Joe Amisano.

It would be nice to see the building retained, even at the expense of Maggiano’s next door – though, alas, meatballs sell for more than God these days.