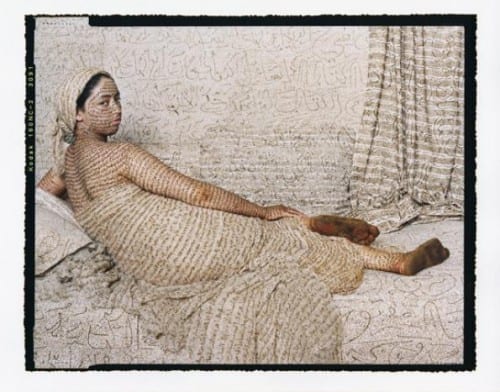 It is difficult, though certainly not impossible, to critique beauty by means of beauty — the emotional reaction so often forestalls the intellectual one.

Moroccan-born photographer Lalla Essaydi, whose work is on exhibit through January 21 at Jackson Fine Art, has undertaken the even more challenging task of critiquing the misused traditions and aesthetics of two cultures at once. Her stunning studies of women with lines of Arabic calligraphy both surrounding them and inscribed on their clothing and bodies have, more recently, been succeeded by images of lushly patterned interiors in which odalisques merge with their environment through the patterns of their clothing, which match the architecture.

Although Essaydi’s best-known photograph quotes the form of “La Grande Odalisque,” a relatively famous painting by Ingres, it may still be necessary to remind viewers that the 19th-century Orientalist painters of Europe and America went to the Muslim world in quest of all the things that were lacking in their own societies: vivid colors, sensitive patterns and (so they thought) unrestrained sensuality. One of their standard imaginary subjects was the private life of the women sequestered in the harem.

The exotic (to them) beauty to which these artists were responding had grown out of prohibitions in much of the Muslim world against pictorial representation. Morocco is one of the countries in which these restraints led to the expression of aesthetic form through rigorous but highly imaginative geometric patterns (based on mathematical principles that have only recently been explicitly analyzed), and through calligraphy based on the intrinsic fluidity of the letters of the Arabic alphabet.

In her “Les Femmes du Maroc” photographs, represented in this exhibition by examples from 2008, Essaydi assaults both European exoticism and Moroccan denigration of traditionally female crafts. The inscriptions on the clothes and bodies of her languidly posed women belie the fantasies of the Orientalists: according to Essaydi’s celebrated catalogue essayist, the sociologist Fatema Mernissi, the text contains such sentiments as “The more my knowledge increases, the more I become convinced submissiveness is impossible” and “I cannot prevent experiencing shame when I feel spiritually denuded.”

The difficulty for most American viewers is that the text is, of course, all in Arabic. We must take the pointedly self-revealing quality of the content on faith.

Even more, American viewers are likely to miss the significance of writing on the body in henna. Henna patterns are still considered an insignificant female craft, while calligraphy is a traditional fine art — an art that was historically open to women, though the lack of surviving examples from the female calligraphers once lauded by their contemporaries may be significant.

Women in restricted environments, such as the palace harems that excited the imaginations of the Orientalists, sometimes used calligraphy as a gentle form of subversion, writing poems on their clothes. (At least they did this, as Mernissi tells us, in the Abbasid Caliphate, a thousand or so years ago.)

We are also told by Mernissi that Essaydi’s use of the form is deeply unsettling to contemporary Moroccan men, but we (or I, anyway) can only guess at what rules of behavior are being transgressed, beyond the one that you simply don’t make pictures in which text is the main feature and spills over from the walls onto the people. In general, Essaydi’s flouting of social norms seems less fraught than Shirin Neshat’s projection of verses onto the bodies of women a decade ago — but this may be only because, thanks to Rumi and other Persian poets, the role of text in Iranian culture is much more familiar to Americans than is the place of writing in Morocco.

Essaydi’s “Harem” photographs of 2009 communicate the potent notion that the traditions that thrilled the Orientalists tend to make women part of the furniture — or part of the rigid architecture of social assumptions that Mernissi, most notably, is trying to refashion from within. As with the realization of why Mernissi was a logical choice as Essaydi’s “Les Femmes du Maroc” essayist, secondary literature may be necessary to comprehend fully what is at stake in the placement of women in Orientalist-painting poses amid the extraordinary geometry of a palace in Essaydi’s home town of Marrakesh. We might assume on first viewing, for example, that the designs in these traditional-looking clothes are off-the-rack items from global fashion, not special-ordered by Essaydi to match the tiles on which the women recline. It isn’t so; Essaydi created the fabric herself, to startling effect. But it could have been.

The jewelry made from spent machine-gun shells that is worn by the woman in this exhibition’s lone example of Essaydi’s “Bullets” series also raises the question for the viewer of who made the jewelry and why. The emotional impact of the photograph is immediate, but on another level, it matters tremendously whether this is Essaydi’s work or something akin to the famous, conceptually contested Afghan war rugs. Like the fabrics in “Harem,” these are Essaydi originals, but comparable creative gestures can be found throughout the world’s war zones, or even just the world’s gun cultures.

Essaydi’s whole project raises issues that may be beyond the ones she intends. Using beauty to critique Moroccan social canons and the aesthetic canons of European Orientalism, she attracts the viewer’s eye more than enough to lead some to engage in the study that eventually makes her project intelligible to those who know little about her context. Less visually compelling pieces might not seem worth the work.

Objects and customs much closer to home may seem as opaque to many viewers as the local practices of Marrakesh. The “Paper-Cut-Project / Greg Lotus / Ed Pfizenmaier” exhibition in Jackson Fine Art’s back gallery is a window into a world of fashion that rests on cultural assumptions as alien to most Americans as the cultural codes of Morocco.

Atlanta-based artists Amy Flurry and Nikki Salk of Paper-Cut-Project have been creating a stir in the global fashion world with their paper wig sculptures, which can be exhibited on pedestals, as they are in this exhibition, or worn as actual wigs by models, as they are in Greg Lotus’ photographs. Paper-Cut’s 2010 debut installation in the Atlanta and New York locations of Jeffrey boutique led Hermès to commission a 30-piece collection of masks for boutique openings in Europe and Asia. Commissions from Cartier and Kate Spade followed.

The downright florid exoticism of this aesthetic is inspired by the further edges of the fashion of an earlier time, to which Jackson Fine Art pays homage by juxtaposing the wigs and Lotus’ portraiture with Ed Pfizenmaier’s photographs of fashion in the 1960s. Dalí, Warhol and Pop Art appear in startlingly imaginative configurations, alongside various visual trends that were apparent only to those who were perusing fashion magazines or frequenting Saks fifth Avenue.

In the context established by these adjacent exhibitions, the most telling photograph is Pfizenmaier’s 1965 image of “Margaret Ramay & Karen Graham,” in which the two women, who pose in complementary languid stances, are clad in flowing, luxuriously patterned robes that blend busily into the contrasting patterning of the exotic textiles that cover every inch of the wall and floor around them. Here there can be no ambiguity as to the message directed to mid-‘60s viewers: whether it comes from India or from the world of William Morris, this flagrantly non-modern stuff is seriously cool, and it is super-cool to put it on your body.

Ingres might very well have approved. Essaydi, who now divides her time between Morocco and the United States, where Alexander McQueen’s museum retrospective attracted crowds usually reserved for Impressionism and the gold of the Pharaohs, may have other opinions. It would be interesting to know what they are.

Regardless of that intriguing question, Jackson Fine Art owner Anna Walker Skillman’s intelligent juxtapositions have made it possible for us to begin to think about questions of global fashion, the perennial lure of the exotic, and the concealed cultural codes that are oppressive or liberating depending on how well you understand them and what you choose to do with them.