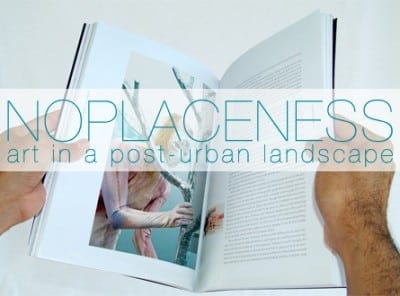 “Noplaceness: Art in a Post-Urban Landscape”

For some time, large metropolitan art hubs such as New York, London and Berlin have grappled with the magnitude and diversity of the work within their borders. Art scenes are often broken down into specific parts of a city, creating a sense of manageability while imbuing the artists and their work with a specific flavor or brand. Collectively, these artists take on an identity, real or imagined, that colors the perception of their work.

Now, in the book “Noplaceness: Art in a Post-Urban Landscape,” Atlanta Art Now‘s first publication, Atlanta is presented as a place where this type of identity is being questioned in the light of increasing globalization. Is there something we can pinpoint as “contemporary Atlanta art,” or is the idea of a location-specific art scene passé?

As the identifying markers of regional art slip away, so too does our concept of place in the traditional sense. Artists may identify with any movement they encounter online; regional influences often take a back seat. No longer do the usual tropes of the Southern landscape, rural or urban, and its residents and attributes hold ultimate sway for artists based in the American South. Post-urbanization, the city of Atlanta and its environs hold a vast array of wildly divergent art forms. Cross-pollination and hybridity often result. Imagine a first-generation Korean-American artist who studied in Germany, finds inspiration in Japanese anime, lives in Cabbagetown during the winter, summers in New York and shows her work only in Los Angeles.

Atlanta, a modern city defined by its lack of a city center and its extensive urban sprawl, has made room for all comers, with a vibrant influx of foreigners adding to the tapestry of city life. Its lack of cohesion in the formal urban sense may have helped foster distinct pockets of artistic activity, while at the same time, as technology and global communication expand our frames of reference, concepts of the self and identity are less and less about a narrow range of site-specific cultural experiences. “Noplaceness” examines this perceived spatial order and, in the process, furthers the dialogue about contemporary art, diversity and the shifting meanings of self and community.

Through its focus on more than 30 artists, subcategorized by five thematic chapters, the book insightfully explores the evolution of the perception of place and identity. Of these chapters, “We Are Not Danes in Denmark: Displacement and the Liquid Self in Atlanta Art” and “The In-Between: Identity and Global Anxiety” may offer the most insights into the juxtaposition of a modern sense of displacement and our inherited cultural signifiers. If through travel and communication we experience the world everywhere and nowhere at once, perhaps this new “placelessness” is liberating. At the very least, it challenges preconceived notions of nationality, home and self.

A fluid, decentralized perception of identity may seem, in the negative sense, to foster homogenization, but seen within the scope of existing possibilities for inspiration, it produces a limitless palette of options — freedom to invent oneself and one’s art, using any available truths and/or fictions. As stated by one of the three authors, Cinqué Hicks: “As the millennium streams forward, the flows that dictate our economic and social realities will continue to overlay the physical spaces that once delimited the city…. The reality of place today is but the simultaneous living out of a web of interconnected fictions.”

Hicks and his co-authors, fellow art critics Jerry Cullum and Catherine Fox (who, in the interest of full disclosure, is ArtsCriticATL.com’s executive director), provide an insightful look at the chosen artists, giving the reader an essential primer on these major local players, their sources of inspiration and their context within the Atlanta arts continuum. Moreover, “Noplaceness” seeks to broaden and deepen the international critical dialogue about concepts of art and place. Translations of chapters into Portuguese and Chinese, as the introduction states, are meant to “spark that communication between Atlanta and other parts of the world.”

The artwork reproduced here offers a sampling of the artistic diversity in metro Atlanta. Painting, photography, fiber arts and assemblage are but some of the chosen media, and all have a forward-leaning edge. The underlying current of urban fragmentation and its attendant constraints and possibilities provides an ersatz cultural net, but it leaves plenty of space for negotiation. Many of the works shown are fraught with tension, as tradition, technology and the individual collide, creating a new position from which to imagine the future, eulogize the past or simply exist in the present. Standouts include the photography of Hye Yeon Nam and Jody Fausett, the drawings of Benjamin Jones, and the paintings of Fahamu Pecou and Athens artist Scott Belville, all of which invite the viewer to ruminate on the idea of place as it pertains to cultural identity.

As Atlanta continues to jockey for position in the contemporary art scene, “Noplaceness” should be considered essential reading. The flow of global information inevitably adds to the breadth of art criticism, and Atlanta still requires the voices of its artists, art writers and critics to lead the way in the creation of a thoughtful trajectory. The city’s role in the international conversation gets strong backing with “Noplaceness,” even as it questions the true meaning of artistic common ground.

For more information on “Noplaceness,” or to purchase, visit the Atlanta Art Now website.

Christina Cotter is the managing editor and arts editor for the alternative weekly newspaper Flagpole in Athens. She holds a BA in history and an MA in journalism from the University of Georgia.