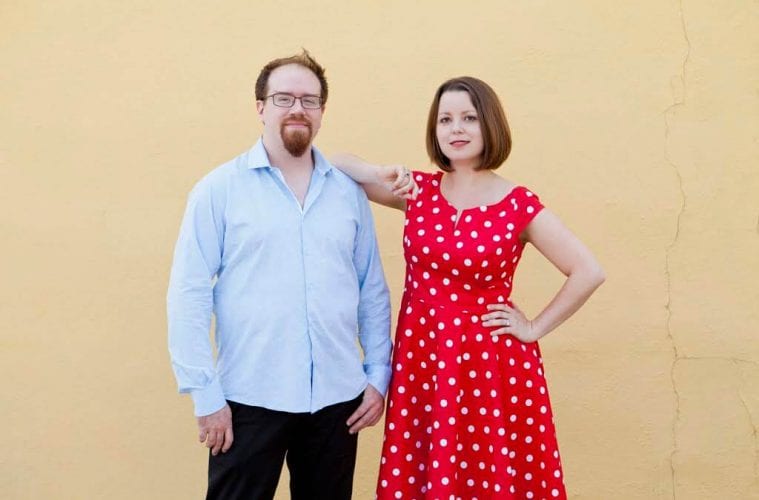 Contemporary music ensemble Chamber Cartel presented the fourth installment of its “Beyond the Zero” series Saturday evening at Orpheus Brewing Company off Monroe Drive. Rather than a chamber ensemble, this particular concert was a duo performance between Boston-based soprano Margot Rood and percussionist Caleb Herron, Chamber Cartel’s artistic director.

It was a program of mostly unfamiliar works that were written within the last two years and have received little exposure, with the exception of the final work on the program, by Tan Dun, which was written less than 30 years ago and still remains as fresh as it was then.

The concert opened with a percussion solo, “Meditation on Italo Calvino’s Castle of Crossed Destinies,” written for Herron by his good friend Anthony Donofrio. The work was inspired by the 1973 novel The Castle of Crossed Destinies by Italian author Italo Calvino, which describes meeting of travelers who find themselves unable to speak after passing through a forest, and tell their respective stories by means of Tarot cards.

In an email, Herron wrote, “When I perform this piece I usually put it first on the program so the listeners then may tune their ears to the sounds they are hearing and leave their busy hectic lives at the door.” That sense of calming was evident in the gentle palette of sounds from pitched gongs, vibraphone and other instruments played by a single performer. Rood’s voice was a good blend with Herron’s percussion.

“Amplification” was originally written by Griffin Candey for two singers, Rood and mezzo-soprano Emily Marvosh, for the Michigan Recital Project — which Rood spearheaded. Rood and Herron adapted the piece for soprano and vibraphone. It introduced the audience to Rood’s clear soprano voice and delivery of lyrics, well suited to the pragmatic vocal finesse found in Candey’s composition.

Another work by Donofrio, “Canto II,” incorporates text from Dante’s Inferno, the opening nine lines of Canto II — which describes the narrator’s preparation for his journey with Virgil through the underworld — appealing to the Muses for strength and the memory to set his experiences down in writing. In contrast to the other Donofrio work that opened the program, “Canto II” offered up a wide range of strong emotion, drama and dynamics. (Also wryly appropriate that a work about preparing to enter the underworld was performed at a brewing company named Orpheus.)

The second half opened with the three-song cycle “Finer Points” by Heather Gilligan. Written in 2016 for Rood and Herron, they recorded it on the CD Living in Light — a joint project that featured Rood’s singing and Gilligan’s compositions and was released earlier this year on Albany Records. The work’s three movements are settings of poetry by Lisa DeSiro and employ a wide range of pitched and unpitched percussion.

The first song, “Resilience,” speaks of persistence and optimism when recovering from misfortune. “Indolence” muses upon personal inertia and how sloth differs from repose. The final movement, “Perseverance,” is about how a sense of purpose is incentive to overcome obstacles in life. “Finer Points” made for a fine introduction to Gilligan’s extensive vocal writing, which fills the Living in Light CD.

The concert concluded with the only work with an established history, “Silk Road” by esteemed Chinese experimental composer Tan Dun, best known for his film score to Crouching Tiger, Hidden Dragon. The text is by Chinese-American poet Arthur Sze. Written in 1989 and premiered by singer-soundartist Joan La Barbara and percussionist Christopher Shultis, “Silk Road” was commissioned by the Santa Fe Center for Contemporary Art as a section of a collaborative performance work with Sze.

The rhythms of English language are melded with tonal qualities of Beijing opera — one of the cultural treasures of China. The composer also describes the work as being “in a linear structure like the connected brush-strokes of calligraphy.” The mannered delivery and abrupt cadences of the style seem to suit Sze’s whimsical text well, and Tan’s writing for percussion is exceptionally skilled and subtle.

Chamber Cartel’s next concert in its “Beyond the Zero” series will take place on September 23, featuring a reprise performance of Iannis Xenakis’ monumental percussion sextet, “Pléïades,” which the group last performed in 2015.