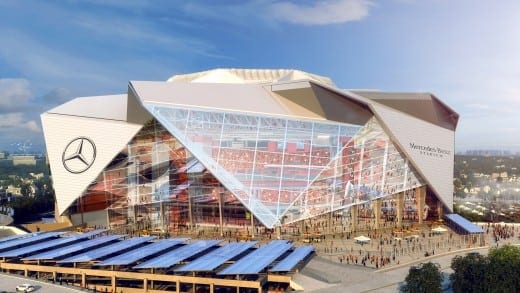 The Mercedes-Benz stadium’s art collection aims to be sophisticated, accessible and inclusive

When Mercedes-Benz Stadium gave Savannah College of Art and Design the commission to develop the art program for the future home of the Atlanta Falcons and Atlanta United, its mandate was to assemble a group of sophisticated but accessible works that would contribute to the excitement of the game-day experience. More subtle throughout the collection, perhaps, but just as important in guiding selections was a spirit of inclusiveness. Angela Blank, Arthur Blank and artist Radcliffe Bailey in discussion during the media preview of the stadium (on right).

“We wanted the art to reflect our fans’ diverse interests and the diversity of the arts,” said team owner Arthur Blank at the start of a sneak-peek tour of a half-dozen pieces last week.

When the stadium opens for its first football game on August 26, the diversity of genres, mediums and content represented in the 180 works created for the stadium will be evident, immediately and dramatically.

Approaching the entrance, game-goers’ first sight will be of a 41-foot-tall steel falcon, great wings spread, in the act of pouncing on a huge football. Immediately following Hungarian artist Gábor Miklós Szőke’s untitled representational sculpture, just inside the entrance, they will find these words written in large script, each letter a lightbox filled with dense pattern and color:

If I am not for myself, who will be for me? And if I am only for myself, then what am I? And if not now, when? Titled Executive Function (After Hillel), Michael Porten’s rendition of the words of the Jewish sage represents a seriousness one doesn’t associate with sports venues, and that was intentional. “We wanted to create surprises for the fans,” said Penny McPhee, president of The Arthur M. Blank Family Foundation, “pieces that were not something [one] would expect to see at a stadium.”

Who would have thought that fans with their minds on goals and touchdowns might be in the mood for moral profundity? It turns out that you have to ask them. SCAD and the teams surveyed potential stadium users, concert-goers as well as sports fans, querying the kind of art they wanted to see. Turns out they liked the kind of bright colors and iconic images found in Melody Postma’s mural — a graffiti-style composition embedded with historic football photos — but they also favored inspirational messages.

Said tour leader John Paul Rowan, SCAD vice president for Strategy and Innovation, “They responded to work that would be meaningful to them.”

And in a karmic coincidence for the lucky Porten, one of 20 SCAD alumni represented in the collection, Hillel’s oft-quoted remark is extremely meaningful to Blank, who told us he had carried it written on a piece of paper in his wallet for many years.

The stadium’s advisory committee wanted art that was site-specific, metaphorically as well as physically. That started with the roster. Of the 54 artists in the collection, 45% are from Georgia. For example, those who are familiar with Atlanta’s art scene or have seen his painting in Atlanta’s airport will recognize Radcliffe Bailey’s signature blend of symbolic abstraction and old photos in his 84-foot-long painting, Conduits of Contact. And what could be more “local” than “Falconstruction,” a photographic series capturing the construction of the stadium by SCAD professor Hsu-Jen Huang?

In a more literal take, Nari Ward’s We are One required community participation. For this piece, the New York-based artist collected masses of shoestrings from local professional and high school sports teams, fans and whoever wanted to contribute. He used them to create a colorful wall banner of sorts. In the center, the shoelaces spell out the title, which is not only evocative of teamwork on the field and the camaraderie fans enjoy in rooting for their team, but also, if you choose to think about it amid the game-day hubbub, of Hillel’s allusion to civic responsibility and even the aspirational motto on the coins you will drop at the food stands, E Pluribus Unum.