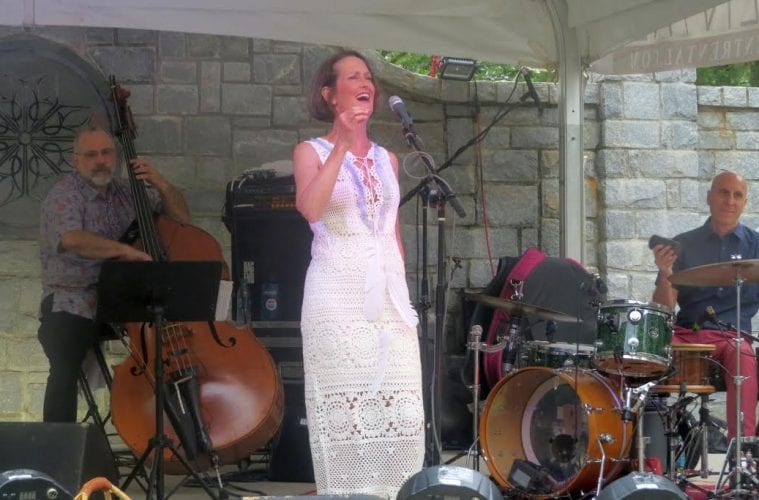 Atlanta-based jazz and improv vocalist Virginia Schenck returned for her second appearance in the “Jazz on the Lawn” series in the outdoor amphitheater at Callanwolde Fine Arts Center Friday evening, this time with world music trio Free Planet Radio from Asheville. Although she performed in the series last year with her own band, she has also performed with Free Planet Radio since 2015, and decided to mix it up a little for this year’s appearance.

Inspired and influenced by the likes of Billie Holiday, Bobby McFerrin (with whom she studied vocal improv) and Abbey Lincoln, Schenck was born in Florida, studied at Florida State University and moved to Georgia, first as a music therapist in Macon and subsequently to Atlanta where she taught at the Paideia School and jammed in jazz sessions at clubs like Twain’s in Decatur. After her divorce in 2009, she began to pursue in earnest her musical dreams as a jazz vocalist, as outlined in a 2012 interview with ArtsATL writer Brenda Stepp. She’s gone full-throttle pro and has since recorded three albums. The most recent, Aminata Moseka, was released in March and is a tribute to the late American jazz vocalist, songwriter and actress Abbey Lincoln.

Lincoln’s music was a significant part of Friday’s playlist, and the show opened with two Lincoln numbers: “Music is the Magic” and “Throw it Away.” Another Lincoln song, “Afro Blue,” closed the first set, with “Wholly Earth” popping up in the middle of the second.

Still, it was not an all-Lincoln night, with a good mix to the playlist. George Gray got the attribution from the stage for the third number, “Sack Full of Dreams,” though it seems an internet search brings up pianist Onaje Allan Gumbs first, for whom Gray played drums on the Gumbs album of that same name. Notable also is Bobby McFerrin’s “Say Ladeo,” which Schenck recorded on her Interior Motions album.

The McFerrin influence on Schenck cannot be downplayed or overestimated. While jazz improv is most commonly associated with “scat,” in the manner of Ella Fitzgerald, it was McFerrin who taught Schenck that vocal improv had much wider horizons, a matter of “what comes off the lips today.”

That approach showed in much of Schenck’s own fairly vocal improv. She performed a couple of original Latin jazz-styled songs — “Va Va” being one exemplar. She also brought forth an interesting, metrically mixed setting of a sacred hymn, “Of the Father’s Love Begotten,” and another song with similarly compassionate sentiment, its lyrics urging that “The greatest gift we can ever give [or learn] is to love and be loved.” In the same league was a unique version of the American folk hymn “Poor Wayfaring Stranger” that featured busy jazz undercurrents with Schenck’s slow, doleful vocal lines of longing and hope. 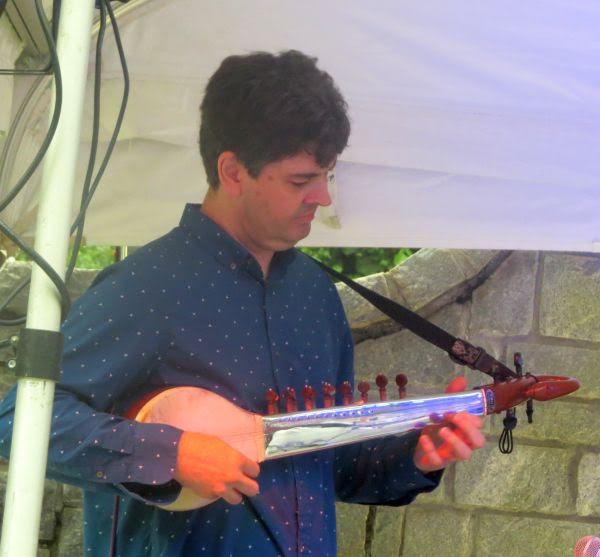 Free Planet Radio (two-time Grammy-winning bassist Eliot Wadopian, drummer/percussionist River Guerguerian and multi-instrumentalist Chris Rosser) underscored a lot of the songs with a more traditional jazz trio configuration, but also brought their world-music timbres into the mix to spice things up. That included a couple of purely instrumental numbers. Most interesting among the instruments was the sound of Rosser’s dotār — a central and south Asian folk instrument whose Persian name (دو تار) literally means “two string.”

Although the original folk dotār had indeed only two strings, and many still do, the 17-stringed Indian dotār played by Rosser is one of a number of cultural evolutions of the instrument, closely akin to the Afghani 14-string dotār but in many ways like a small sarode, with four main strings, a pair of chikari (drone) strings and 11 sympathetic strings that are not played directly but resonate with the other strings.

Guerguerian’s trap set was enhanced by an array of more culturally exotic percussion, such as the Middle Eastern dumbek. Combined with Rosser’s small multi-instrumental arsenal and Wadopian’s lithe ability to swap between creating a solid ground floor for the music and flights of melodic fancy, they excelled not only when playing their own often metrically complex numbers but while underscoring Schenck’s exploratory improv as well as her more straight-forward jazzy vocals.