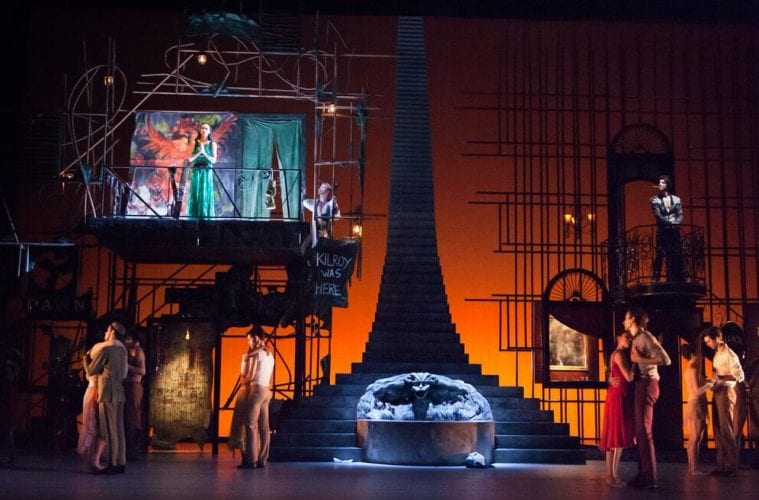 Last weekend, Helen Pickett’s ballet based on Tennessee William’s Camino Real offered the audience a vehicle to share a range of emotions, as Atlanta Ballet ushered out the 22-year era of former artistic director John McFall.

Camino epitomizes the McFall era it so appropriately closes. An American ballet with speaking parts — common in contemporary dance worlds — is a rare bird in today’s ballet world. It is an authentic expression of its collaborators, including dancers, and a brilliant reflection of McFall’s belief in the kind of creative risk-taking necessary to advance today’s ballet repertoire into the future.

In Williams’ surreal play, the Camino Real is a transitional place, a dead-end town, a tropical port city (much like Williams’ beloved New Orleans) where transportation is sporadic and people find themselves gradually stripped of pride, beauty and the spark of wildness that accompanies youth. Its hero, Kilroy, confronts his mortality among a strange mix of characters, ultimately trading his heart on the street for gifts to his true love. It seemed no coincidence that during last weekend’s production, company members gave their hearts to Atlanta, without reserve. There has been an air of uncertainty for many Atlanta Ballet dancers this season, especially those grappling with the change of directorial style the company is undergoing. It was a time for each dance artist to define their goals and ideals, and assess whether or not they align with the company’s new direction. At the close of the season, decisions had been made. Nearly half the dancers will depart — some voluntarily, others not hired back. Next year, Atlanta Ballet will look very different.

It was also a “last hurrah” for Pickett, ending a seven-year relationship with Atlanta Ballet that has yielded three world premieres. Trust between Pickett and dancers helped engender Camino Real, Pickett’s first full-length work (which Atlanta Ballet originally premiered in 2015) and her favorite. The production may need a few small adjustments before its next incarnation. Nonetheless, Camino shows that Pickett is one of the most agile and astute choreographers working in today’s ballet world.

In one electric encounter after another, relationships propelled action. Layered with Emma Kingsbury’s transparent and Gothic set, David Finn’s expressionistic lighting and Sandra Woodall’s stunning jewel and neutral-toned costumes, the effect was transfixing.

Dancers, with about 10 months’ rigorous training under their belts that included intensive acting coaching, and deep personal commitments to the work, evoked pitch perfect connections with each other and the audience.

Tara Lee, the senior company member who has danced principal roles since she joined Atlanta Ballet at age 19, gave her final performance Friday and Saturday evenings, capping 21 seasons with Atlanta Ballet. Esmeralda is one of her most complex characters. Taken from Victor Hugo’s The Hunchback of Notre Dame, Esmeralda is a gypsy girl whose dominating mother keeps her chained to her balcony — prostitution is implied — and her virginity is ritually restored at each new moon. A young beauty, and an old soul, it was a fittingly poetic final role for Lee, whose every move told a story. Captive on her balcony, like a caged bird, her arms crossed in front of her, then opened as her skirt billowed around her like wings. Figure-eight gestures twisted her body into swirling hourglass forms that stretched into taut arabesques. When these moves blended with the open-hearted strength of Kilroy, her love interest, the results were indescribably beautiful.

In a striking opening moment, Nadia Mara — as Marguerite Gautier, fading courtesan from Alexandre Dumas’ Lady of the Camellias — hovered weightlessly above her lover’s head, her limbs reaching to their farthest extent in four directions, as if yearning for escape. Floating, yet completely in his control, it was a poetic entry into their complex relationship.

In Mara’s most heartrending performance to date, she desperately tried to board a plane out of that place. Frantic, she searched for her papers. Unable to board, she ran, frenzied, as the plane’s red taillights left her behind, collapsing behind the metal barricade, then hopelessly sinking into her lover’s embrace. Christian Clark and Nadia Mara as Casanova and Marguerite.

Christian Clark completed his 15-year tenure as a member of Atlanta Ballet as Jacques Casanova, the graceful yet possessive consort to Marguerite. This past year, Clark’s performances have shown a newfound artistic maturity. In this character, he finished his final season with a strong sense of clarity, freedom and vulnerability.

Jacob Bush’s Gutman, the iron-fisted hotelier, dominated the town like a corrupt, backwater Southern sheriff who runs his county like a fiefdom. Physicalized in Bush’s double-fisted, take-no-prisoners turns, the Southern persona seemed at odds with his toreador-style costume, slick pirouettes and cabrioles done with vaudevillian showmanship. But it was a forceful portrayal nonetheless. At moments, Bush showed vulnerability, even a glimmer of light, in the darkest of characters.

The man of the hour, appearing in golden light, was Kilroy, light heavyweight boxing champion, played by Heath Gill in his final performance with Atlanta Ballet after seven seasons. This time around, Gill brought more depth to his character, with more vigor and vitality to his triumphant entrance into the theater house. He burst onto the scene like a boxer heading into the ring, punches and jabs punctuating sailing leaps and barrel turns as a kettle drum pounded out his bold but fragile heartbeat. As the Camino’s desperate residents waltzed with roiling insistence, Kilroy seemed at times a sailor from Jerome Robbins’ Fancy Free who’d lost his way. Kilroy’s struggles with love, death and humanity’s dark forces are at the heart of Williams’ story.

Camino Real’s strong theatrical bent may not appeal to every person in the crowd. But it stands as one of Atlanta Ballet’s most significant contributions to today’s ballet repertoire. Future productions will determine its place in the ballet canon. For the moment, like its protagonist Kilroy, Camino Real is a heroic contender.