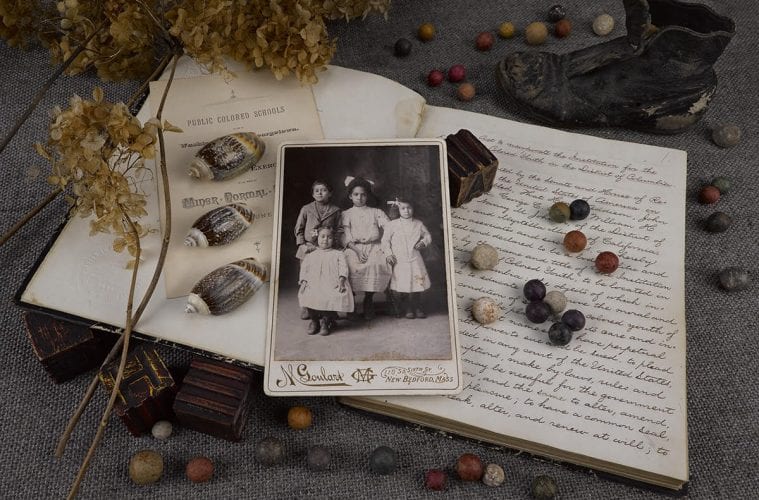 Filling the gaps in the narrative: a conversation with curator Pellom McDaniels III

As curator of the African American Collections at Emory University’s Stuart A. Rose Manuscript, Archives, & Rare Book Library (MARBL), Pellom McDaniels sits at the nexus of a resource where students, academics and the broader community can expand their knowledge of American history, as told by those who lived it. 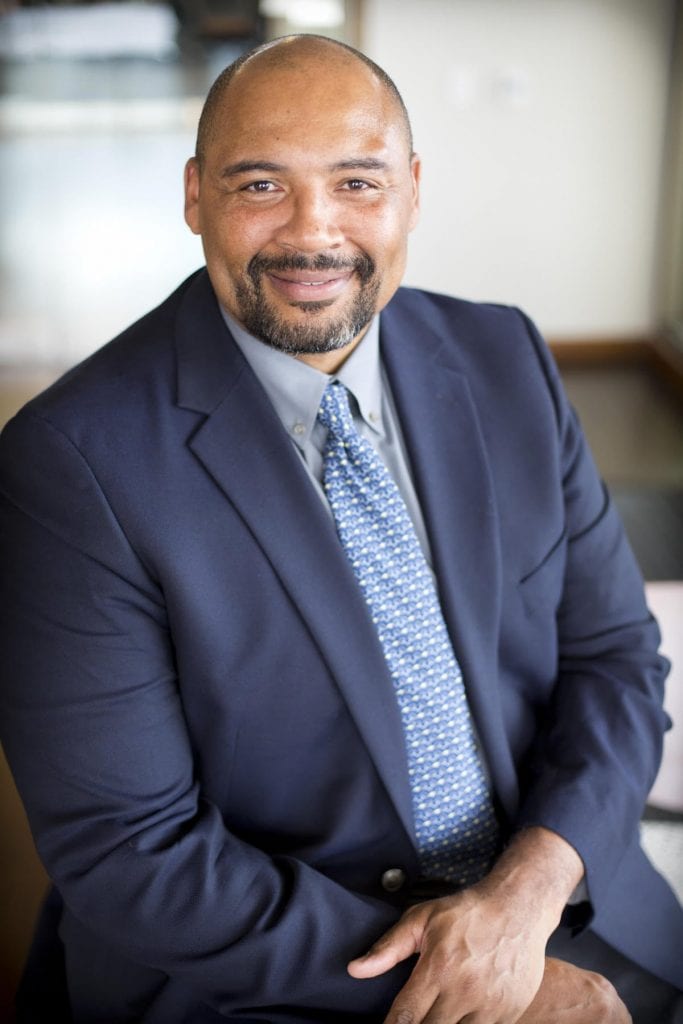 “This has been my life for the past 15 years,” says McDaniels, a former professional athlete who earned his master’s and PhD degrees from Emory after retiring from the NFL in 2000. “My research began with trying to understand the impact of Black athletes on 20th-century America . . . where African-American men’s and boy’s bodies were used as machines. There is a gap in the narrative [linking the state-sanctioned exploitation of enslaved people for profit with the history of professional sports in the United States], and I want to help make those connections.”

Understanding the nuance and context of how history unfolded is at the core of McDaniels’ mission. He uses archival materials — published texts, personal letters, photographs or other artifacts — to expose the lies told about disenfranchised people and reveal what he calls their “noble narratives.”

“People are uncomfortable talking about the vestiges of slavery,” he says. “For African Americans in particular, there is shame around how Black folks were abused. But the dishonor [of that era] is not ours to bear. Instead, we should take pride in the tradition of resilience and resistance the ancestors demonstrated.”

A major through-line in McDaniels’ scholarship has been his desire to move beyond the “show and tell” aspects of sharing archival materials, in favor of bringing bygone stories to life, making them relevant today and, most critically, showing people in their full humanity.

McDaniels is well-known beyond the halls of academia for his work as an author and curator of installations that have traveled internationally. His definitive biography of Isaac Burns Murphy (1861–1896), The Prince of Jockeys: The Life of Isaac Burns Murphy (University Press of Kentucky, 552 pp), tells the story of the first jockey to win three consecutive Kentucky Derbys, whose career was subsequently derailed when African-American jockeys were forced off the Thoroughbred racetracks. Still considered one of the finest riders of all time, Murphy died in obscurity.

The symposium McDaniels organized, titled Edwin A. Harleston Symposium: An Artist and Activist for the Ages, will be presented at MARBL on Saturday (May 20 10:00 a.m.–3:00 p.m., free and open to the public) to explore the work of Edwin Augustus Harleston (1882–1931), an artist and civil rights leader whose significance, vis-à-vis an emerging black awareness during the interwar years, has been largely overlooked.

When McDaniels curated an exhibition to commemorate the sesquicentennial of the Civil War, What Must Be Remembered: An Exhibition Inspired by Natasha Trethewey’s book, “Native Guard,” the show earned him a Primary Source Award for Research by the Center for Research Libraries (CRL) earlier this month.

Based on Trethewey’s Pulitzer Prize-winning collection of poems, Native Guard — which juxtaposed personal memory and the history of Black soldiers during the Civil War — the multimedia installation debuted at Emory’s Schwartz Center for Performing Arts in 2014. An encore exhibition at the Alliance Theatre — in conjunction with a stage adaptation of Native Guard on the Hertz Stage — followed seven months later, as did PowerPoint presentations at the University of Kentucky in Lexington in 2016, and in Johannesburg, South Africa, later that year.

What Must Be Remembered was named in homage to an 1871 quote by Frederick Douglass, who wondered, “If this war is to be forgotten, I ask in the name of all things sacred what shall men remember?”

“What must be remembered,” says McDaniels, “is who came out of this cauldron called slavery. What must be remembered is that these are people. People who have aspirations. People who come from somewhere and somebody. People who fight, die, love and care. Fathers and mothers, sons and daughters, and uncles and aunts. They are not just vernacular images in an archive or orphaned works. There is a depth to them that we can know if we look into their eyes.”

The five-piece exhibition culled from the Rose Library’s archive of 250,000 rare books and over 15,000 linear feet of manuscript material, reflect McDaniels’ disciplined eye as an editor and his less-is-more approach to curating. The story covers a period from 1863 to the close of the 19th century, and is told through three tintypes, a stereograph and a cabinet card (a Victorian style of portraiture in which a thin photograph is mounted on a card measuring 4” x 6” roughly) embellished with natural and man-made elements to humanize the subjects depicted.

Paige Knight, Emory’s digital photography coordinator who collaborated on the project, composed and photographed the archival materials, and was determined to highlight the dignity and grace of her subjects. 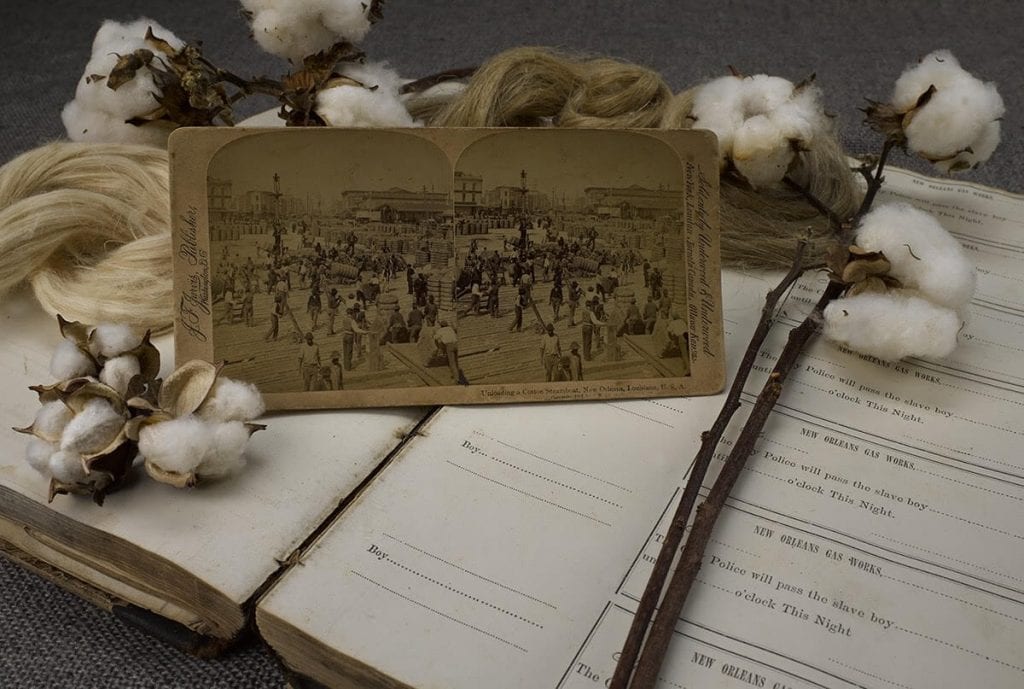 “I learned a lot during this project,” she says. “When you look at the slave passbook, the marriage certificate and the soldier’s journal — none of this is how the Civil War is typically represented. By simply looking at the tintypes, you see a completely different reality than what has been represented throughout history.”

“If we don’t know our history we’re bound to repeat it and forfeit any lessons learned in the process,” says McDaniels. “When your country empowers men like [United States Supreme Court] Chief Justice Roger Taney, who [while parsing the Constitutional clause that states all men are created equal in 1857] argued that the black man ‘had no rights which the white man was bound to respect’ in the Dred Scott decision, you have to deal with that history and understand the consequences.

“We must have a real conversation about the institution of slavery. We cannot ignore the fact that human chattels were used, abused and discarded to build tremendous amounts of wealth for white men and for the nation. Only then can we come to some agreement that moving forward, there are things that will take generations to unravel, and permit us to move forward in a different way.”

Though photographs of Murphy are not included in What Must Be Remembered, McDaniels saw parallels between the jockey — who epitomized the rise of the black middle class and contributed to the construction of popular notions about African-American identity during his lifetime — and the little boy pictured among a group of children dressed in their Sunday best on a cabinet card. Likewise, the soldier staring out from a tintype could have been Murphy’s dad (who was a veteran of the Civil War) and the elegant woman (whose portrait is embellished with a bouquet of flowers, cowrie shells and a marriage certificate in deference to her femininity and family status) might have been Murphy’s mother.

McDaniels believes these touchstones have the power to convey human stories and be cultural game-changers — which is why he is so committed to sharing the wealth.

“My hope,” he says, “has always been that exhibitions like What Must Be Remembered would encourage everyone to say, ‘Emory’s doing great things. Let’s go to campus and see what they have to offer!’”