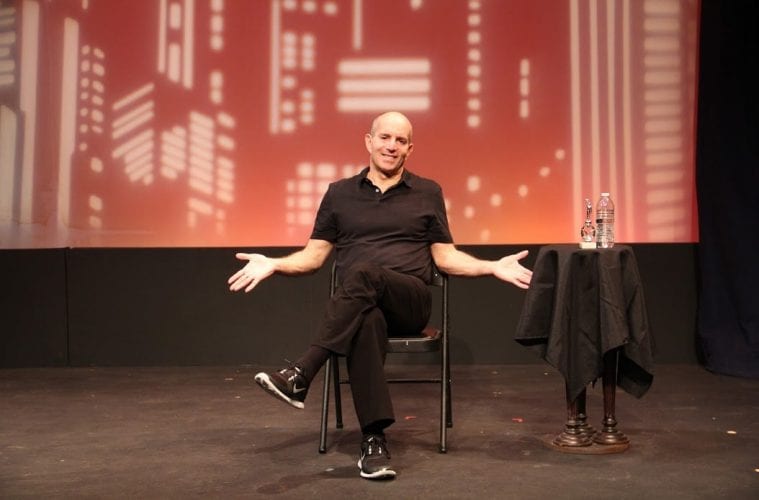 Preview: Comic Brad Zimmerman tells his story in “My Son the Waiter: A Jewish Tragedy”

Like many people, Brad Zimmerman moved to New York after college and turned to waiting tables to make a living.  He never expected the experience to last as long as it did, however — 29 years. Yet once he was finally able to write his first play and find a way to make money from his craft, he forever hung up his days as a server and took his gig on the road.

My Son the Waiter: A Jewish Tragedy — running March 18 through June 18 at 7 Stages Theatre — charts Zimmerman’s years as a struggling actor in New York and what it took for him to take the plunge into full-time performing. It also comically looks at his relationship with his mother, who expected her son to make big bucks as a lawyer or a doctor.

Zimmerman, now 62, went to New York in 1978 after studying acting at Rollins College in Winter Park, Florida. Not feeling solid enough about what he was doing professionally, he didn’t pursue his career wholeheartedly but became a waiter. Eventually he enrolled in a comedy class in 1996, which gave him some momentum. “I started going out into the world to see what I could do,” he said. “It was writing your own material, being your own boss, performing. It was a perfect niche for me. It was like an individual sport.”

A lot of what he did was for free, such as open mic nights. But in 2002, he sent a tape to bookers and was bold enough to send one directly to Joan Rivers. She loved it, and soon he had sent tapes to Brad Garrett and George Carlin as well. In 2006, he opened for Carlin and did that for two years. He also nabbed a small role as Johnny Sack’s lawyer on The Sopranos. It was a wonderful opportunity and paid well, but it pales next to the professional happiness he is dealing with now. “I am writing my own material and performing it and there is nothing like that,” he says. “TV is a money thing — and live theater is love.”

Around that same time he had started to write a one-man play based on his journey. “Most people, if they wait tables for 10 years and don’t make it, they opt for institutional America, a paycheck,” he says. Luckily, he weathered almost three horrible decades to pursue the project. He first produced the autobiographical piece in 2005 and tweaked it over the years, with 2013 being the first time he made any money from it. “It took me eight years to get to a point when it was commercially viable,” he recalls. When the show made its New York debut in 2015, it was supposed to run a few months — and lasted for 15. Producers then offered to buy the touring rights for the production. “All of a sudden I went from having no money to having a nice, little cushion. It was heavenly.”

In the show, he talks about his childhood and his family, his unsuccessful love life and his days as a waiter — which he never liked.  He worked for 10 restaurants during those years, some better than others, including one for 14 years, but it was mostly a hellish work life. “Looking for waiter jobs — there is nothing more humiliating than walking in having to fill out an application,” he says. “Getting off work at night felt like being released from prison.”

Yet his relationship with his mother — and trying to please her — is front and center. “A Jewish mother wants her son to be a doctor or lawyer, and here is this kid who is struggling and not doing anything,” he says. “She is naturally going to be concerned, almost overbearing in her comments and critical, worried about his finances.”

A few years ago, though, after seeing the show, she landed firmly in his corner and told him she doesn’t know anyone who could do what he did. “She was complimenting me — who could wait tables so long and then turn into such a success?” he said. “She was filled with pride at what I have done. She gets calls from people who love the show.” Of course, his mother would also like for him to make some more lucrative television money, yet that seems unlikely. “I would rather be where I am now than be on The Goldbergs — a piece of mediocrity — and be padding my bank account at the expense of my dignity. I am a purist and an artist.”

He frequently makes tweaks to My Son the Waiter: A Jewish Tragedy. One thing that keeps him going full throttle is a sequel, My Rise to the Middle, which he is in the early stages of booking. “It’s an evolution of where I am now, and it is giving me tremendous purpose to see if I can do it,” he says.

Atlanta is an ideal location for My Son the Waiter: A Jewish Tragedy, he feels, and he hasn’t been to the area since he last opened for Joan Rivers. He looks forward to the response. “Atlanta has a big Jewish population and a sophistication,” he says. “It is a cultured area. I think it will do very well and will resonate, and have people telling others to see it. I have always thought it was universal and not just for Jewish audiences.”