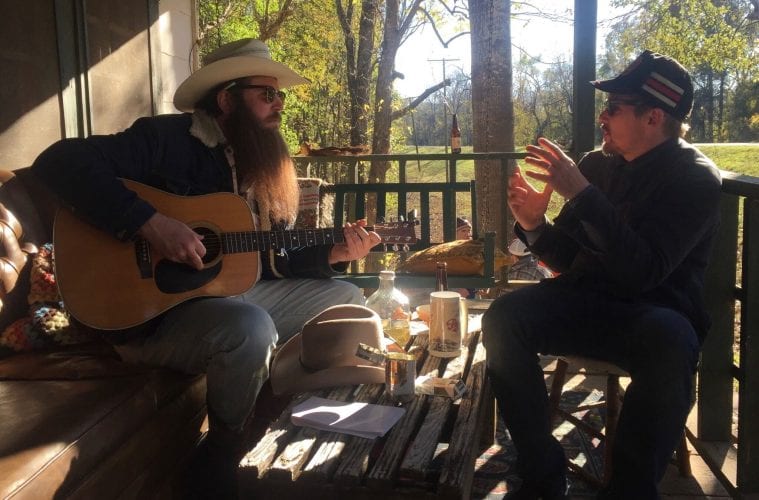 In the opening moments of Blaze, you might worry you’re in for a hard slog. That’s because the chronologically fragmented biopic flings us into the figurative deep end. We meet singer-songwriter Blaze Foley (Ben Dickey) late in his career, hammering on a drum set in a recording studio and ranting about Cesar Chavez and whatever else streams through his brain. A fed up studio guy screams at him, “You’ve been kicked out of every bar south of Virginia because you’re a pathetic drunk!” He’s right. In real life, Foley was a notorious, unmanageable mess. But he also wrote and sang like a dusty-winged angel.

The troubles and pleasures of putting up with such extremes is at the heart of Blaze, directed by actor Ethan Hawke with a screenplay cowritten by Foley’s widow Sybil Rosen, based on her memoir Living in the Woods in a Tree: Remembering Blaze Foley. (See Scott Freeman’s interview with Rosen).

You stand a good chance of liking Blaze as much as I did if you meet the movie halfway and allow yourself to be a little confused at first. The film is structured like memory: nonlinear, impressionist. (As the scenes pinwheel across the years, the length of Blaze’s ever-expanding beard can help you pin down where you are on the timeline.)

At first we hear more about Blaze than see him, as musician friends Townes Van Zandt (Charlie Sexton), no stranger himself to substance abuse, and Zee (Josh Hamilton) give an interview to a radio D.J. (Hawke). We can never be entirely sure if any of the tall tales his pals spin about Blaze are true — any more than you can tell, from one scene to the next, whether Blaze (born Michael Fuller) is staggering drunk or if he’s just limping as a result of his childhood polio.

Filmed in a hazy, nicotine-toned sepia, Blaze follows these musicians on the road and into dive bars, offering up their overlapping dialogue like we’re in a newly discovered Robert Altman film. The result is a kind of rowdy white noise that’s regularly interrupted by one of Foley’s aching ballads, which arise from the man almost in spite of the messiness of his life.

Blaze Foley began to write songs in earnest when he lived in west Georgia.

His touchstone in that life, at least for a while, is Sybil (Alia Shawkat), an aspiring actress he meets in west Georgia. The two move together into an idyllic, isolated house in the woods, bathing outdoors, frolicking like kids in a 1970s commercial and developing their art. “I don’t want to be a star,” Blaze tells her. “I want to be a legend.” Careful what you wish for.

Moving to Austin for more professional exposure, Sybil gets a job as a waitress to support them and works to build a career. But Blaze seems increasingly determined to sabotage his own — something he manages to do spectacularly some years later when he is courted by a trio of producers (Richard Linklater, Sam Rockwell and Steve Zahn, whose familiar celebrity faces scrape against the movie’s otherwise grainy, authentic tone).

The film is full of grace notes, like a duet Blaze and his sister sing to their once-fearsome dad (Kris Kristofferson), now shrunk by hard living into a brain-addled husk. (He’s a prefigurement of what Blaze himself might have become, if he’d lived to be older than 39). Also, the real-life Rosen plays her own disapproving mother in a comically uncomfortable scene when Sybil takes Blaze home to meet her very orthodox parents.

Blaze overstays its welcome a little in the last half hour; you can feel that Hawke just doesn’t want to let go of this story and relishes every dirt-road detour or stream-of-consciousness riff from Foley. It’s a long ride, but one worth taking. With this and his gripping, haunted performance in First Reformed, Hawke is having a pretty great year.

The real Blaze Foley, in the photos I’ve seen, had the unnerving, X-ray stare of a bird of prey. Dickey, by contrast, is more of a button-eyed teddy bear. A musician himself, making his acting debut, he makes us appreciate Blaze’s heart and talent, even while you want to reach through the screen and slap that glass of whisky out of his hand.

The film’s central theme comes near the end of Sybil and Blaze’s relationship. She loves the guy and, sure, it’s great that he writes songs about her. But does he really have to scrawl the lyrics all across the walls of their apartment, then pass out in the bathtub and let her deal with the mess?

Crying and worn down by his failure to keep his shit together, Sybil says, “My days of being your muse are over.”

In response, he murmurs, “Oh, I think they’re just getting started.”

Indeed. In its reflections on life and art, Blaze suggests how some of the greatest love songs can only be written after that love has been squandered. Sure enough, years later we see Blaze on the stage of a honky tonk, telling the indifferent audience of hardcore drinkers, “I wrote that song for a beautiful little Jewish girl with kinky hair. I thought that song’d last forever.”

Nothing does, though. The elusiveness of love and art, and their eternal power over us, is what makes Blaze so touching. Like one of Foley’s best songs, it’s a heartbreaker.