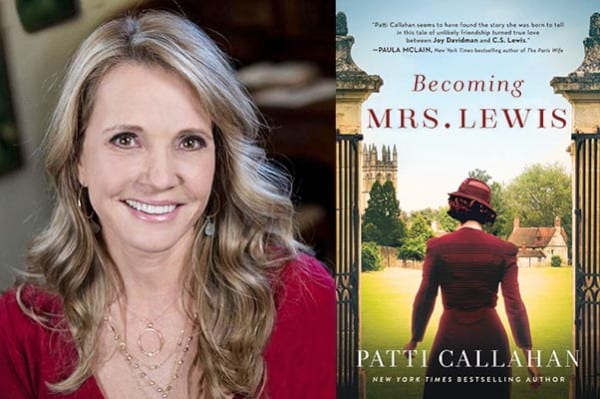 At one time, it was often said that “behind every great man there’s a great woman.” The stories of those women, the women who stood alongside – perhaps better than behind – the great men that history has recognized, are starting to have more light shed on them. Recounted history may have previously stripped their stories of breadth, detail and dignity, but today’s storytellers seek to reunite them with their whole truths, an evolution we can be grateful for. With the release of Becoming Mrs. Lewis, Atlanta-based author Patti Callahan brings 20th-century author, essayist and philosopher Joy Davidman back into the spotlight.

When we first encounter Davidman in Callahan’s work of historical fiction, she is mother and housekeeper first, philosopher and writer second. She is married to her first husband, writer Bill Gresham, a philandering alcoholic. In her darkest hours, Davidman, a woman born Jewish who evolved into a staunch athiest, stumbles into the world of Christianity in search of answers. As she struggles with her newfound faith, she reaches out to renowned British writer C.S. Lewis through a letter; their correspondence evolves into a deep friendship based on mutual respect that changes over time into love. But along the way, there are countless spiritual questions to be wrestled with on both of their parts.

One might assume that the primary story here belongs to Lewis. After all, he’s the one who has been translated into over 30 languages, whose books have sold 3 million copies over the years. He’s the one with the acclaim, the historic figure we’ve come to know as a gentle, introspective soul through his canonized works: The Lion, The Witch and the Wardrobe; The Screwtape Letters; The Great Divorce; A Grief Observed. But as Callahan’s account reveals, Davidman was a woman who stood on her own feet, who overcame the odds of the era that were stacked against her. In Callahan’s hands, Davidman emerges as a bold, adventurous spirit, cloistered by the unrealistic expectations surrounding femininity of her day. Though Becoming Mrs. Lewis is a work of historical fiction recounting Davidman’s courtship with Lewis, Callahan articulates her story so intimately and lovingly that the story seems intuited more than imagined.

This delving into historical fiction, Callahan’s thirteenth work, is new territory for the New York Times bestselling author. Her previous books, Losing the Moon, Between the Tides, The Perfect Love Song and And Then I Found You, amongst others, are Southern stories soaked in long summers, imperfect romances and coming-of-age rituals. Becoming Mrs. Lewis marks a departure for her, and the dedicated reader gets the sense that Callahan is willingly evolving with this story.

Davidman’s world unleashes new landscapes to Callahan’s pen, leaving the heated cicada summers behind for the icy tundras of northern New York in the depths of winter and the verdant rolling English hillsides that Lewis called home. With her reimagining of Davidman, Callahan boldy ventures into a new era of her own work, one where she disassembles the stories presented to us too plainly as fact and breathes fresh life into them.

Patti Callahan will read from and discuss Becoming Mrs. Lewis on Tuesday, October 2, at 7 p.m. at the Atlanta History Center.