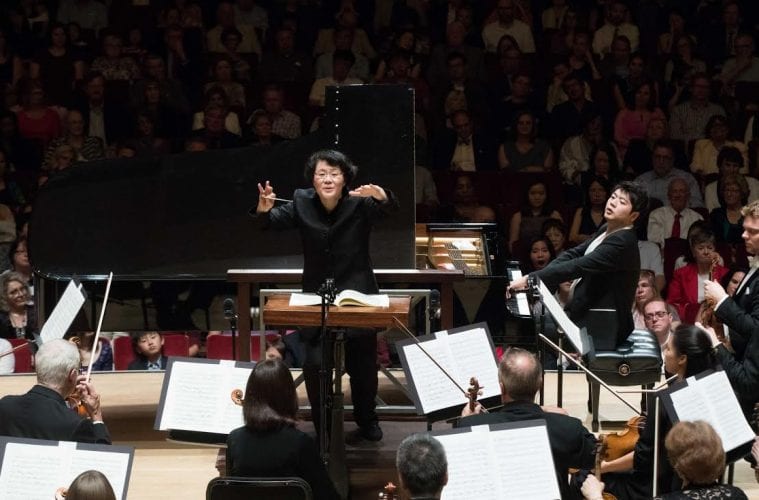 Lang Lang’s presence fueled not only a sell-out of the hall’s 1,700-plus seats, but also another estimated 150 premium onstage seats placed on chorus risers behind the orchestra.

And despite the evening’s rainy weather, the concert was simulcast outdoors on an exterior wall of the High Museum of Art next to the Sifley Piazza lawn. All 600 advance free tickets were scooped up within a single day. The rain stopped just as the concert began and stayed away for much of the performance, so the simulcast took place as planned. But the weather kept most of those ticket holders away. The concert, however, was live streamed on several forums where fans could view it in dry comfort.

The ASO turned an excellent performance for its expanded audience, reaching its zenith in the second half when Lang Lang joined them. The program opened with Mozart’s Serenade in G Major, K. 525, familiarly known as “Eine kleine Nachtmusik” (“A Little Night Music”), which has a solid status as Mozart’s best known work within the horizons of American popular culture. Not to suggest that the other featured works in the concert were obscure — they are among audience favorites and definitely high end among the composer’s output.

Chen and the ASO followed with Mozart’s Symphony No. 40 in G minor, K. 550, the middle child among his three final symphonies, all written within a matter of weeks during the summer of 1788. The Serenade and the Symphony were approached in a rather muscular way, evidenced both by sound and Chen’s conducting gestures. That character was enhanced by the use of a large complement of strings, rather than one more consistent with the 18th century in size. But it was most evident through Chen’s vigorous, robust approach to the music, particularly to shaping phrases.

This energy propelled the Symphony No. 40, and Chen’s understanding and handling of the opening bars of the first movement paid ode to the approach taught to many of us by Leonard Bernstein in one of his television broadcasts about the piece.

Female conductors are still a rarity in the classical music world, and Chen began her career here in Atlanta. She was a conducting fellow — essentially an assistant conductor — for two years with the ASO, from 2007 to 2009, before a one-year stint as assistant conductor with the Baltimore Symphony. She was appointed music director of the Memphis Symphony Orchestra in 2010, a post which she held until 2016. Her current positions include music director of the Chicago Sinfonietta and artistic director and conductor for the National Taiwan Symphony Orchestra Summer Festival since 2016. She retains professional ties with Memphis as conductor laureate.

After intermission came what the teeming audience was waiting for: Lang Lang took the stage for Mozart’s Piano Concerto No. 24 in C minor, K. 491, which many aficionados consider the pinnacle of the composer’s keyboard concertos. It premiered in April 1786 at the Burgtheater in Vienna with the composer as soloist, leading the orchestra from the keyboard. Mozart did not write down his improvised cadenzas for the concerto, one each in the first nor the third movements. Nevertheless, a number have been written by other pianists and composers. Lang Lang chose to use cadenzas created by legendary late Mozart specialist Lili Kraus.

Written two years before the Symphony No. 40, this concerto is radically different from Mozart’s two preceding piano concertos. It is dark and brooding, one of only two he wrote in a minor key, and as much a concertante work as a concerto. Lang was able to give the solo piano part more luminescence and draw it out of the texture a little more without banging. The most prominent technical aspect of his performance was the smooth liquidity of the rapid right-hand passages that dominate the part, combined with an overall sensitivity to musical expression.

Lang returned to the stage for a contrasting showpiece encore: the popular, flashy “Grande Valse Brillante,” Op. 18 No.1, by Frédéric Chopin, in which he let loose with much greater abandon.