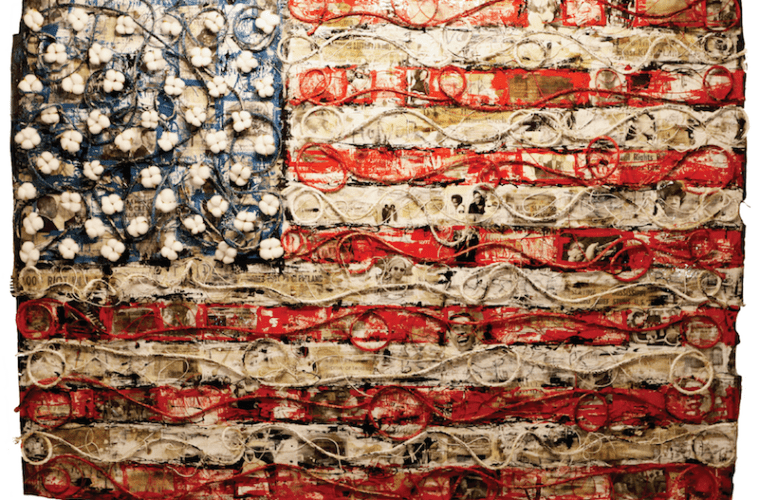 As you enter the space virtually, gallery director September Gray delivers a welcoming audio declaration of these visual stories. The “fertile offerings” of Strange Fruit disrupt and expose Black beauty in countless ways, including the symbolic ‘beauty trap.'” This strange fruit is the “brutality of women, the stolen identities of our language, our culture, our history and rights of being born,” says Gray.

With Conversations, London-based visual artist Àsìkò presents “conceptual images about violence against women and its intersection with African culture.” Symbolism thrives with the use of plants and flowers as the artist showcases editions of 30 x 20-inch metallic prints. Ejọ́ (2016) shows the strength of the female back with unique radial loops or spiral patterns reminiscent of fingerprints. As if — depending on the eye of the beholder — to pontificate or acknowledge whether one’s being belongs to self or is claimed by someone else. It’s likened to a sense of ownership that wasn’t offered. There’s also a striking headpiece with the subtleties of peacock feathering and shells.

London-based Àsìkò presents “conceptual images about violence against women and its intersection with African culture.” This 2016 piece is titled “Ejọ́.” (All photos courtesy of the gallery)

Àsìkò’s patterns in each image are so intricate that you may not realize where the they begin or end. You’ll also see work from 2018, including Stolen Identities, Masquerade Lies and Exhausting. In these, Àsìkò uses flowers and plants as “organic expressions of culture, representing beauty and fragility as well as decay and destructive power of the physical and psychological effects of these violent practices of female genitalia mutilation, breast ironing, child marriage, sex slavery.”

Slab-building and pinch-forming are the work of the Boston-based Briggs. Of Knots Inside, glazed stoneware from 2019, he says: “The wounded, broken, pierced and knotted pieces have a presence of dignity and a certitude. The ability to be is not canceled but only refuted.” You’ll also experience Briggs’ Play Area: Locke Blocks. Pay attention to the depth of these 12 x 12 x 2-inch blocks, detailed with symbolism from American and Confederate flags. In one, a Black child is being cleaned by a white child wiping all of the “dirty” off the Black child’s back. Lettering on the block says, “Someone from whom all is in vain.”

How Long Can We Go?, a 2020 triptych from Atlanta-based painter and mixed-media artist Okeeba Jubalo, features mixed-media collage on 24 x 18-inch canvases. It includes newsprint from days of old and Jubalo’s signature “aged photos,” here a blend of facial features of Black men  (in #2) as if to say, “We’re different, yet we’re all seen the same.” Messaging on this piece includes “school segregation banned” and “Negroes riot in Cleveland” and a Birmingham, Alabama, police department arrest placard bearing “118593” and the date “4-12-63,” which was associated with the Rev. Martin Luther King Jr.’s 1963 arrest. 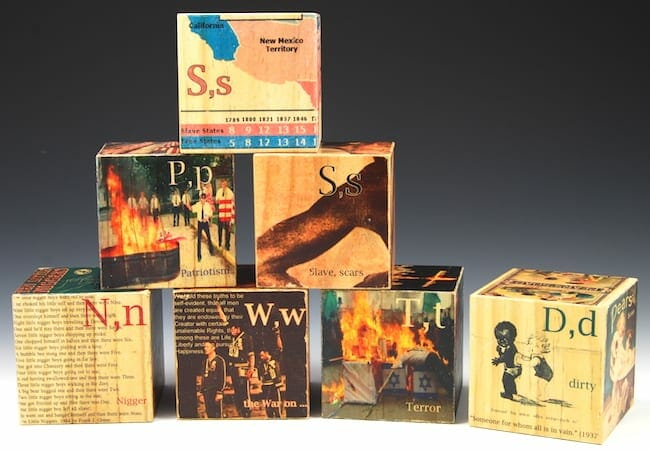 Jubalo creates a poignant narrative for “those made invisible in America’s social, economic and political infrastructure,” stark memories that also reflect today’s African American experience. The exhibit includes Jubalo’s self-produced music video of  “That Blackness” featuring Nina Simone. He uses a wide range of historical footage of forefathers — sharecroppers, Olympians, soldiers. Jubalo’s lyricism poses a lasting question that expresses the dynamic of this show’s artwork, ” . . . something has to give besides myself for a change.”

To some, Strange Fruit may peel away some truths in one’s own heart, but only if you’re willing to see and receive it. Let the questions and discussions begin. As Gray says, “take a breath and unravel the knots inside.”