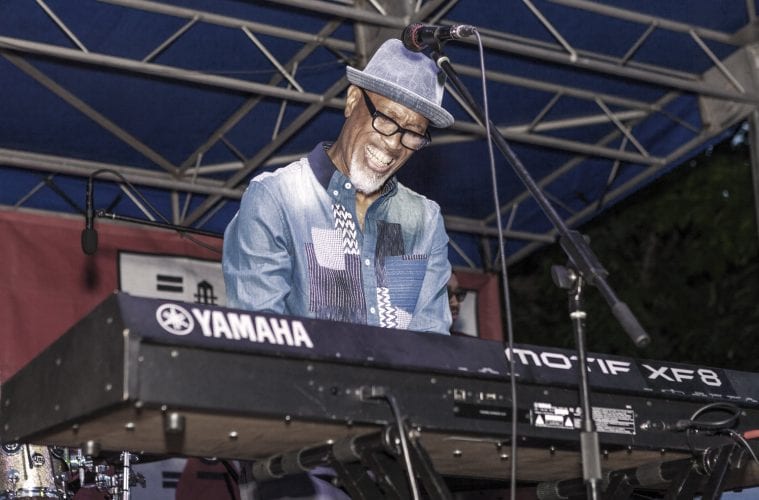 Atlanta’s contemporary urban jazz king Bob Baldwin returned to the Jazz on the Lawn series this past Friday at the Callanwolde Fine Arts Center. Predicted rain held off, and Baldwin’s band delivered an inspiring concert of originals and covers to the enthusiastic audience gathered in Callanwolde’s lush, grassy amphitheater.

This year marks a milestone in Baldwin’s long career as an international musical artist, composer, producer and entrepreneur: 30 years since his first record release, I’ve Got a Long Way To Go. Since then, Baldwin has recorded some two dozen solo albums and garnered 12 top-10 Billboard Jazz chart hits, with five Billboard Jazz top-20 singles since 2011 and 11 top-20 albums in this century. His syndicated NewUrbanJazz Radio show recently aired its 500th show and will celebrate its tenth year on the air in October.

Baldwin was front and center on stage, playing a Yamaha moX8, his keyboard and vocals underpinned solidly by drummer Jorel “JFly” Flynn and electric bassist Tres Gilbert — a foundation to the sound that you didn’t just hear, but felt it in your bones and blood. Baldwin was prominently flanked on either side by flutist Ragan Whiteside and vocalist Lori Williams. The formidable, experienced talent present in this quintet electrified the evening.

They opened with Baldwin’s “Be Blessed (No Stress),” a number that in July peaked at No. 6 on Billboard Radio and at No. 1 on the MediaBase Jazz charts. Then, during his “Get Over It,” Baldwin stepped aside for a time to give Whiteside and JFly the stage to showcase a great dialogue between flute and drums. “In the Moment” afforded Baldwin’s right hand dexterity some deserved display.

A little family fanfare ensued with the introduction of “Corey’s Bop,” inspired by Ragan’s son. The piece is featured on Whiteside’s 2017 Treblemaker album, produced by Baldwin. Along with another track, “Early Arrival,” Whiteside’s recording of “Corey’s Bop” has taken a top-10 position on Billboard’s Smooth Jazz airplay chart, making them the flutist’s first back-to-back Billboard top-10 singles drawn from one album.

Vocalist Lori Williams came to the fore in “I Like the Way You Talk to Me,” which she cowrote with Baldwin, a number that appears on her new Out of the Box album, produced by Baldwin and released about a week ago. The song is already getting airplay on Sirius XM. Williams is an impressive singer with both agility and astute capacity for phrasing, shaping long notes.

Of his version of  Paul McCartney’s “My Love,” Baldwin said from the stage, “The Beatles have never sounded this funky.” Beyond just giving it a funk character, the rendition also added a richness to the song that made it a convincingly powerful realization — much credit due to Williams’ vocals.

The musicians took on a couple of songs made famous by vocal groups. They brought cool heat to the stage with a Jackson 5 song, “I Wanna Be Where You Are,” then launched into a Stylistics hit, “People Make the World Go Round.”

As the local neighborhood’s concert curfew time arrived, Baldwin got off a final song at the audience’s demand. An extended intro gave Gilbert opportunity to play some extensive lead guitar-like lines high on the neck of his bass before the entire song morphed into a laid back but funky rendition of the 1972 Seals and Croft hit “Summer Breeze.” In the midst of it, playing a two-chord with his left hand over the bass and drums ground, Baldwin took Williams’ cell phone and recorded a video of a long improv dialogue between Williams and Whiteside before the group rounded out the song and brought the concert to a close that matched well the mood offered by the cooler after-sundown temps.

Baldwin and his band play Atlanta again, featuring vocalist Williams, on September 20 at City Winery in a double CD release party celebrating both William’s new Out of the Box album as well as the official debut of Baldwin’s Bob Baldwin Presents Abbey Road and the Beatles.