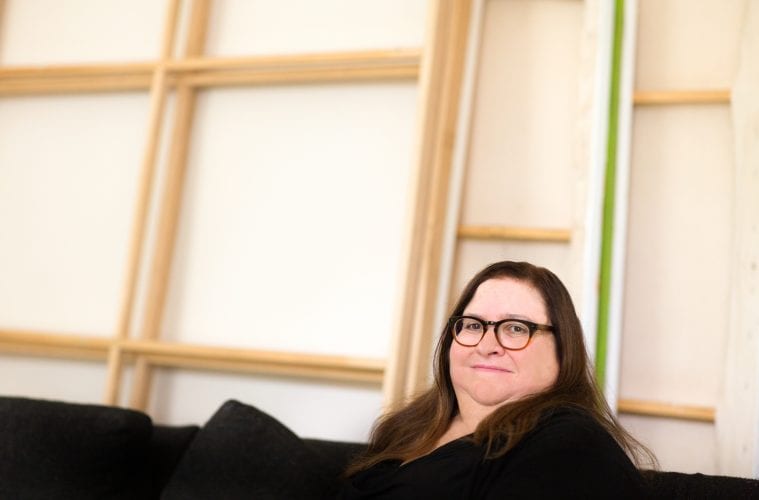 “It’s really about painting” may be an odd thing for a painter to say about her work, but Deanna Sirlin often finds herself compelled to repeat it. The Atlanta-based artist emerged into international prominence when a commission from the High Museum in 1999 had her placing huge transparent photographic reproductions of her swirling brushstrokes and vivid colors across the windows of Richard Meier’s three-story glass atrium on the Woodruff Arts Center campus.

The idea was to place viewers inside her work in a monumental way, to make them feel what it was like to be totally absorbed in a painting during the moments of creation. The success of that public work, somewhat ironically, resulted in the growth of Sirlin’s reputation — not entirely as a painter — but more as a public artist. Since 1999, she’s created her large-scale installations all over the world from New Orleans and Venice to London and Turkey.

The artist’s upcoming show Translucence at the City of Atlanta’s Gallery 72 represents a significant and symbolic homecoming for Sirlin, an opportunity to declare once again in her own way that it’s all about the painting. On the windows facing Marietta Street will be five of her famous C-print transparencies guiding viewers into the gallery. Inside, alongside her paintings will be recent collages, intimate works comprising bits of discarded transparencies, cut photographs, found materials and pieces of recycled canvases. The upcoming show will also include something totally new for her, an animation created in collaboration with New York-based artist Matthew Ostrowski. All of it, she says, is designed to lead viewers back to retrace and share her sense of discovery and revelation in the act of painting itself.

Sirlin utilizes different media as an artist, and she similarly wears multiple hats outside the studio, as well: author, educator, mentor, editor, critic. (As a critic, she’s a frequent and prolific contributor to many journals, including ArtsATL, and she is editor-in-chief of the online arts and culture journal The Art Section).

ArtsATL photographer Karley Sullivan recently visited Sirlin at her home studio in Milton, Georgia, to capture yet another side of the artist and her work as she prepares for her Gallery 72 opening on Thursday, August 16.