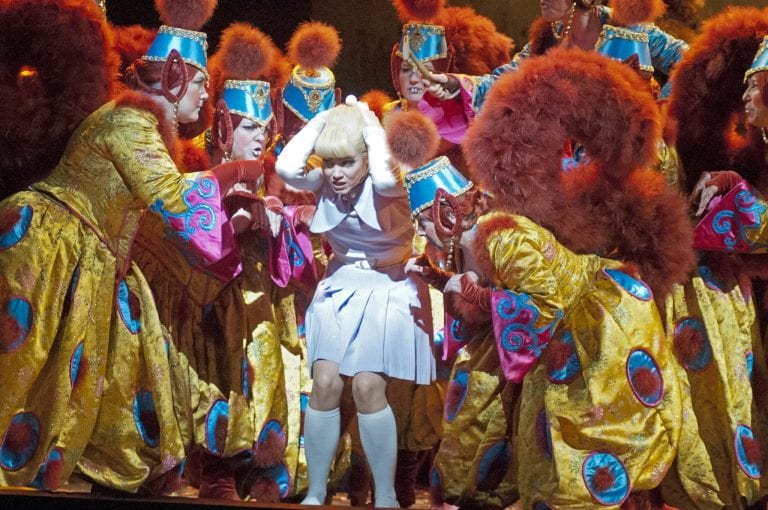 Back in the 1980’s, Paul Reubens’ television show, “Pee-wee’s Playhouse,” was ostensibly aimed at the pre-school set, but it included sly adult jokes that could sail over the heads of the little ones. It developed a cult following for a while, and hipsters would set their VCRs for weekday mornings. That seems to be the conceit behind Peter Ash’s opera “The Golden Ticket,” which opened at the Atlanta Opera on Saturday night.

Based on the popular children’s book and movie “Charlie and the Chocolate Factory” by Roald Dahl, “Ticket” was originally co-produced by the Opera Theatre of Saint Louis and Ireland’s Wexford Festival Opera, and it had its premiere in St. Louis in 2010. This is its first production since the original collaboration, and it’s pretty much a rented show, using the same sets and costumes and many of the original cast members, with Atlanta providing the orchestra and chorus.

The libretto, by Donald Sturrock, basically shrinks the book to opera length and sets much of it as rhyming couplets. For those not familiar with the story, it revolves around Charlie, a desperately poor child and a dreamer, and a contest sponsored by Willy Wonka, the eccentric owner of a chocolate factory.

Charlie and four other winners get a visit to the secret factory and a lifetime supply of chocolate. The factory tour becomes an adventure fantasy, but the other four kids are eliminated due to character flaws. In the end, Wonka designates Charlie as his heir and the other contestants learn their lesson. Jokes from the book are the most entertaining part of the evening, though the fat jokes might seem insensitive today (the book was written in 1964).

Ash, an experienced conductor relatively new to composing (this was his first opera), has written a score that is at its best whenever he has a chance to fit in an opera joke or quotation, or a sound effect (such as bassoons mimicking digestive problems). A problem here is that the opera references might be too subtly placed and too obscure for much of the audience. For example, a scene featuring a “chocolate river” gets a quote from Wagner’s “Das Rheingold,” an opera never performed by this company. The role of Mike Teavee, one of the children, who is obsessed with television, is sung by a countertenor and mimics the stutter of many of Handel’s roles, but the company hasn’t done Handel either.

A few of the opera caricatures are less obscure. Augustus Gloop, one of the kids, is a send-up of the “fat tenor” stereotype (I’m just the messenger here), and another child, Violet Beauregard, is portrayed as a coloratura soprano given to excessive display. But most of the musical quotations, which include Ravel, Janacek and Bernstein, probably were more suited to the audiences in St. Louis and Wexford. Both places have long been on the summer opera travel circuit, where large numbers of the audience include opera connoisseurs who love these sorts of exercises. And yes, there are people in Atlanta who fit that mold. I’m merely suggesting that the majority of the audience here might not be prepared to play the game at this level.

Beyond this pastiche and the jokey stuff, the score was quite professional, rhythmically varied, and sometimes a bit edgy, but Ash never showed us a voice of his own. Another problem has to do with writing for the voice to be understood. From my seat in the back, it was possible to make out only a small fraction of the libretto without resorting to the projected titles. Some of this could be attributed to the use of exaggerated voice types, but it was true even for Wonka, sung by a bass-baritone. And it all went on too long.

Dennis Hanthorn, the Atlanta Opera’s general director, told me last year that this opera was chosen because it had the potential to broaden the company’s audience. Apparently he was talking about children and their parents. Saturday’s audience included a sprinkling of kids, but most seemed to enjoy the entertainers in the foyer more than the opera itself. And there was an exodus of children (with escorts) at intermission, including the adorable girls who sat in front of me and took naps during the first act. The work clocks in at over two-and-a-half hours, a long sit for kids. Surprisingly, only one of the four performances is a matinee.

Introducing children to opera is a noble intention, and the Atlanta Opera has made forays in that direction, notably its “Rabbit Tales” project that was adapted from Joel Chandler Harris’ stories and opened last October. By keeping costs very low and staging requirements minimal, shows such as “Rabbit Tales” can go to the schools and communities to reach lots of children.

The real question is whether an opera company that is really at the margins of existence as a full-time professional enterprise, with its season reduced to just three main-stage operas, ought to devote one of those precious slots to a work that, regardless of spin, is still built around a rather sugary (pun!) children’s story. Operas are built around powerful adult themes: sex, death, betrayal. These are the driving forces for all that intense music. Underlying even the farces is some very grown-up material. Opera is also obscenely expensive. George Bernard Shaw said that it was mankind’s most expensive invention, “second only to war.”

Assuming that “Ticket” costs about $1.5 million — including an allocation of overhead (the company’s annual budget is about $5 million) — and that it is seen by 3,000 children over its four-performance run, the cost per child is $500. And that includes the ones who leave at intermission. I’m sure there are those prepared to argue with these assumptions, but the basic argument is that one-third of our tiny opera season is a powerfully expensive experiment in outreach. Might it not be better to use that money to present some of those operas that this one referenced, but which much of the adult audience here has yet to hear? Another quote from Hanthorn comes to mind: “For much of our audience, every performance is a world premiere.”

Speaking of those adults, how did they enjoy “Ticket”? Atlanta audiences are hard to read. It would take a nude version of Alban Berg’s “Wozzeck,” with flag burning somehow thrown in, not to get a standing ovation here. But on this night the standing happened later than usual and the ovation seemed tepid. The crowd certainly didn’t buy in for the audience-participation part of the evening, where they were supposed to applaud when a light came on, or shout phrases at the stage on cue. Another problem, and not a minor one, was suggested by the rows of unsold seats. And empty seats everywhere suggested that subscribers, whose contributions pay much of the company’s costs, had decided to sit this one out.

A related question is this: are we using up our allocation of contemporary opera with this project? Hanthorn’s vision includes new works, and he has managed to present Carlisle Floyd’s “Cold Sassy Tree” and Philip Glass’ “Akhnaten” (semi-staged at Emory) since arriving here. Both are 20th-century masterpieces and presumably helped build an audience to support new works in the future. We might not be so lucky with “The Golden Ticket.”

Regardless of the merits of the work or the reception it got, the performance was solid. The cast, almost all new to Atlanta, was excellent without exception. Atlantan Ruben Roy, a boy soprano, portrayed Charlie (the only role sung by a child) with a sweet, soaring voice. The role has been double cast, and Benjamin P. Wenzelberg will sing the final two performances, according to director Michael Shell. (Saturday’s program mixed up the dates, misidentifying the evening’s star performer.)

Visually, it was a stunning night. The fascinating sets, by Bruno Schwengl, were probably the most sophisticated in the Atlanta Opera’s history, and they added quite a lot. The costumes, by Martin Pakledinaz, were about as much fun as costumes can be, especially the suits for the giant squirrels. The stage direction, by Shell (who was assistant director in St. Louis), was just right: energetic without going overboard. The chorus showed that they could move on stage in funny costumes and still sing well. Despite the problems, there was much to like about the evening.