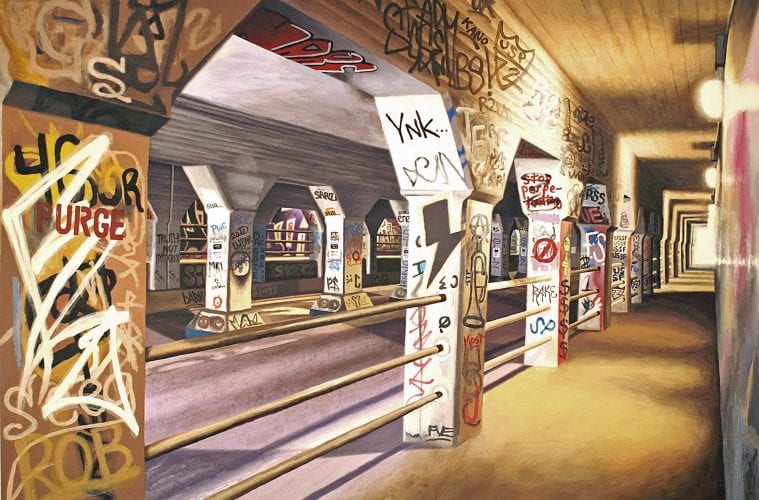 A quick roundup of some current exhibitions: Most artists use impasto, built-up overlays of paint on canvas, for the sake of a complex surface texture. The color-laden abstractions of the late Georgia painter Herbert Creecy are a well-known example.

By contrast, Florida artist Lilian Garcia-Roig, whose work is at Thomas Deans Fine Art through March 31, applies her oil paint straight from the squeeze bottle (a tube would produce too thin a line) in order to reinvent plein-air landscape painting.

At a normal viewing distance, the thick layers resolve into the clearly defined foreground shapes of leaves, vines and branches, much as they were found on site and painted in a single day. The dappled indefiniteness of the background is also surprisingly close to the effect that a camera would capture.

It would be interesting, in fact, to compare Garcia-Roig’s paintings with the similarly realist yet abstracted woodlands found in the photographs of Kathryn Kolb, who is also represented by Thomas Deans.

Garcia-Roig is scheduled to deliver a gallery talk about her technique at 6:30 p.m. Wednesday, March 7. Kolb will discuss her work (which is not in the current exhibition) at 6:30 p.m. March 26. (Garcia-Roig and Kolb are also participating in “Trees,” opening March 8 at the Swan Coach House Gallery.) Emerging Atlanta artist Julianne Trew makes her subtractive paintings, at Mason Murer Fine Art and Kibbee Gallery for the month of March, by removing rolled-on paint from linoleum panels, using everything from napkins to Q-tips.

The floating conglomerations of objects depicted in them resemble seed pods, spiny sea creatures, clusters of fruit, tufts of feathers, petals and stamens and spirals of who knows what, but when looked at closely, they are none of these. The forms melt into one another and transmute whenever we try to make exact visual sense of them.

They are, in fact, as pure a product of the subconscious as we are likely to see this season in Atlanta. As elusive as, say, Max Ernst’s famous frottage paintings, they look like perverse versions of Rococo run amok, with the sensuous results being disturbingly dark rather than playfully light.

As titles such as “Dreamcatcher,” “Aura” and “Messages” suggest, Trew is well aware of the visionary quality of her work. What distinguishes it from garden-variety versions of contemporary surrealism is its genuine originality. Instead of reproducing others’ overly familiar images from the inner world, she creates exceptionally distinctive ones of her own. At Mary Stanley Projects through March 15, the drawings and paper cutouts of New York artist and former Atlantan Samuel Stabler fall into two primary categories. One set of drawings replicates the general composition of masterworks from “Washington Crossing the Delaware” to “The Raft of the Medusa,” a sketch that is then provided with an overlay of transparent color from a highlighter pen.

The other, larger works begin with a drawing by Stabler on the reverse of a sheet of paper, a complex abstraction that becomes the basis for carefully executed cutout segments. Eventually the whole resembles free-form lacework when viewed from the front, with the original inspiration concealed.

Coming so soon after the close of Georgia State University’s exhibition of contemporary works in cut paper, Stabler’s exhibition demonstrates the further ways in which the technique can be extended and establishes new possibilities for the pigments of the humble highlighter. At Callanwolde Fine Arts Center through March 23, Christina Bray’s paintings present intown Atlanta landmarks that are favored sites of graffiti artists. Her works have the disadvantage shared by meticulous realists everywhere: viewed in reproduction, they look like color photographs rather than the remarkable renderings on canvas that they are.

Bray has remained true to the facts of the sites in near-photographic fashion as well. Rather than inventing details, she has devotedly reproduced the lettering and mural images she found, at most subtly highlighting ironies of juxtaposition while delighting in the paradox of replicating graffiti art and its gritty urban venues in traditional fine-art fashion. The Pullman Rail Yard and the Krog Street Tunnel have seldom if ever before been so dramatically presented in any medium. Diane Kirkland’s color photographs of parts of the Georgia landscape are on view at the Fernbank Museum of Natural History through April 29, as an aesthetically charged part of the museum’s educational mission. Kirkland’s photographs poeticize such familiar sites as Ossabaw Island (here helpfully tagged in the wall label as a “barrier island” to correlate the photography with the museum’s permanent exhibit “A Walk Through Time in Georgia”).

“Ossabaw Rookery” is such an astonishing image of nesting and flying birds — all in vividly diverse poses and illuminated by a light that seems almost preternatural — that the scene seems more like a Photoshop fantasy than the factual document it is. The saturated colors of “Doerun Pitcher Plants” show the plants in a hallucinatory shade of luminous green that likewise seems more like the result of manipulation than the happy accident of natural light. And the poetic pastels of “Hellhole Pond, Ossabaw,” the result of the filtering effects of fog, make the place seem more paradisaical than hellish.

If we didn’t know from personal experience the extraordinary perceptions that real-life light makes possible, we would suspect artistic trickery throughout this show. But the light really is like this, and photographs seldom capture it this well.