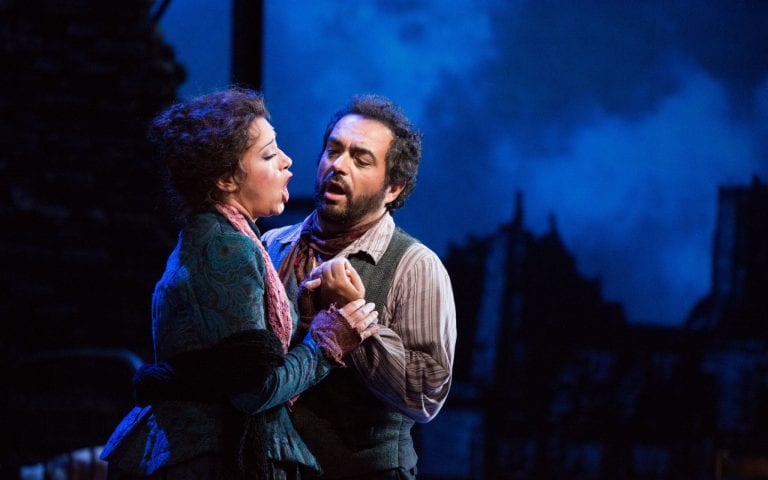 The Atlanta Opera has mounted Puccini’s La Bohème no less than six times in its three-and-a-half-decade history and it is the perennial favorite which leads the company’s main-stage offerings this season.

This version of the production, directed by Tomer Zvulun, the opera company’s general and artistic director, opened this past Saturday. The music was conducted by Arthur Fagen, with scenic and projection designs by Erhard Rom. The three remaining performances will take place at the Cobb Energy Performing Arts Centre tonight at 7:30, Friday at 8 p.m. and Sunday afternoon at 3 p.m.

It is not the first time Zvulun has worked with Rom’s sets for La Bohème, which were originally designed for Opera Theatre of Saint Louis. They were co-creatives in Seattle Opera’s critically acclaimed production of the opera in 2013. Taken together, Rom’s scenics and Zvulun’s direction give this production its particular signature, bringing the story out of the 1830s and into Puccini’s own era, the Paris of the 1890s.

That is significant to the cultural context in which the characters play out their story. The central district of Paris of the 1830s, with its narrow streets no wider than five meters amid crumbling remains of medieval structures, was full of crime, disease, decay and intense poverty.

By contrast, this production places La Bohème smack in the middle of what would, in retrospect, be called the Belle Époque — an era in stark contrast to the horrors of two world wars that would come in the first half of the next century.

In the 1890s especially, between the Exposition Universelle of 1889 and another in 1900, Paris was a global center of optimism, a place of regional peace, prosperity and affluence where science, innovative technology and the arts flourished — even as it was concurrently one of political and intellectual turmoil.

While it was an era of joie de vivre, there remained a large economic underclass, and poverty in the urban slums of the City of Light that remained endemic long after the era was over. And yet, it was a cultural environment in which the popular image of a poor bohemian artist became fully, perhaps irretrievably, romanticized.

It is in this context, played amid Rom’s visually open and atmospherically evocative sets, that Zvulun’s direction carved out a more direct, more immediately humanistic dramatization of the story beyond the basic verismo of Puccini’s work. In both the often comedic first two acts and the melancholic final two acts, what one feels most strongly is the camaraderie of the six young protagonists, as well as the joys and tensions of the two love relationships. It is the nature of all the relationships, whether in moments of pathos or comedy, which came to the fore.

This was also due to the excellent ensemble of singers, assured by conductor Fagen’s leadership from the pit. The music underscored the voices and drama with perhaps the Atlanta Opera orchestra’s best playing to date, beautifully rendering Puccini’s lush and heady score. Walter Huff’s able chorus contributed greatly to the production’s impact, especially in the ebullient second act, after which they took their curtain call for the evening.

The second act was also occasion for some stepping out of overarching realism into some self-conscious theatricality, especially with “Quando men vo” — familiarly known as “Musetta’s Waltz” — where there was direct comedic play to the audience by soprano Leah Partridge as Musetta, who seemed to have the ability with a single gesture to command special lights for her spot on stage from lighting designer Robert Wierzel’s skillful illumination.

Of the six principal singers of the cast, all but Partridge were making their Atlanta Opera debuts. Tenor Gianluca Terranova offered an appealingly sympathetic turn as the poet Rodolfo, brilliantly paired with soprano Maria Luigia Borsi as Mimì, lovingly playing her as a familiarly vulnerable young woman, but not a waif, who also possesses some quiet inner strength. Baritone Trevor Scheunemann as the hot-headed but pragmatic painter Marcello was a fine counterbalance to Partridge’s flamboyant and opportunistic Musetta, who by the end evolved into a compassionate member of the circle of artistic friends.

Bass-baritone Nicholas Brownlee as philosopher Colline and baritone Theo Hoffman as the musician Schaunard brought out the best in their respective roles, rounding out the excellent ensemble. Among several minor roles, two locally based singers dispatched theirs ably: bass-baritone Alan Higgs, playing dual comic older roles of landlord Benoit and the wealthy Alcindoro, and tenor Timothy Miller as Parpignol the toy seller.

Those planning to attend one of the remaining three performances of this Bohème will surely find the experience more than satisfyingly engaging.