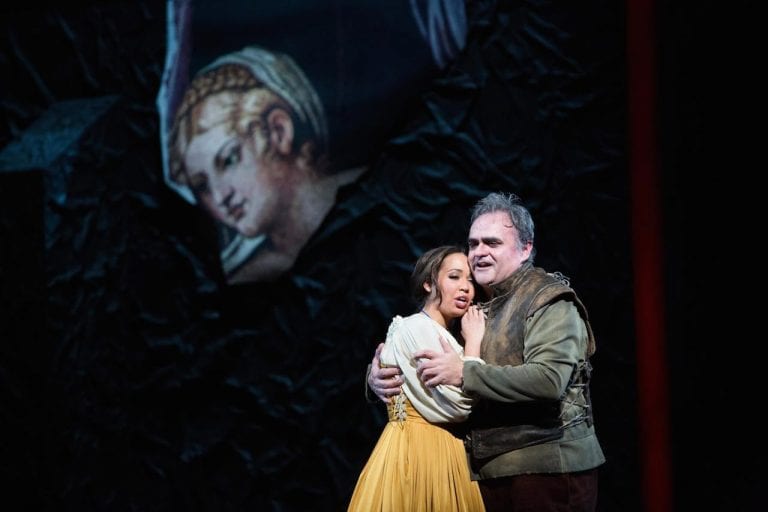 Nadine Sierra and Todd Thomas in the Duke's palace. (Photos by Jeff Roffman)

The Atlanta Opera’s Rigoletto, which opened Saturday, succeeds more often than not, carried by fine performances by soprano Nadine Sierra as Gilda and Todd Thomas as Rigoletto, and a production that places an intense focus on the complex character of Rigoletto.

Sierra has a bright, crystalline tone and is a fine singing actress, persuasive as a woefully overprotected girl of her era. It helps that she is attractive and moves gracefully on stage. Her coloratura technique is superb, and she can trill perfectly while lying on her back.

So many of today’s sopranos sound alike, and Sierra’s voice is distinctive, with a lively feel. Still, the voice is on the small side, and her success here seemed partly due to the willingness of conductor Joseph Rescigno to subdue his orchestra whenever she was singing.

This problem was more noticeable with Scott Quinn, who portrayed the Duke of Mantua. The role calls for a robust, pinging Italian tenor. Unfortunately, these are in short supply and tend to be booked up by opera companies with bigger profiles and budgets than ours.

Like Sierra, Quinn has a very distinctive voice, with a rapidly pulsing sound. And like Sierra, his intonation was superb. He acts well and looks great. It’s just that he doesn’t fill the room with sound. One big disadvantage to the Cobb Energy Performing Arts Centre is that it’s tough on smaller voices.

There was no such problem with Thomas, the Rigoletto. Despite its light, lyric qualities, his voice is essentially a dramatic baritone with a nice ringing top and ample power. Experienced in the role, he brought a richly complex understanding of his character, shifting emotions as his world collapsed.

Another singer with plenty of horsepower is Atlanta native Morris Robinson, who sang Sparafucile. His booming, focused bass gave his character a chilling effectiveness. Mezzo-soprano Krysty Swann was impressive as Maddalena. Bass Nathan Stark was a noble Monterone.

The company’s chorus is its most consistent asset. Rigoletto uses an all-male chorus, and these guys were simply excellent.

The overture went well with a nice Italian swagger and rhythm. But the sound from the pit soon became more problematic. Rescigno was presumably trying to hold things down to protect the lighter voices in the cast, but the orchestra was underwhelming even when the bigger voices held forth, and there were coordination issues.

As was the case with Madama Butterfly in November, Tomer Zvulun, the company’s director, chose to use one of his own productions, this one previously seen at Boston Lyric Opera and Opera Omaha. This time, however, he brought in Stephanie Havey to re-direct it, so while he had created the concept, she dealt with the acting and moving people on stage, which she handled with dispatch.

The minimalist sets, abstract but with period details, were designed by veteran John Conklin, and consisted of walls with a sort of parapet from which the duke’s courtiers could peer down, a little doll-house city atop everything, and large movable panels.

For the duke’s palace, the panels were initially covered with collages of seemingly religious paintings or tapestries from Renaissance Italy. But when we returned to the palace in the second act, new collages revealed voluptuous nudes. For the other scenes, we got dark stone walls.

Vita Tzykun’s costumes were strictly period, with the odd addition of Venetian Carnival masks for the courtiers (although the opera had its premiere in Venice, it is set in Mantua). Robert Wierzel’s lighting heightened the contrasts in the sets.

As in Jean-Pierre Ponnelle’s 1982 film version (available on DVD), this production has the effect of rendering the duke a one-dimensional ogre, his courtiers as thugs and the opera as a sort of gothic horror show. Any subtlety is lost with the exception of the role of Rigoletto, whose asides and soliloquies are delivered at the foot of the stage in front of a blood-red scrim. That said, it works rather well, as did Ponnelle’s. The latter had a vastly bigger budget, but this one made every cent count.

This is a production that keeps its focus, and ours, on Rigoletto’s point of view. At the end, Rigoletto is left cradling Gilda’s body (a doll) while Sierra sings her dying lines to him from behind the scrim, an odd but effective bit of theater.

The great Verdi baritone Sherrill Milnes was in the audience Saturday night. He sang the role of Rigoletto in the fabled 1985 recording with Joan Sutherland and Luciano Pavarotti under Richard Bonynge, perhaps the finest recording ever made of this opera.