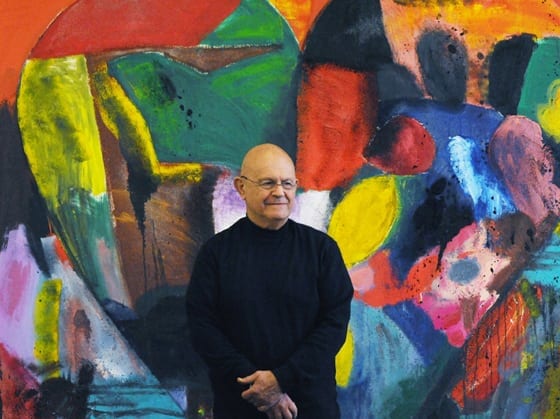 A painter’s painter, a printmaker’s printmaker and a reluctant icon of Pop Art, Jim Dine appears as singular as ever in Jim Dine 80 at Alan Avery Art Company through March 21.

As a young artist in the late 1950s and early ’60s, Dine experimented with happenings and assemblage, as well as traditional media, using everyday objects as material and subject. However, unlike his friends Claes Oldenburg, Robert Rauschenberg and Roy Lichtenstein, whose work launched American Pop Art in the early sixties, Dine appropriated objects and images with autobiographical significance as a vehicle for personal expression. He has continued to push the expressive limits of diverse media for more than 50 years.

Hearts feature in five of the 15 works in the show. In a 2010 interview Dine explained that hearts are templates for all of his emotions. Thick patches of cyan, yellow, orange and red mask the woodcut and etched outlines of a heart that struggles out of black shadow in Mad 4 (2014).  In contrast, flat strokes of brilliant red, green and yellow almost obscure the heart as they dance joyfully across the surface of P, C, T, BP (2003). In Summer VII (2014), the fullness of a crimson woodcut heart materializes through smoky charcoal sfumato, but cut and torn paper fragments on the surface emphasize its facture and thwart any illusionism. At the artist’s request, the woodcut P and DII (2002) is displayed unglazed, so that the complex textures of acrylic and enamel painting and charcoal drawing over the relief print of the heart are clearly visible. The heart motif belies the artist’s passionate embrace of his media.

Bathrobes as self-portraits have recurred in Dine’s art since 1964 when he appropriated the image from a newspaper. Four variations in the show demonstrate the artist’s deft manipulation of color, mark and medium to produce widely different effects, from restrained and orderly in J-P, Robe (2007) to playfully exuberant in O, B, R (2010). One woodcut of Pinocchio, W, B, M (2013), represents a motif Dine has pondered since seeing the Disney movie as a child, and explored artistically since the mid-1990s. As a boy Dine identified with the wooden boy whose lies got him into trouble. Now he identifies with Geppetto, who brings desire to life through his craft, and understands the story as a metaphor for art.  Dine’s Pinocchio is based on Carlo Collodi’s original tale, a much darker story than the Disney adaptation. In 2006 Dine published a portfolio of 36 lithographs that were used for a translation of the Collodi text published by Steidl.

Because Dine’s art-star status imparts an all-too-familiar quality to his riffs on recognizable motifs, it’s easy to overlook their subtle complexity. In B G H  (2010), one of his heart-themed pieces, for example, hand-painted splotches of black and gray stand out against the absolute flatness of the digital print, asserting its connection with the artist (despite its digital production) in a manner that recalls the handprints in Jackson Pollock’s Number 1A (1948).

Assembled in honor of the artist’s 80th birthday, Jim Dine 80 highlights the major concerns of his long and prolific career with a carefully chosen sampling that begs viewers to look beyond the familiar.