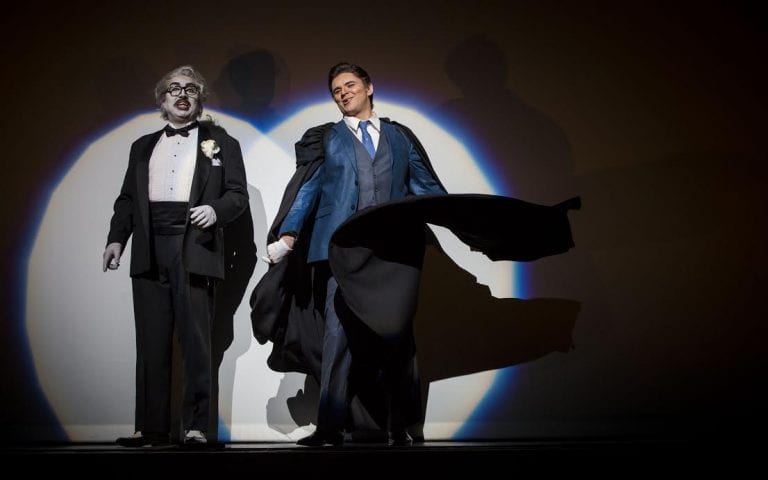 The Atlanta Opera version of Don Pasquale, with Burak Bilgili (left) in the title role and Alexey Lavrov as the treacherous Malatesta, is set in 1950s Hollywood. (Photos by Rafterman Photography/The Atlanta Opera.)

On Tuesday evening at the Cobb Energy Performing Arts Centre, the Atlanta Opera presented a performance of Don Pasquale, a comic opera by early 19th-century Italian composer Gaetano Donizetti. This marks the first time a production of Don Pasquale has ever been mounted by the Atlanta Opera. Two performances remain: Friday evening, March 31, and Sunday afternoon, April 2.

Although this is Atlanta Opera’s first foray with the vocally challenging bel canto comedy, this production is hardly a traditional period approach. Instead of being set in the aristocratic social milieu of early 19th-century Rome, Italy, stage director Chuck Hudson and his creative crew have placed the story in 1950s Hollywood, the “golden age” of motion pictures. The music is skillfully led by conductor Joseph Colaneri, music director of the Glimmerglass Festival, in his Atlanta Opera debut.

Turkish bass Burak Bilgili is cast as Don Pasquale, a wealthy Hollywood has-been, who was honored by the motion picture industry for his roles as a young lead actor in the silent-film era. But his career has slid into artistic gutter with a few failed B-grade sci-fi flicks and westerns. The opera’s overture accompanied a projected film sequence which pictures Pasquale at the height of his success, while subsequent film intermezzos between scenes chronicle his inelegant decline. Bilgili is a veteran of Atlanta Opera productions, and he plays the Don to the hilt in makeup that is as old and black-and-white as his character’s silent films.

Russian baritone Alexey Lavrov portrays Dr. Malatesta, the Don’s personal physician and friend, but also a close friend of Pasquale’s nephew, Ernesto, played by Korean tenor Ji-Min Park. The Don has set up an arranged marriage for Ernesto, but Ernesto is in love with a young widow, Norina, sung by American soprano Georgia Jarman. Malatesta has set up a ruse to thwart Pasquale’s overbearing plans.

Lavarov’s Doctor starts off as seemingly the most stable and reasonable (if conniving) of the bunch, but by the final act he has become sillier and part of the absurd folly and slapstick, clad in a cape that he spreads and flaps about in as if he were Bela Lugosi about to turn into a bat on screen.

As a clever cover for a scene change in the last act, Bilgili and Lavarov sing an encore from their duet “Cheti, cheti” in front of the main curtain, consciously playing to the audience in an almost Vaudevillian manner.

Park’s bright tenor voice adds a kind of whiny, spoiled rich kid flavor to Ernesto in the earlier scenes, when despairing about the choice between inheritance from Uncle Pasquale and his true love. But he becomes a more sympathetic romantic protagonist as the story wears on in the final act. Jarman’s Norina is a widow and actress, truly in love but also fully versed in the art of feminine allure. And when disguised as Sofrina, the Doctor’s imaginary sister, in the ruse to trick Pasquale into allowing Ernesto to marry whomever he wants, she shows she can play the all-out vixen.

Aside from these four principals, there was one minor sung role: a notary, played by bass-baritone Andrew Pardini, one of the Atlanta Opera’s intrepid studio artists. While in the original setting this role is of a public notary who can record and execute legal contracts, in this production he is a camera operator who is pulled into the ruse, disguised to play a fake notary to write and execute a fake license for the marriage of Pasquale to Sofrina (Norina in disguise).

The other nonspeaking role with extensive presence is that of Ian Christiansen as Max the Manservant — the Pasquale household’s stuffy majordomo, who is not a named character in the original opera but is so visibly prominent as pantomime that, of course, he must be given a name. Other nonspeaking, unnamed characters seem to intentionally threaten to upstage with a stylized physical presence — like a character in the background of a Robert Altman film who catches the eye despite foreground action and dialogue.

The chorus, which appears only in the final act, is used to portray party guests drawn from Hollywood’s elite film actors and actresses. Some are instantly recognizable, such as Groucho Marx, James Dean, Lucille Ball and Carmen Miranda; others less so. A few throw a curve-ball to audience members who are not so familiar with “golden age” films — like one chorister who appears to be Babe Ruth but upon reflection must represent William Bendix, who portrayed the baseball legend in the 1948 film The Babe Ruth Story. (The Great Bambino himself died within a month after that film’s release, so would not have been around for a 1950s party of stars and starlets.)

However, just as Pasquale became a washed-up actor with the end of silent film and the advent of “talkies,” one thought to ponder is how these Hollywood elites would face a similar sea-change with the increasing prominence of television. Some careers would survive the transition; others would not. It’s one more subtle subtext of this “Hollywood” version not present in Donizetti’s original.

One of the questions that has to be asked when an opera is “modernized” in this manner is: does it add something of value? In this case, it does. The story is essentially a situation comedy, and it plays as well set in 20th-century Hollywood as it does in 19th-century Rome, as well it should. Parallels to the story’s basic premise abound. One contemporary example is Arthur — the 1981 film starring Dudley Moore and Liza Minnelli — in which an arranged marriage and inheritance are also at odds with true love.

Don Pasquale is a simple comedy, fairly timeless in its appeal, which allows for plenty of laughter, slapstick and silliness. In the end, one can find a good degree of sympathy for all of the characters, despite their respective foibles and shortcomings. You can go home afterward with a happy heart.