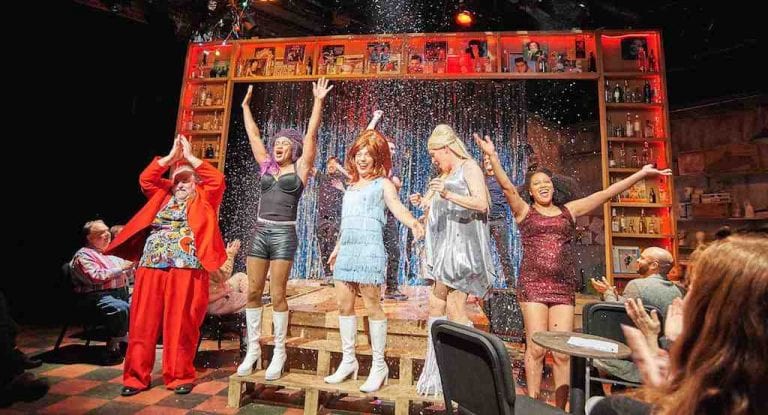 Review: “Georgia McBride” is short on substance but full of enjoyably empty calories

What’s a failing Elvis impersonator to do when times get tough? Ditch the jumpsuit, don a dress and lipsynch to “Stand by Your Man” in place of swiveling his hips to “Blue Suede Shoes,” of course.

That story pitch probably sounds pretty far-fetched but moderately funny, which is about how things play out in the production of The Legend of Georgia McBride on stage at Actor’s Express through April 16. In the show, Casey (Nick Arapoglou) is an Elvis tribute artist struggling to make a living working at a Panama City dive bar. He’s fired from his job by the bar’s bottom-line, no-nonsense manager Eddie (Al Stilo) just about the time his girlfriend Jo (Falashay Pearson) announces she’s pregnant.

His replacement, a wise-cracking drag queen named Miss Tracy Mills (Jeff McKerley), insists that Casey put on drag when her supporting act Rexy (Thandiwe Deshazor) is a no-show. To everyone’s surprise, Casey, newly christened as Georgia McBride, is a hit, and though he feels he has to hide his new occupation from his girlfriend, he can’t say no to drag when it pays the rent and buys onesies for the twins on the way.

The plot and the attendant gags of a “fish out of water” in drag are plainly derivative, copying the basic idea and structure of well-known comedies with a similar setup such as Tootsie and Mrs. Doubtfire, with bits of Priscilla, Queen of the Desert thrown in for good measure. Still, those are funny movies, and much of the humor that works there works here. And like several of those films, the show gets considerable drive, fun and energy from its soundtrack, which not only includes great songs by the King, but also classic tunes by Edith Piaf, Judy Garland, Tammy Wynette, Dolly Parton and more.

McKerley is a standout as the tough-as-nails, heart-of-gold drag queen Tracy. The actor nails the spirit and timing of many a caustic joke, and with each quip, the character seems to be hammering against the constraints life has handed her. (Strangely enough, a scripted meta-joke toward the end seems to indicate that she’s even hammering against the constraints of being placed in a mediocre comedy.)

The script is by Matthew Lopez, whose provocative, hard-hitting historical drama about a Jewish slave-owning family just after the Civil War, The Whipping Man, had a strong production at the Alliance in 2013. That show gave no indication that this inoffensive, nothing-burger of a comedy would be next out of his arsenal. If The Whipping Man had a fault, it was in its overly somber and didactic tone: after completing that script, perhaps the writer felt obligated to run as quickly as he could in the opposite direction.

Whatever the reason, Georgia McBride is the result. There’s not much to savor or even remember about the show. But still, many of its jokes, if derivative, evoke genuine laughs, and the production has an appealing, sparklingly sequined, uncomplicated heart. In the end, it makes for a passably fun, forget-your-troubles sort of evening for those — and considering the times, we are many — who find themselves in the mood for a little something that’s unashamed to be stupid, familiar, fluffy and silly.