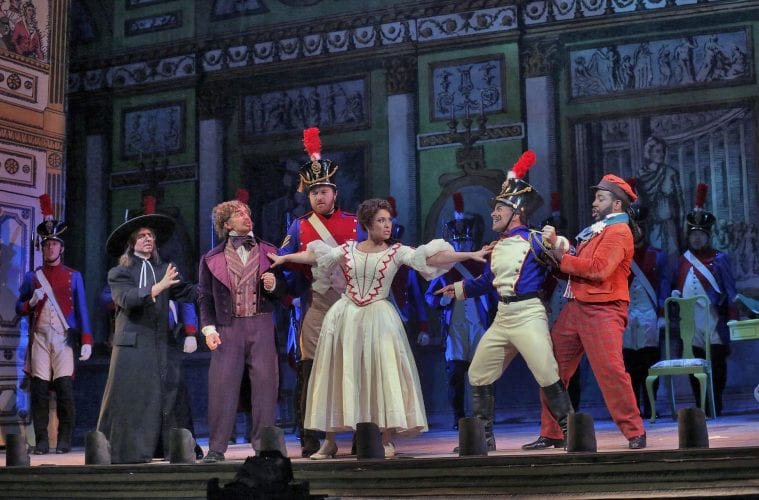 Review: The Atlanta Opera brings flair and fun to the delightful strains of “Barber of Seville” 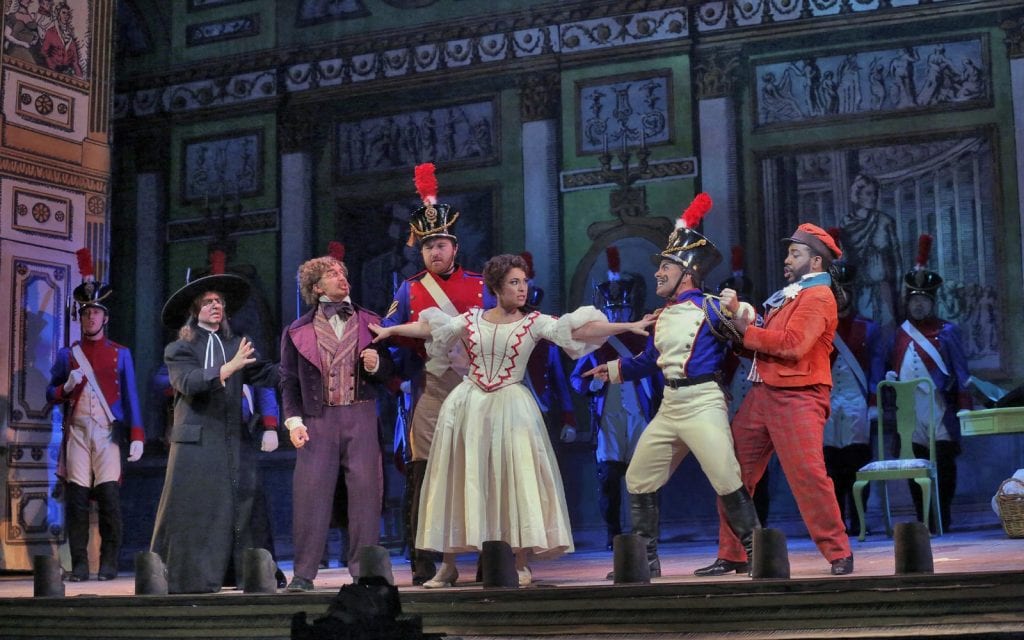 Irene Roberts as Rosina with Sidney Outlaw (in orange) as Figaro. (Photos by Ken Howard)

The Atlanta Opera opened its final production of the season, Gioachino Rossini’s “The Barber of Seville” on Saturday at the Cobb Energy Performing Arts Centre. Sung in Italian with projected English surtitles, the plot is simple: boy meets girl, love at first sight. Girl’s guardian gets in the way. Boy’s clever friend gets them together. Needless to say, it’s a comedy. Operabase ranks “The Barber of Seville” number seven among most-performed operas worldwide. Thus, it’s also a pretty safe box office bet.

What the audience sees upon entering is not a closed curtain, but the primary element of the set present throughout: a rectangular archway which in effect replaces the theater’s own proscenium, positioned slightly up the raked stage so the cast can enter and pass in front of it. It includes doors on its left and right inside walls, initially with a black backdrop behind the entire and a trio of chandeliers hanging low near the stage floor, their candles unlit.

As the opera’s “Sinfonia” (Overture) is performed by conductor Craig Kier and the orchestra, some of the story’s characters are introduced via silent acting. First to arrive is the title’s “barber” character, Figaro, played and sung by baritone Sidney Outlaw. Figaro points to each chandelier in turn and and their candles magically light. With a final gesture, they began to ascend to the top of the arch — reminiscent of how the low-hanging Austrian crystal chandeliers in the Metropolitan Opera House are raised to the ceiling prior to a performance.

Then a 16-foot-tall, 400-pound portrait of Rossini descends from the flies. Other principal characters appear, perusing the portrait as they go about the stage. It’s where the initial passing “boy meets girl” part takes place, which we later learn was at a museum. Playing it out silently, as the “Sinfonia” is performed, draws the audience in while Figaro’s manners make it clear that the singers are aware they are players on a stage. There is no pretense: the fourth wall is broken from the beginning by Figaro in preparation for comic romp. 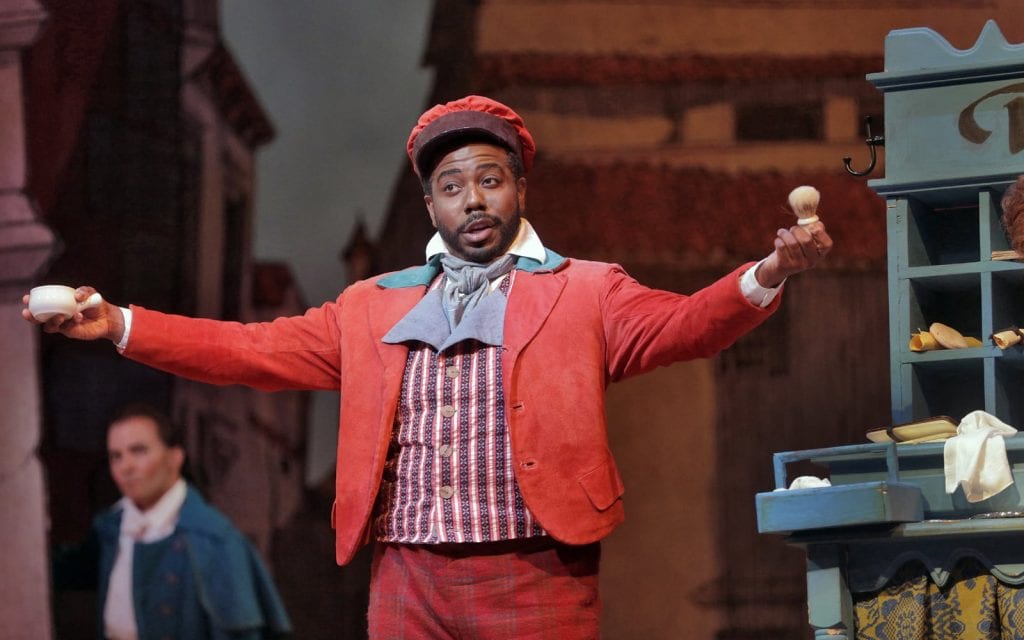 While the broad story itself is simple and can be played more heavily toward a love story, the comic devil is in the details, visual and verbal, and there are plenty. In this regard, José Maria Condemi’s stage direction helps bring it out. The scenery and props by Allen Moyer (rented from Minnesota Opera) and costumes (from Washington National Opera) are used to good leverage.

This cast works well as an ensemble. Happily, there is is a reasonable feeling of equanimity among singers according to the size and needs of their roles. Except for one small role, the credited cast of vocalists are all making their Atlanta Opera debuts.

Outlaw’s perpetually grinning Figaro is established as the clever servant, the trickster with a good heart in his confident “Largo al factotum della città.” He aids his former employer, Count Almaviva (tenor Javier Abreu), who is the lovesick lead disguised as a poor student (“Ecco, ridente in cielo”), but also takes on two comic disguised roles, as a soldier an an apprentice music teacher — the latter the far more engaging, if sillier — in the pursuit of Rosina.

Rosina (mezzo-soprano Irene Roberts) is an ingénue with a twist, Figaro’s equal in cleverness and deception, though also essentially good-hearted. Rosina’s “Una voce poco fa” is the showpiece for Roberts.

Almaviva’s servant Fiorello (bass Cory Neal Schanz) is most prominent in the opening scene, herding a rag-tag orchestra of freelance musicians (portrayed by the chorus) that accompanies the Count’s predawn serenade beneath Rosina’s window.

Soprano Kelly Glyptis, as Berta, the pipe-smoking governess of the Bartolo household, got her spotlight in Act II, in the sometimes-omitted aria “Il vecchiotto cerca moglie,” where she drew forth much empathy for a character that otherwise could have too easily been left a purely comic accessory.

The only credited singer not making an AO debut was chorus member C. Augustus Godbee, who came across appropriately flustered in his bit role as the Police Sergeant.

The “chaos” ensemble finale of Act I is by far the most unusual scene in the entire opera, combining the surrealism of an early Max Fleischer cartoon with the awkward plot resolution of a Dick Tracy comic sequence. During the hubbub, the portrait of Rossini descends again but hangs askew, while a scale model of the set’s archway descends from the flies as well, tilted the other direction. The characters downstage begin to pass props to each other, handling them in curious ways such as swinging a violin like a tennis racquet. Few props escape the controlled anarchy, including a lime-green cello.

The second act is far more straightforward in its staging, but still allows some room for suspension of disbelief. Everyone, even the bad guys, are ultimately participants in a happy ending. Nobody dies. Not only that, nobody stabs themselves then sings for an extended time before dying.

If you are unfamiliar with opera, “The Barber of Seville” is an entertaining first experience. If you’re a seasoned opera nerd, you will definitely catch most of the inside jokes and have a lot of fun with this “Barber” production.