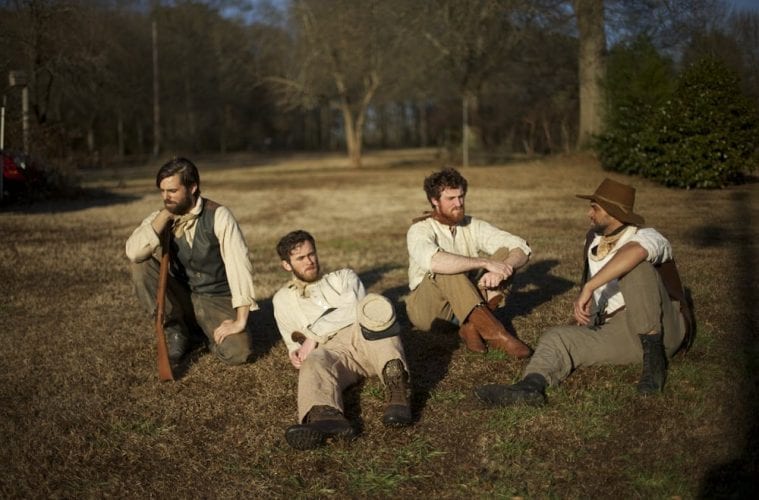 Terminus, the inventive new production from independent theater company Saiah, running at Decatur’s Clyde Shepherd Nature Preserve through May 17, is really three shows in one. Viewers are invited to choose one of three paths to follow the characters through the immersive setting of the park, with the various paths ranging from moderate to challenging (the easiest involves a short walk of 100 feet over even ground, and the most challenging is closer to half a mile and even involves some running).

It’s a Civil War story, but the characters and events of Terminus were inspired by Richard Adams’ classic novel Watership Down. The rabbits in search of a safe habitat here become a band of Confederate deserters trying to find their way home in the last days of the war.

Site-specific theater works don’t always fit their settings, but the tight-knit cluster of convergent stories in Terminus is wonderfully suited to a nonproscenium production. For the most part, the audience moves from scene to scene, but especially fine are the moments when the audience is moving and the action moves along with them, a difficult thing to coordinate but smartly done here.

On my first night at the show, there was a fantastic little moment when, on one of the paths, I carefully walked around a puddle, and an actor playing a Civil War soldier in knee-high boots strode right past me and through it: such a moment could never even be attempted in a conventional theater.

An intermission, more of an interlude really as the characters don’t stop performing but just sit quietly by a campfire, had a lovely, langorous and haunting quality. Food — ostensibly like that the characters are eating — is served to audience members. I found the dishes strange, tasty (but not delicious) and in the end very intriguing as a concept.

Given the scale of the story, the actors must be remarkably invested in their characters or risk losing the verisimilitude and immersive goals of the show. The cast brought to their parts a feel for the authentic emotional lives and circumstances of their characters. Terminus is about the Civil War but peopled with characters who could be the inhabitants of any war. The play shows the war pulling in its wake very particular sons, brothers, mothers, fathers, wives, husbands and soldiers. All of it feels plot-related rather than diversionary or just for pacing out of the multiple stories as they unfold.

The migrating nature of the production, along with the inspiration from Watership Down, are two of the most salient elements of the show, but considering the portions I saw (I’ve walked two of the paths so far and plan to return to see the third), I was surprised to find I was most compelled by the story with the least movement, the story that also had the least to do with the original source. In the “Homesteaders’ Path,” we follow the story of the women left behind during the war, and I found in their story more intimacy and focus than I did in the “Deserters’ Path,” which follows the soldiers on their journey home. The deserters’ story is a challenging one to tell. We’re in a naturalistic environment, but the primary motivating impetus that sets the story in motion, Fiver’s vision, is supernatural.

We also must imaginatively accept leaps in time. I found it strangely challenging in an outdoor setting (in a theater, the lights go down, and when they come up, we accept that time has passed). And though we’re following the characters on their journey through real space, we’re meant to understand that their journey is much, much longer and harder than ours, again a leap I found challenging.

With its many characters, multiple storylines and all the movement, personal details have to be fleet; there’s a surprisingly heavy reliance on interior monologues, voice-overs from hidden speakers, letter writing or reading, when what I wanted to see was more live interaction between the characters.

Perhaps the interior focus purposefully evokes emotional lives that would never have been as public as in our time, as well as reflecting the outlook of poor, rural people of few spoken words. Likewise, the three separate paths highlight the lack of real-time updates between the characters, bringing to the fore the existential problems with time and distance in wartime. There is no one vantage point where anyone — character or audience member — can take in all of Terminus.

I’m still a big fan of the proscenium stage, but it’s not an “either/or” for me. The trend of immersive theater in Atlanta adds a fascinating “and” to the options in the city, with Saiah among its most daring, inventive and productive proponents.