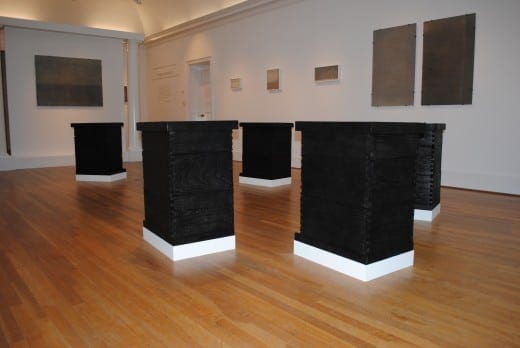 Morgan Alexander: where have they gone, where are they going?,
charred cypress wood. (Photo courtesy Swan Coach House Gallery)

Morgan Alexander is the 2013–14 recipient of the Forward Arts Foundation’s Emerging Artist Award. His exhibition remembering, forgetting, and remembering again, at the Swan Coach House Gallery through May 30, proves why he justly deserves the honor.

Alexander brings a Japanese aesthetic to a Southerner’s respect for family and love of the land, joined with an Eastern influence in thought and practice. He creates shrines to things that once were while making something completely new.

He imbues his drawing, construction, installation and sculpture, made with salt, honey, found wood and other materials from nature, with a sense of memory and loss that is never nostalgic, just as the thing itself never seems of the past, but simply changed and newly arrived in the present. An elegance and restraint suffuses his work and calls to mind the Japanese term wabi-sabi, finding beauty in the imperfection of natural objects and processes and value in these subtle, simple and elegant objects in a world where nothing is permanent and nothing is finished.

Alexander is interested in beekeeping and is disturbed by the modern phenomenon of colony collapse disorder, the term applied to the decimation of today’s bee population as huge numbers of honeybees are disappearing from their hives without obvious explanation. He allies himself with the ideas of scientist and philosopher Rudolf Steiner, whose quote provides wall text and who, in 1923, urged a metaphysical appreciation of the wisdom of the hive. Steiner anticipated this modern demise if destructive agricultural practices of the day were allowed to continue. “Nature sometimes talks to us in a very understandable manner. You will notice what it says if you can take simple things simply enough.”

Alexander takes simple things and, quite simply, makes them beautiful. He delivers this profound simplicity in the five beehive-like structures that occupy the center of the room. He made them from cypress blackened by the traditional Japanese practice of shou-sugi-ban. This practice of charring wood to protect it from insects and fire makes manifest the idea of duality that is a recurring theme for the artist: burning to save and protect.

The blackness of the structures in where have they gone? where are they going? makes their presence even more profound, but it also makes them mere shadows of the real thing. They occupy the room with simultaneous there-ness and not there-ness — vessels for the duality that Alexander attempts to understand in his work. They possess both emptiness and presence, what was once and what remains, and make us rethink the idea of absolutes.

The artist connected with a beekeeper in North Carolina who was nearing the end of his life and letting go of decades-old beehives in which he and the bees had cultivated the honey that was his livelihood for so many years. Alexander valued their history and their simple beauty as material objects, noting their weathered coats of paint, the scrimshaw left by decades of burrowing bees and the residue of propolis, or bee glue, still there along the slats. Morgan Alexander: no title — are these the voices of our departed, or is it just the gramophone? #11;
reclaimed beehives, glass, wood and paint. (Photo courtesy Swan Coach House Gallery)

Alexander honored the collaboration over time of seemingly disparate things with his series titled no title — are these the voices of our departed, or is it just the gramophone? Noting that trees had become the wood that was used to build the hives, which were then touched by bees, people, honey and time itself before at last it all came to him, Alexander employed a keen sense of composition to make something new from what was. He selected and cut from the hive sections he brought back, but he changed nothing from those sections except their placement within a composition that he calls drawing.

With the etched glass he created to cover his compositions, he elevated the material beyond found object assemblage and the nostalgia of the beautiful surfaces, and added his own voice to its history. The glass serves, intentionally or not, to create a distance that mutes the material just as time separates us from the past. His constructions become mute evocations of the past. Memory, place and loss dwell behind scrims of glass in seeming shades of pale gray, sea-glass green or milky alabaster. Joseph Cornell knew the power of this remove, and so does Morgan Alexander. Something abides in the material behind the glass, but it is held back, unreachable by us, as ineffable as a poem.

There are landscape references if you are inclined that way. I am, and in a pairing of a rust-red piece with a cloud-white piece, I saw red clay ground beneath a sky leached by summer heat of all its color. In other work, Alexander calls upon his “drawings” to explore the idea of tokonoma — the Japanese term for an alcove where objects are placed for artistic contemplation. In such places, the shadows of the objects — of porcelain figures, or bonsai or arranged flowers — are as important to the composition as the object itself. His constructed drawings in three parts and in two parts call upon this shadow/form idea. In others, he uses lead, steel and glass on panel to achieve the same effect of depth and shadow. Some are portraits of emptiness, and others give the impression of a steel-gray sea against a pale sky. Coming full circle, we arrive at the installation that greeted us at the entrance to the gallery. Tiny domes of molded salt atop metal pins gather in clusters and clumps like so many pushpins on a population distribution map and call to mind the tracking of movement over time. Alexander hoped to create something to resonate in a kind of dialogue with the hives. The work is titled installation drawing (population) and conjures concrete images of migration and population density. But these markers are made of salt, a substance that Alexander uses to evoke the very essence of our humanity, of our fleeting human bodies. The ethereal whiteness of the salt can also signal an emptiness or absence as much as a presence. Duality again. Shadows on the wall created by the individual elements of the installation remind us of the appreciation of the shadow in tokonoma. Salt is collected here perhaps just as bees collect pollen. A gathering that moves with them as they move, or as they once moved before their decline. Memento mori.

Morgan Alexander gives new life to old materials, and makes much of the duality in the one: the non-duality. Remembering/forgetting. This/that. Is/isn’t. Beauty/. . . In this show, it’s all there, but only beauty is without paradox. After three visits to remembering, forgetting, and remembering again, I find myself remembering the work, and then remembering again, but I cannot forget the lessons to be found its profound beauty.