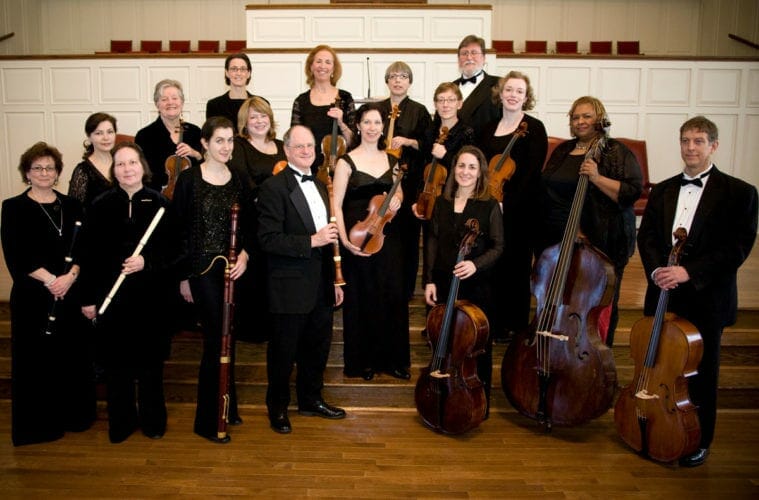 Review: Atlanta Baroque Orchestra plays moving and potent “A Night at the Opera”

Bliss from the Atlanta Baroque Orchestra. Two essential composers — one famous but still underappreciated, George Frideric Handel; the other sorely neglected, Jean-Philippe Rameau — were the focus Friday evening for an atypical concert at the Cathedral of St. Philip, billed as “A Night at the Opera.”

Handel and Rameau, born a few years apart, took different approaches to their art — in part attuned to shifting society and the politics around them.

Their operas dominated their respective scenes, then fell mostly out of the repertoire for a couple of centuries. But the power of this Atlanta Baroque Orchestra concert — just the music, no theatrics — showed what we’re missing. (Only the Bach bros fanatics, who see their guy as The One and Only, could object to this savvy programming.)

Handel was artistically conservative in capitalist London, entrenched in his own hot-blooded version of a style called opera seria. These dramas were often based on mythology or historical epics, and were sung in Italian for English audiences. (With cutthroat competition and changing cultural ideals, Handel’s opera company eventually fell into bankruptcy; he later shifted gears toward English-language oratorio, including Messiah.) At each step, though, he was trying to lock traditions in place.

Led by Artistic Director Julie Andrijeski, playing the violin as concertmaster, the group performed instrumental and vocal excerpts of two Handel operas from the 1720s: Rodelinda and Tamerlano. The plots are subtle and deeply sympathetic to the foibles of the human heart — a mix of love, power, betrayal and death. Alas, they’re also too dense to neatly summarize. In both these operas, the hero was originally played by a superstar castrato named Senesino. Unmanned before his voice broke, he sang in the alto range of a woman but with the full lungs and power of a man. We can hardly imagine what this sounded like, although we know it drove listeners to a frenzy. In an exchange of letters in 1723, John Gay (The Beggar’s Opera) wrote to Jonathan Swift (Gulliver’s Travels) that, in London, “Senesino is daily voted to be the greatest man that ever lived.”

The closest approximation today is the countertenor voice, and here Nathan Medley sang “Vivo, Tiranno” (from Rodelinda) and three arias from Tamerlano with panache and lovely tone. In “Benché mi sprezzi,” anguished that his lover believes that he’s betrayed her, Medley floated the final syllables effortlessly, and they hung in the cathedral’s resonant acoustic, so moving, so potent.

As an encore, Medley and Stegall returned for a duet from Tamerlano, “Vivo in te,” their lines gorgeously overlapping, backed by the rich, saturated harmonies from the orchestra. It was heady stuff.

The evening’s other marquee composer, Rameau, opposite to Handel, was progressive in music and cultural causes. A dominant force in monarchist Paris, he was linked with the great Enlightenment thinkers in the decades before the bloody French Revolution. In the thick of the action, he set music to Voltaire’s librettos, and was also attacked by Jean-Jacques Rousseau. Through opera, Rameau kept pushing society forward.

The concert’s entire second half drew from just one Rameau opera, Castor et Pollux. Unusual then as now, the opera is about fraternal love — the loyalty and sacrifice between twins who are born to the same mother but different fathers, one mortal, the other a god. As was the fashion, Rameau’s operas are a tight fusion of singing and dance in about equal measures, and both can advance (or comment on) the drama.

Thus we heard two colorful arias and a half-dozen ballet numbers. Rameau’s dance music is uncommonly zesty and ear-catching and soulful. String several of these numbers together and you’re dazzled by the invention and the exceptionally wide emotional range.

Stegall was at his best in the nostalgic and ethereal “Séjour de l’éternelle paix,” his piercing high tenor and lyrical, slightly aloof phrasing felt just right.

Between the operatic excerpts came music of the season: “Winter” from Vivaldi’s ubiquitous The Four Seasons. (On a more routine program, this would have been billed as the headliner.) Evan Few, a violinist in the Atlanta Baroque Orchestra, stepped out from the ensemble to play the solo. Wonderfully, that’s what it sounded like: instead of a brawny-toned touring virtuoso as the star, often at odds with the backing band, Few played it as among friends — his approach and warm tone ideally matched with his partners.