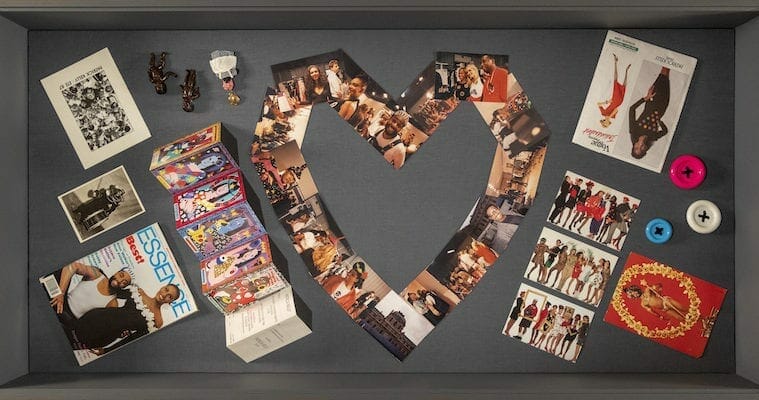 This selection of memorabilia from fashion designer Patrick Kelly is part of "The Journey" at SCAD FASH. You can see Kelly, who died in 1990, on the Essence magazine cover (at left) and at the peak (center) of the photo-collaged heart.

SCAD FASH is taking a new approach in its first exhibition of 2020: showcasing an artist’s work about a designer, rather than the designer’s portfolio itself. The exhibit Derrick Adams: Patrick Kelly, the Journey continues through July 19 and features artwork by the Brooklyn-based Adams inspired by the fashion designer Kelly (1954–1990). Both invested in exploring black culture, and Adams has created a biographical reflection of Kelly’s fashion sense. Kelly worked as a tailor in Atlanta in the 1970s, and Atlantans may know the Brooklyn-based Adams from his collaborative performance work with SCAD students. Alexandra Sachs, SCAD FASH executive director, curated the show and will speak about it at noon February 20. Adams will be in conversation with writer/critic Antwaun Sargent at SCADshow on February 20 for deFINE Art 2020. Other talks and programs are in the works. For updates, go HERE. Sachs recently shared some thoughts on the months-long exhibition.

ArtsATL: How did you first encounter Adams’ work? Were you already aware of Kelly’s fashions?

Alexandra Sachs: In 2017, SCAD Museum of Art commissioned a new work by Derrick — a performance with SCAD students. The piece brought Jacob Lawrence’s painting The Builders (1947) to life onstage. I was intrigued by the way Derrick works, his multilayered approach incorporating sound elements, and the agency he placed in the students/collaborators.

I was aware of Kelly’s importance as the first American admitted to the Chambre Syndicale du Prêt-à-Porter but knew very little about his connection to the South and his time in Atlanta. The exhibition afforded an opportunity to learn more. It’s important that we select and curate exhibitions featuring global leaders in fashion, design and film whose works can serve as educational resources for our students, in addition to the Atlanta community and beyond.

ArtsATL: Why not display Kelly’s designs themselves? How does relying on Adams for an understanding of Kelly enrich a viewer’s perspective?

Sachs: This exhibition provides a perspective not often shown in exhibitions — that of an artist looking at fashion as a subject for his work. Derrick felt an affinity for Patrick as an artist, not just as a fashion designer. They share a similar formalist quality and infuse social context into their work. Derrick undertook a lengthy research period to delve into the Kelly archive, which contained a trove of correspondence, sketches, swatches, photographs and other memorabilia, including a proposal for a book about Kelly’s life by poet Maya Angelou. Derrick adopted the title of her proposal, The Journey, as the name for the exhibition. There have been several major retrospectives of Kelly, but we are delighted to present a new story, a new perspective on Kelly’s legacy. ArtsATL: Is this exhibition meant to provide a deep dive into Kelly as a person and a designer or does it equally convey the personality of Adams as an artist?

Sachs: The underlying structure of Derrick’s collages and sculptures are vintage Kelly Paris patterns produced by Vogue in 1988–1989. Onto those vintage patterns the artist has applied acrylic paint inspired by Kelly’s color palette and pattern pieces similar to the fabric swatches he saw in the archives. Equally important are the areas on the collages that are left uncovered — the printed instructions, cut lines, size guides. Derrick mentioned how it was important to keep that part visible. He liked the instructional quality of the pattern. This is a great metaphor for his work and this show. The inclusion of Patrick’s vintage garments and archival materials convey much about who he was. Visitors who take time to notice details in the collages and sculptures will learn a lot about Adams. ArtsATL: This Adams’ work was originally shown in 2017 in Harlem. Is this same work or are there significant differences?

Sachs: This is entirely new. The selection of Derrick’s collages, sculptural works and wall mural were made in collaboration with the artist and SCAD FASH. We added a large-scale wall mural and a collage from Derrick’s Ebony Fashion Fair series. And we were able to include vintage garments that speak directly to Derrick’s work. In addition, [it features] a personal archive of Kelly’s letters, announcements cards, photographs and newspaper clippings collected since the 1970s. The significant difference is that the visitor will be able to see Patrick’s garments alongside Derrick’s work.

ArtsATL: To what extent might SCAD FASH visitors see themselves or their city reflected in this exhibition?

Sachs: Patrick’s ties to the South and Atlanta had been an important aspect of the presentation at SCAD FASH from the onset. His childhood in Vicksburg, Mississippi, formed his design aesthetic and the way he presented himself —  always in oversized denim overalls. We learned that one of his first jobs here was working at an AmVets thrift store, sorting through donated clothing and repurposing it in his style. On exhibit is a hand-cut tube dress with self-bows from the 1970s. We also have a Polaroid photo of Patrick at Ansley Mall. Once Patrick gained success in Paris, he triumphantly returned to Atlanta in 1988 for a runway show of his collections. We have a copy of that show playing on a monitor.