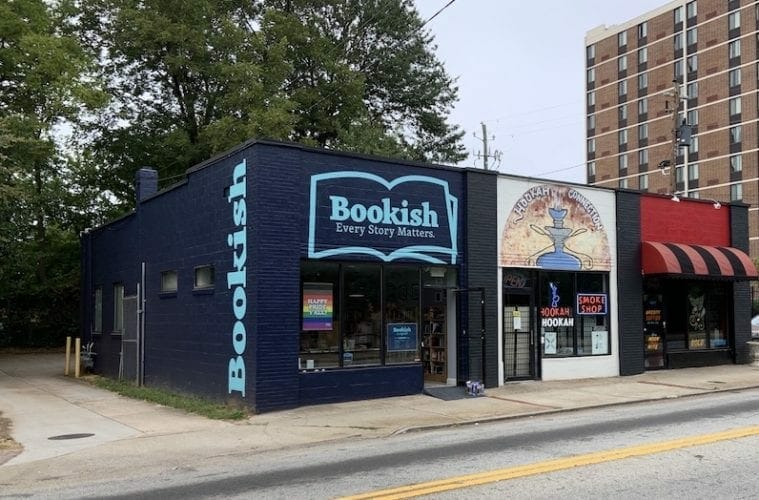 Kendra Lee opened Bookish to fill a void for a bookstore in East Atlanta Village. (Photo by Beth Ward)

Kendra Lee’s new used bookstore, Bookish, is hard to miss. Located on Glenwood in the heart of East Atlanta Village, the little blue shop pops against nearby brown apartment buildings and gray auto shops. It’s a cheerful addition to an already  eclectic neighborhood, and a little literary beacon for a community that’s been missing Bound to Read Books since it closed in 2015.

“I’m so glad y’all are in the neighborhood,” says one man who stops in on a chilly Thursday morning.

“It’s so great you’re here,” says a woman who wanders in looking for a book for her son. She chats with Lee about teaching him to read before the conversation segues into the renovations at the nearby library. 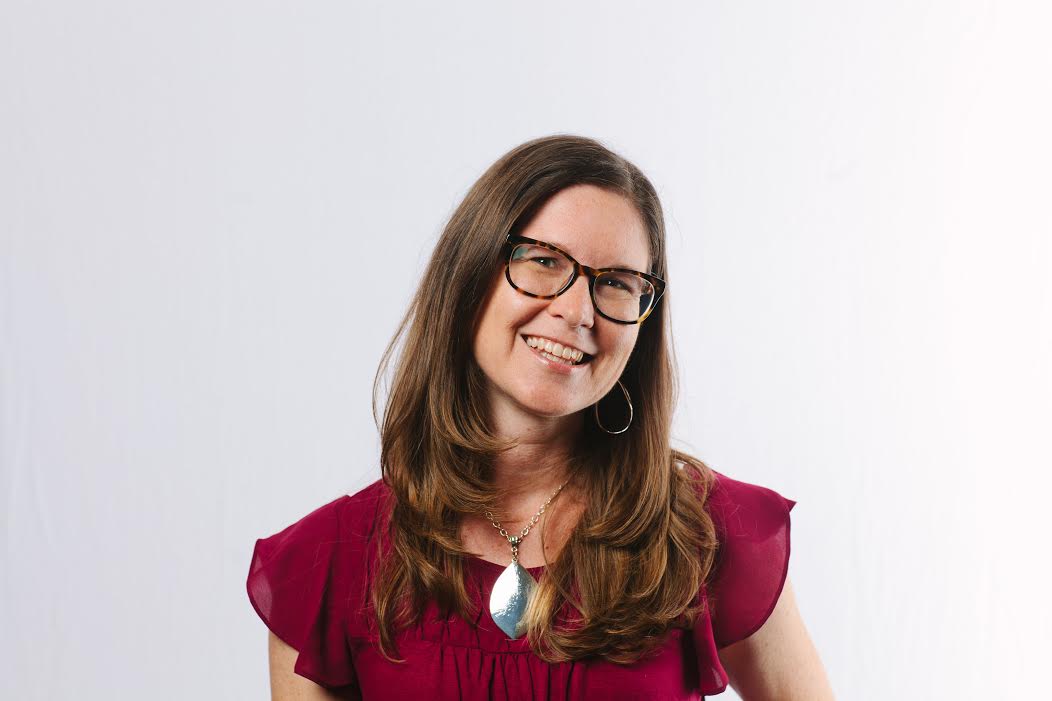 Kendra Lee opened Bookish because she saw the need for a neighborhood bookstore and literary gathering spot.

You’d have thought they’d known each other for years rather than meeting 10 minutes earlier. That’s the magic of a bookshop, and Lee’s welcoming personality.

She and her partner had just moved to East Atlanta “and were kind of getting a feel for the neighborhood,” she says, before she began thinking seriously about opening a retail space. “We’d already been in Atlanta for two years, and we knew this is where we wanted to put down roots, so I knew if I opened a bookstore, I wanted it to be here.”

Lee isn’t a bookseller by trade. She came to Atlanta from the Panhandle, where she’d taught writing at the University of South Florida. It was at an East Atlanta Scholastic Book Fair that the seed for Bookish was planted.

“I worked at the Scholastic Book Fair at my daughter’s school and that was an incredible amount of fun,” she says. “Helping kids find books that they wanted to read instead of books they thought they had to read was really exciting.”

Flash forward to an afternoon months later at Joe’s Coffee.

“I was working, and I had finished and wanted to be able to walk to a bookstore, and there was nowhere to walk to,” she says. “And so I started asking around and [found out] that there had been one in the village for 10 years. It had closed and people were still actively lamenting the loss. It became obvious very quickly that it was something people wanted.”

Bookish is Lee’s successful attempt to fill EAV’s literary void and create a community space where people can come and talk about books, sit down and share stories and get to know their neighbors. And it’s clear almost as soon as you walk in that as many customers come to chat with Lee about their lives as they do to find new books and peruse the shelves. She greets every customer as if they were an old friend, making each feel seen and welcome. 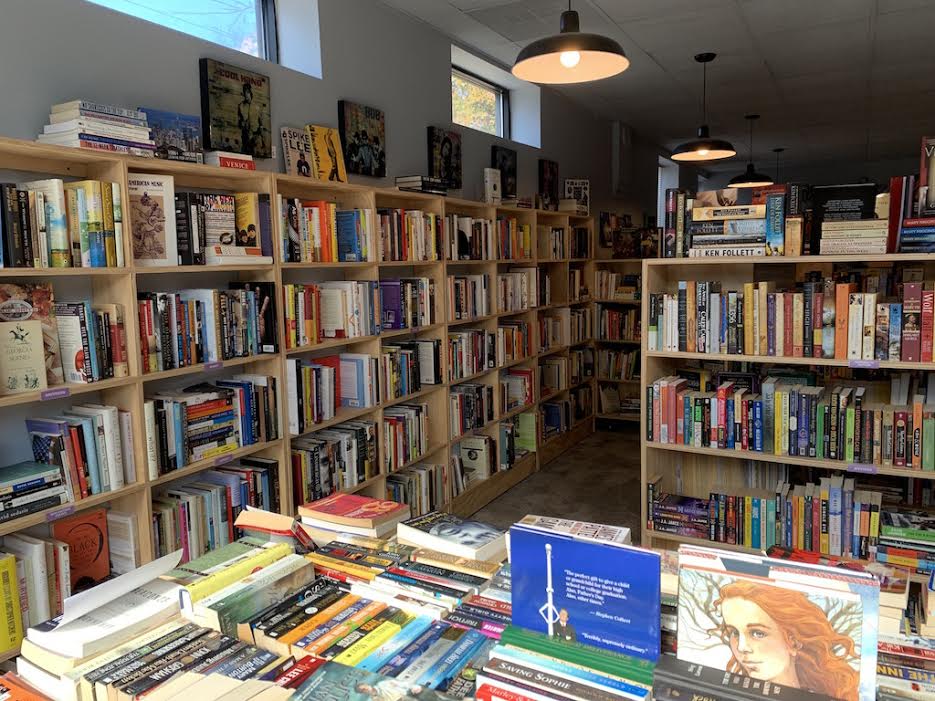 Bookish has a cozy, welcoming atmosphere where customers are encouraged to linger and chat. (Photo by Beth Ward)

Aside from creating an inviting space, it’s also a priority of Lee’s to ensure that when customers come in to her shop that they’re able to see themselves reflected in the books she sells, regardless of background, gender identity or ethnicity.

As a primarily used bookstore — though Bookish does stock newer titles — Lee works diligently to curate her selections based on feedback from customers. This again speaks to her willingness to have one-on-one conversations with everyone who stops in. It’s also this level of attention that makes Bookish feel so much like a gathering place alreadyeven thought it’s only been open for three months. Lee isn’t just selling people books. She’s trying to learn what books speak to them. The stories people seek out reveal a lot about the kind of people they are. Lee wants to hear those stories as a way to better serve the community.

“People come in and talk to me about the books,” she says. “It means something to them, and it’s really moving when someone talks to you about a book that has made an impact in their lives, or that they were blown away by.”

Like many of Atlanta’s other independent bookstores, Bookish hosts several book clubs, but the store also hosts events such as an Indigenous Authors Reading for Thanksgiving, and an Edgar Allen Poe Reading for Halloween. Bookish hosted a Cookbook Cook-Off in early November and added pumpkin carving as part of a children’s story time in October. 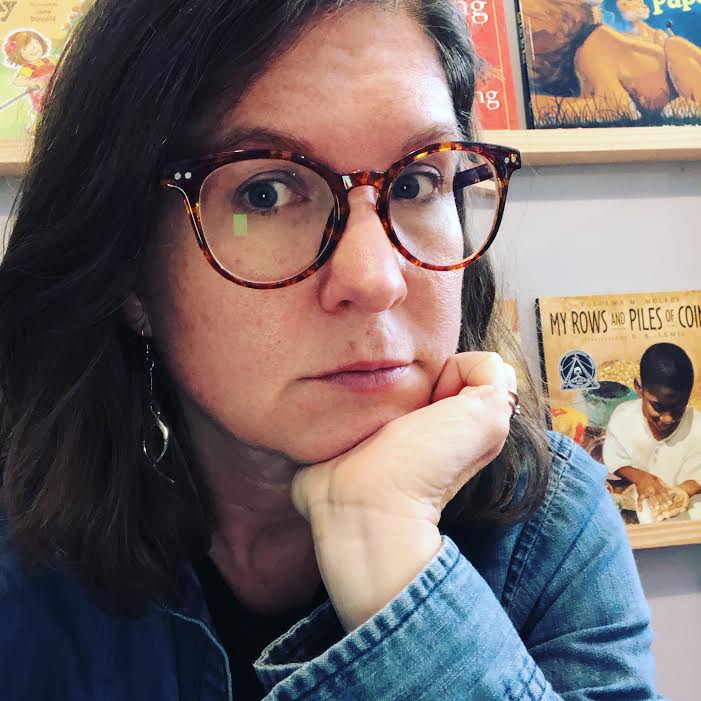 Owner Kendra Lee thinks an essential part of a successful bookshop is to be comfortable and accessible.

Perhaps uniquely though, Lee plans to create writing groups early next year. While Atlanta is lucky enough to be home to several incredible independent bookstores that all offer great author talks and book signings, it’s a bit harder to find accessible writing groups that aren’t intimidating to beginners or  cost-prohibitive. Lee hopes Bookish can help remedy that. It fits in with the store’s motto — “Every Story Matters” — and Lee believes that means the books she carries and the people who read them.

“I’m a writer, and I know that it’s great to write independently, but in order to move to the next level, you have to have feedback,” she says. “It’s important to me that it be in a setting that feels comfortable and accessible.”

“Comfortable and accessible” is essentially the Bookish ethos.

“I want people to feel like they can just wander in,” says Lee. “If there’s a poetry reading going on they can just come in and sit down. I don’t want things to be formal.”

Boxes parked by the cash register overflow with books still waiting to be unpacked. Poofy ottomans sit tucked into corners. Chairs near the children’s section are decorated with board books. Local art hangs along the walls.

Customers wander in and Lee greets them with a familiar smile.