For a century and a half, a handful of Russian classical ballets have been staged, restaged, reworked and reimagined. A testament to the staying power of aristocratic opulence and escapism on a grand scale, these are the ballets that continue to define ballet in our collective conscious: tutus, palaces, toys coming to life, innocent (if precocious) girls falling in love, “street” women stirring up mischief, strong men doing the lifting.

Originally choreographed in 1869 by Marius Petipa and souped-up by Alexander Gorsky in 1900, Don Quixote is one of these for good reason. With its virtuosic dancing, straightforward plotline and ample comic relief, this lighthearted ballet is a gateway to the more serious stuff. Even ballet-phobes, fearful of cryptic miming and drawn out party scenes, will perk up at the impressive display of technical prowess and human stamina. And Atlanta Ballet’s version, choreographed in the style of the original by Yuri Possokhov for the Joffrey Ballet in 2011, hits those marks despite a second act that fizzles. The two-week run continues this weekend with performances Friday and Saturday evenings.

Premiering to a nearly full house at the Cobb Energy Center last Friday, Possokhov’s Don Quixote features the stunning Erica Alvarado, fresh from City Ballet of San Diego and a reason alone to see the performance. As Kitri, Alvarado explodes onto the stage and draws all eyes from the moment she begins a series of effortlessly buoyant leaps. In another section, Alvarado travels down a line of cape-waving toreadors, executing pirouette after pirouette in time with Ludwig Minkus’s deceptively fast score. 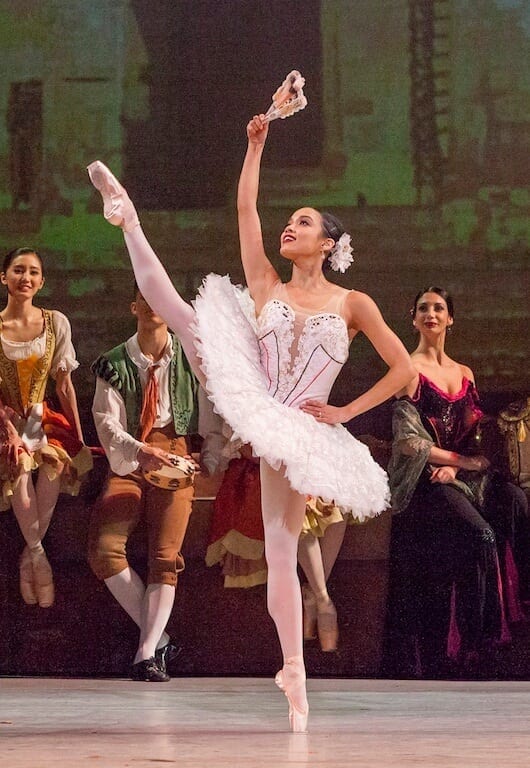 Kitri’s love interest Basilio, danced by newcomer Sergio Masero-Olarte, is also an impressive soloist, but together they falter. I cringed as time and time again, their assisted turns and precarious lifts wobbled. Each time Masero-Olarte supported Alvarado in a balance, the muscles in their arms shook with strain. As soloists, they shined on opening night; as partners, they held on for dear life.

Espada and Mercedes, the other lead couple danced by Alexandre Barros and Francesca Loi, respectively, have a stronger chemistry perhaps because their relationship doesn’t rely as heavily on partnering. These two embody a narrow definition of Spanish flamboyance: all swagger and sexual energy with, of course, a reference to Espada’s wandering eyes. But Loi plays this character like a boss, not a doormat. In the evening’s most thrilling section, she wields her black fan like a knife, snapping it as she glides to the rattlesnake sounds of shaking tambourines. Barros and the toreadors swing their capes majestically, but it is Loi who commands the stage with a smug demeanor I found more appealing than arrogant.

Atlanta Ballet veterans Jacob Bush, as the clueless aristocrat Gamache, and Jared Tan, as Sancho Panza, Don Quixote’s bumbling sidekick, are hilarious. Both excel in the art of physical comedy with exaggerated falls and expressive faces that drew peals of laughter from the audience on opening night. In her debut season, Airi Igarashi is a breath of fresh air as Amore, a winged Dryad who flies, literally and figuratively, across the stage with captivating lightness and speed.

Veteran guest artist Nathan Griswold plays Don Quixote with dramatic clarity, always wide-eyed and floating, lost in his own delusions. But the work’s structure, which favors lengthy solos and crisply symmetrical group sections, doesn’t allow us enough time to develop compassion for him. In a scene in Act II, the Dryads — an army of tiny, technically gifted women in white tutus — spin and dart past him as he gapes in awe. It’s impossible not to see the scene as both pathetic and predatory: an old man mourning his inability to be with (or touch) these women while ogling their physical beauty.

Act I grounds the work with a fast-paced storyline, hilarious characters and some beautifully executed dancing. But Possokov’s Don Quixote lacks dramatic continuity, and after Don Quixote’s dream sequence in Act II, the plot drifts away, replaced by a series of gratuitous solos and duets, every one of them ending with a flamenco-like wrist flick. A solo danced by the flawless Jackie Nash provides a notable respite from the showcase-like sameness of Act II, but her character — one of Kitri’s friends — does little to drive the plot. And Possokov’s choreography, though fast and challenging, does little to modernize the classic. He leaves that work to his design team.

Possokhov’s Don Quixote combines traditional sets — bedrooms, balconies, taverns and inns — with gorgeous, line-etched illustrations projected, dreamlike and multilayered, throughout the evening. Designed by Wendall K. Harrington, the projections place the production squarely in the 21st century but also clash with the work’s classic structure, choreography and costumes. As does Don Quixote’s faithful horse Rocinante, a ragged and dazzling life-size puppet (designed by Cynthia Von Orthal) that looks as if it stepped out, on four silver human legs, of a Maurice Sendak book.

In fact, the production’s design elements, which were inspired by Gustave Dore, the French artist who famously illustrated Miguel de Cervantes’ 1615 novel Don Quixote, lend emotional weight to a story that quite literally dances around Don Quixote’s heartbreaking descent into madness. The juxtaposition between Don Quixote’s fantasy and everyone else’s reality is, as it should be, stark. But these aren’t just different versions of reality; these are disparate visions of the work’s emotional and dramatic intent — worlds that contrast so heavily as to be confusing. Whose story is this? Who should we care about?

Ballets, especially 19th-century classics supposedly reimagined for the 21st century, can go deeper. If projection and puppet designers can do it, so can choreographers.