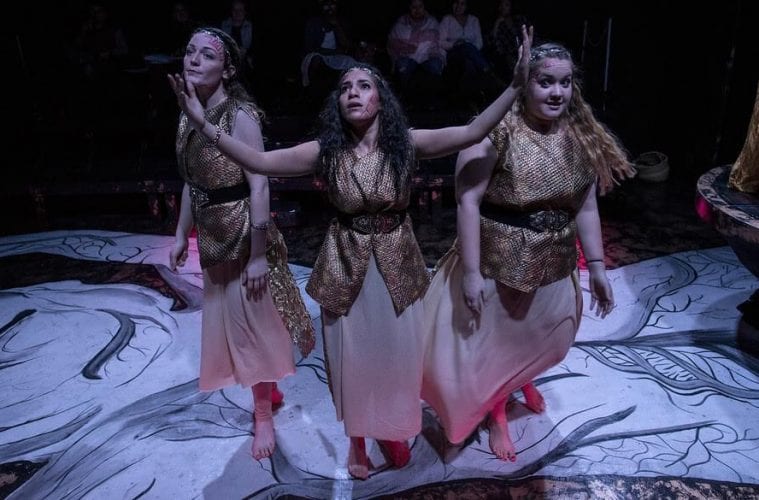 Review: “The Followers” offers an engaging, edgy look at the spiritual versus the rational

The Bacchae has always been something of a strange play, and it gets a little stranger in The Followers, an appealing and edgy new adaptation of the ancient tragedy at 7 Stages, running through February 25. Combining dance, music and theater, the retelling follows the basic structure of Euripides’ odd and violent allegory about the two opposing sides of human nature: the rational-civilized and the instinctive-spiritual. The rational is represented by Pentheus (Lowrey Brown), here masked and toting a glowing box called “Securitas” that speaks with a Siri-like voice, and the instinctive side finds suitable embodiment in the limber body of dancer Ofir Nahari as the god Dionysus.

At the opening of the play, some Thebans have begun to worship Dionysus as a god, but Pentheus and others are reluctant to accept the wild story of his having been conceived by a thunderclap and gestated in Zeus’ thigh. The worship gradually becomes more frenzied and devoted, and resistance more pronounced, until Pentheus meets a violent end at the hands of Dionysus’ followers. Nicolette Emanuelle and Stephen Devillers bring interesting comic touches to the characters of Tiresias and Cadmus, who are among the followers of Dionysus, and Diany Rodriguez has a savage intensity as Pentheus’ mother Agave, whose story and progression from resistor to follower we see far more of than in the source material; it’s one of the adaptation’s most interesting additions.

The play unfolds, not on 7 Stages’ mainstage theater — which is set to host an upcoming production of David Lindsay-Abaire’s Good People — but in its smaller blackbox space. The resulting sense of intimacy is one of the production’s many strengths; stage images have a depth, tactility and dimensionality that they wouldn’t on a proscenium stage, and situations in playwright Margaret Baldwin’s version evolve with engaging and satisfying immediacy. The play’s sound-world is likewise given fantastic pace and intriguing variety through the live presence of musician Klimchak, who performs on several songs alongside the show’s chorus, but even more powerfully underscores the dramatic action with a mix of percussive and melodic sounds on an array of curious instruments.

A sense of ritual pervades several scenes, and for better or worse, that tone seeps into other parts of the play, sometimes resulting in a sense of mannered theatricality. The play’s juxtaposition of the spiritual versus the rational is so primal and universal it can actually start to seem a little facile and superficial; maybe Euripides is to blame there. The addition of Siri’s voice serves to further reduce, rather than complicate, that dichotomy. The black-box setting is certainly effective, but the design for the space with its giant, painted human figure sprawling across the floor is simultaneously too busy and too static to function as a fitting backdrop.

In the end, The Followers is a show that seems to delight in the sense of foreignness it finds in a canonical classic. The production therefore may not be to everyone’s taste, but with its swiftly moving pace and its visual and auditory inventiveness, most will find that, even with the edges rough, something fascinating glistens deep within.