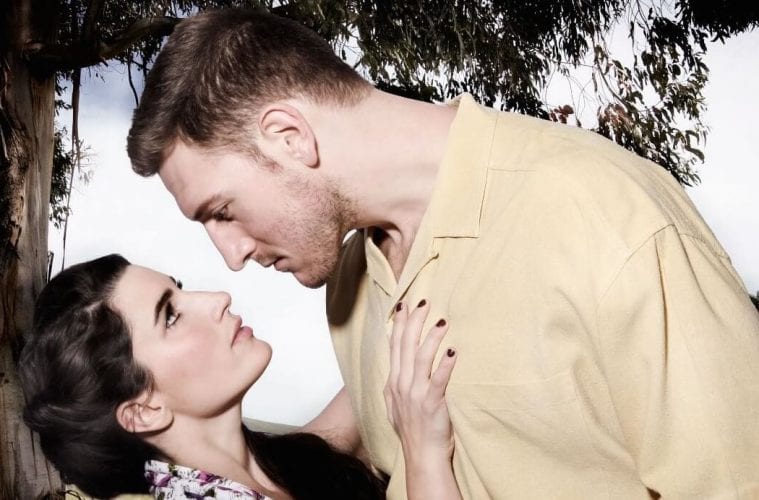 His plays aren’t produced with much regularity these days, but novelist and playwright William Inge left behind a tremendous body of work, including Come Back, Little Sheba, Bus Stop (my personal fave from Inge’s oeuvre) and The Dark at the Top of the Stairs. Picnic — arguably Inge’s most celebrated play — is currently receiving a solid production at Stage Door Players, running through February 18 at the Dunwoody playhouse.

The directing reins here belong to Tess Malis Kincaid, who has chosen a talented ensemble. Some of her performers, though, easily outshine some of the others.

On Labor Day in rural Kansas — where everyone is scurrying around for the annual neighborhood picnic — drifter Hal Carter (Blake Burgess) has begun doing some work for Helen Potts (Kara Cantrell), whose house is empty save for her invalid mother, whom she is taking care of. Helen lives next door to Flo Owens (Vicki Ellis Gray), who is single herself and taking care of two daughters, Madge (Shannon McCarren) and Millie (Shelby Folks), and renting a room to schoolteacher Rosemary Sydney (Rachel Frawley).

Hal, who parades around bare-chested and has skeletons in his closet, turns the heads of practically every woman in the area, including Madge, who is dating Hal’s college friend Alan Seymour (JD Myers). Hal’s overt sexuality isn’t something that is omnipresent in these parts — and it proves disruptive.

Others in the cast of characters are Rosemary’s boyfriend Howard Bevans (Larry Davis), Bomber (Jon Wierenga) — a young kid in the neighborhood — and schoolteachers Irma Kronkite (Liane LeMaster) and Christine Schoenwalder (Suzanne Roush).

Picnic bowed in 1953 with Paul Newman, Kim Stanley and Eileen Heckart in its original Broadway cast and eventually won a Pulitzer. A film version two years later starred, among others, William Holden and Kim Novak. Inge’s work received a star-studded revival five years ago in New York with Maggie Grace and Sebastian Stan as the central lovers and Ellen Burstyn and Mare Winningham as Helen and Flo, respectively. It’s a work that may seem simple but is a bit more complex and layered than it seems. For the most part, however, it’s not staged often — and Inge’s work can get lost in the shadow of some of his playwrighting contemporaries.

This version of Picnic is one that is brisk, clocking in at under two hours. Kincaid’s production, at least in the beginning, is always bristling with some sort of activity, and it rarely slows down. One character exits and another quickly pops in.

It’s a subtle play, one that doesn’t hit the audience over the head with its themes. Yet it’s still relevant, especially as the older characters look at the younger ones and regret some of their own mistakes, and the female characters seem sadly limited in their opportunities.

Ironically, it’s the more seasoned performers who come across most vividly here. In the leading roles of Madge and Hal, McCarren and Burgess are charismatic, but they don’t bring as much depth as they could. There seem to be dimensions to the characters neither of the performers are able to tap into. For all the skeletons in his past, for instance, Burgess’ Hal never seems as conflicted as the character needs to be. The romance and sexual attraction between the two characters never quite catches on either.

The play’s most memorable moments focus on some of the supporting characters and what they are dealing with. Frawley is lively — and often funny — as Rosemary, who refers to herself unjustly as an old maid. Her courtship of Howard doesn’t seem built on passion but the idea gnawing inside her that she is running out of time.

Yet the central performances turn out to be from Cantrell and Gray. Gray’s Flo is holding it all together and looking after her daughters, wanting the best for them and aware that she has stifled her own dreams. She is frightened when Madge — whom she thinks she is grooming to a proper path — takes a liking to the mysterious Hal. Across the yard, Cantrell’s Helen flirts with Hal a lot. She knows it won’t go anywhere, but at least it temporarily takes her mind off where her life has brought her.

The costumes by Jim Alford are appropriate of the period, while Chuck Welcome’s set features Flo’s and Helen’s houses next to each other. It’s ironic how closely their homes — and lives — overlap.

This version of Picnic isn’t earth-shattering and probably won’t convert non-fans, but it proves to be a satisfying production with some ace supporting turns.