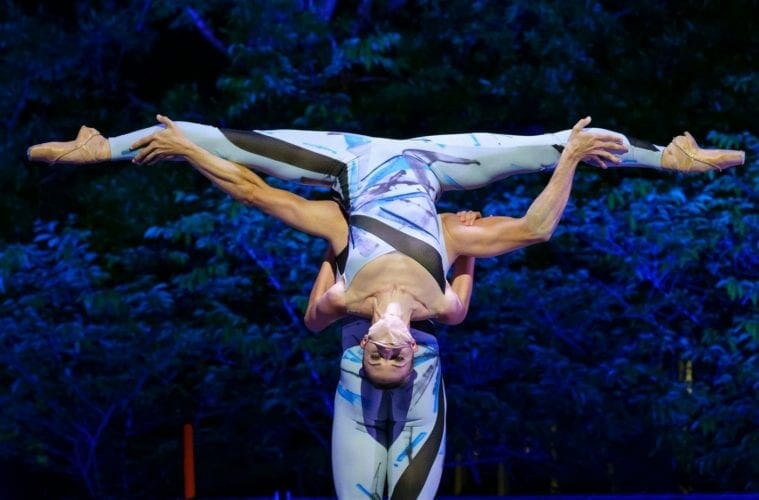 Atlanta Ballet made its return to the stage in front of live audiences Friday night, with another series of shows coming up this weekend. (Photos by Kim Kenney)

They’re back! On Friday, for the first time in more than a year, Atlanta Ballet dancers gave a magnificent in-person performance for a live audience. It was their first of six performances in the Georgia Tech Arts Skyline series. They’ll perform at the outdoor venue on three more evenings, May 7–9.

The mixed bill was drawn from the company’s two Silver Linings programs livestreamed in February and March.

Pleiades Dances, Claudia Schreier’s masterful work for 12 dancers, was the highlight of the evening. Pleiades is set to Takashi Yoshimatsu’s wildly knotty and impressionistic piano compositions. The women wear pointe shoes, but Schreier gives them so many fast gallops, runs and skips — and such strongly grounded, jazzy variations — that conventional toe work takes a back seat. Speed and dynamic changes in direction are what bring the music, and the viewer, alive. The pas de deux by real-life couple Emily Carrico and Sergio Masero is full of playful lifts. Pausing at the peak of each lift, Carrico would look toward the audience as if to say, look how much fun this is, look where he’s put me now!

Schreier seems to relish moving groups around the space, and to take delight in designing each dancer’s innovative exits. One section is particularly dramatic. Wave after wave of dancers move diagonally across the stage, lunging forward and back and forward again, creating architecture in motion. Everything moves at breakneck speed until the end, when the dancers surprise us with a series of simple, held poses and a soft drop to the floor. They raise their faces to the sky, as if looking at the stars.

Six of the works were choreographed by Atlanta Ballet dancers, and it’s not fair to compare Schreier’s choreographic abilities with those of the novice dance makers whose works preceded hers. She is, after all, Atlanta Ballet’s award-winning choreographer-in-residence. This is only her second piece for Atlanta Ballet, but she already has a robust body of work.

Keaton Leier’s elegant and airy La Forme du Vent opened the evening. The trio is set to three piano pieces by Debussy and I was again impressed by its simple beauty. In person we could appreciate even more the expressive port de bras and softness of head and arms. The choreography calls for delicacy of form rather than showy virtuosity. Erica Alvarado, Airi Igarashi and Saho Kumagai embodied the mood perfectly. 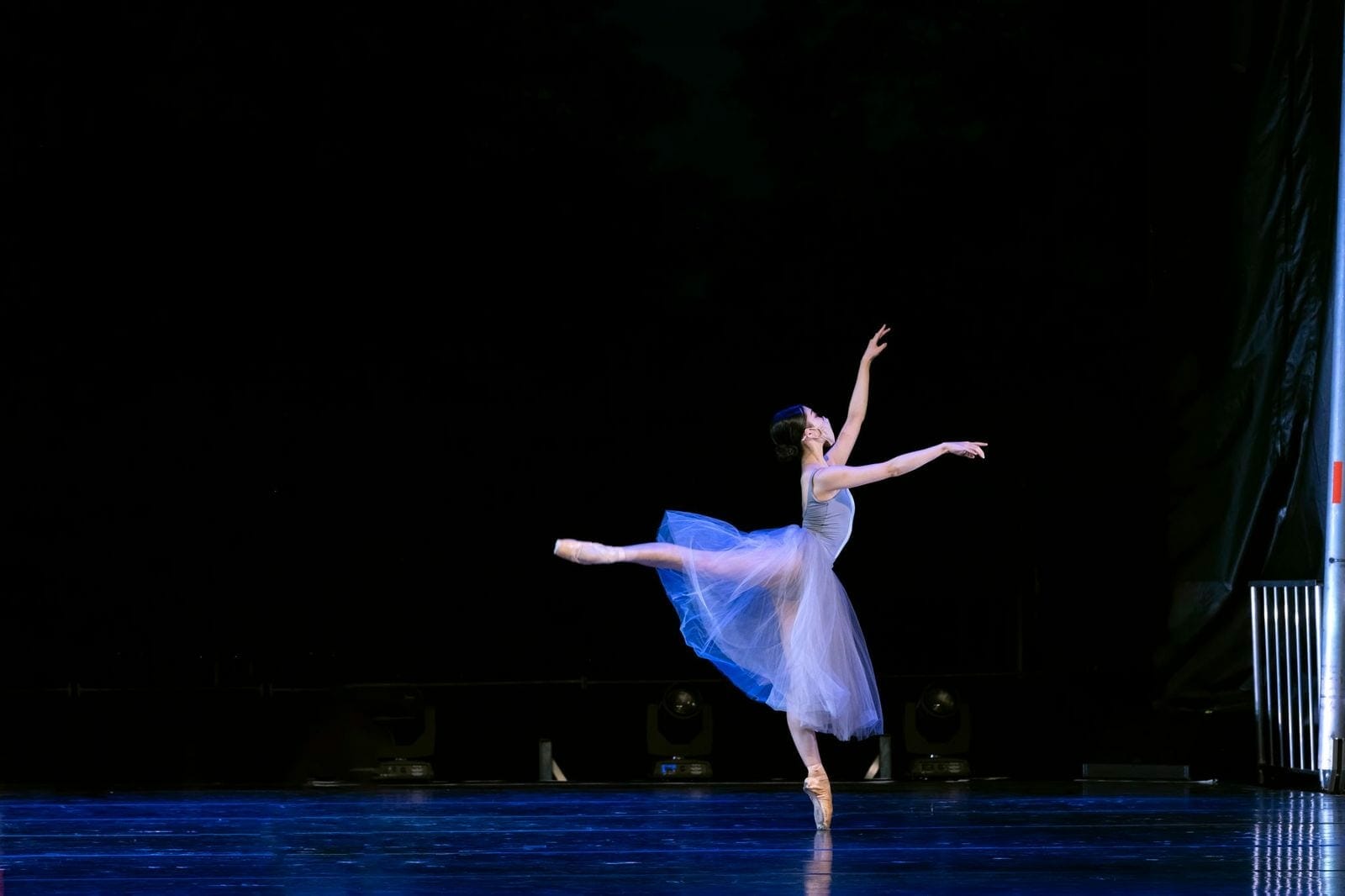 Another piano score, Liszt’s familiar Lieberstraum No. 3, was the setting for Carraig New’s I Know Where It Is, an exuberant duet for Anastasia Cheplyansky and Spencer Wetherington. The dancers captured the romantic thrust of the music. Cheplyansky easily tossed off multiple pirouettes and Wetherington gobbled up the stage with his jumps. He has a way of extending his arms and legs so dynamically that his body seems to grow longer and larger with each leap.

Darian Kane’s Dr. Rainbow’s Infinity Mirror was instantly recognizable from the Silver Linings lineup, with its quirky gestures, wardrobe of striped socks and black smocks, a parallel stance instead of ballet turnout, and the whimsical, retro sound of the band Musical Miracle. Only one section, the solo, was performed Friday — very ably by Sujin Han. We’ll see the full work next weekend with Jackie Nash dancing both this solo and the trio. It will be a poignant moment for her fans because it’s her last performance with Atlanta Ballet. In the fall, she will join Terminus Modern Ballet Theatre, which was founded by other Atlanta Ballet alumni, including her husband, Health Gill.

Rabten Numinous by Bret Coppa seemed once again to be weighed down by its own seriousness. Off-center extensions, a slight nod maybe to Paul Taylor and deep pliés in second position gave the work gravitas without telling us why. It seemed poised to reveal a story about the three characters but never found a way to tell it. I guess I was in the minority: The audience gave this one robust applause.

Masero’s Teneo Integrum, a beautiful addition to the livestreamed program, was presented in truncated form, without the opening pas de deux. In her solo, now the beginning of the piece, the expressive Catherine Conley reflected the yearning of Tchaikovsky’s “Valse Sentimentale” and all the cast beautifully embodied the score’s romanticism. Still, I missed the pas de deux and with two fewer dancers the ending tableau had none of the impact that it did in the livestreamed version. (You can see the complete ballet on YouTube).

Touchline was performed the same way as it was in the livestream, with Georgia Dalton’s powerful opening and closing solos serving as bookends to the duets, trios and group variations. The men looked great in a series of variations, with clean technique and seamless flow. I had the same misgivings about choreographer Anderson Souza’s literal approach to the Chopin études and preludes. It made the work feel more predictable than the movement vocabulary warranted, but it was artfully and authentically performed.

The evening was dedicated to Arturo Jacobus, the company’s president and CEO who is retiring at the end of this season. The dancers acknowledged him in their bows — a nice touch. Way too few people were in the audience, but the company will be back this weekend with a similar program that features Pleiades Dances and Keith Reeves’ Bodies in Motion. Guilherme Maciel’s This Bitter Earth will replace La Forme du Vent and I Know Where It Is.

We’ve waited a long time to see these dancers again in person. Now, finally, we can.