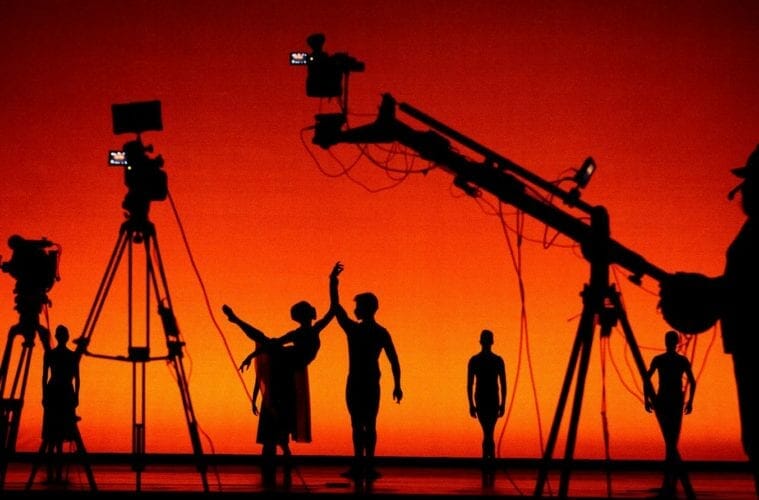 Friday's livestream from the Rialto Center for the Arts was Atlanta Ballet's first live performance in a year. (Photos by Kim Kenney)

The Atlanta Ballet’s free livestream Silver Linings was an experiment, and like many experiments, some of it worked; some of it — mainly the technical difficulties — didn’t. The performance took place Friday evening at the Rialto Center for the Arts and was livestreamed on the center’s Facebook channel in partnership with GSU-TV.

The mixed bill comprised five new works, each choreographed by a different company dancer, plus brief excerpts from Pleiades Dances, a new piece by resident choreographer Claudia Schreier. All were created during these challenging months of racial unrest and COVID-19 lockdowns, and each choreographer had a chance to say how these events informed his or her dance making.

The quality of the dancing was excellent, but technical glitches spoiled the live experience. Schreier’s work was supposed to have music but didn’t. Even though the ballet had permission to use the music selected for Schreier’s piece, Facebook has automatic algorithms that prevent copyrighted music from being played and no apparent immediate appeals process. Schreier’s excerpts were disappointing without sound, especially since the choreographer has said her initial inspiration is always the music.

The feed connection was lost toward the end of the fifth work, Darian Kane’s Dr. Rainbow’s Infinity Mirror. We never saw the end. By going back to the Rialto’s Facebook page, I was able to click on a second link to see the last work, the beautiful Teneo Integrum by Sergio Masero. Fortunately, the entire performance — without the technical problems experienced in the livestream — is now available online on the Rialto’s YouTube page.

There were other odd moments in the video stream. The dancers’ bows, executed in silence in an empty auditorium after each work, felt strange in this setting. Who were they bowing to? There also were long, empty pauses between the pieces. GSU-TV was responsible for production, and I couldn’t help but wish that they had recorded the evening, edited it and posted it on the company’s website, the way The Atlanta Opera did recently with its Big Tent Series. Dance is almost always diminished when reduced to a two-dimensional screen, and it’s not my favorite way to watch ballet. But as we approach the first anniversary of the lockdown, it was wonderful to see the company at all. In his introduction, artistic director Gennadi Nedvigin reminded us that the company’s last in-person performance was a year ago at the Cobb Energy Performing Arts Centre.

The dancers wore masks for Silver Linings, which was distracting at first, but after a while didn’t seem to matter. The best news is that the camera stayed at a distance during the hour-plus performance and showed the entire stage. We could see the structure of the works, the patterns in space and remember what it’s like to sit in a darkened theater, choosing where to look.

By far the most developed work was Teneo Integrum. Set to Schubert’s “Serenade” and Tchaikovsky’s “Valse Sentimentale,” it was full of lyrical, classical passages for six dancers and was the only work to risk an extended pas de deux. What a delight to see two people (Emily Carrico and Masero, who are living together and engaged to be married) who weren’t social distancing. They executed several classical lifts, which, while not particularly original, fit the romantic sweep of the music.

The use of space was lovely — the men were confident in bold, buoyant variations, the women elegant and legato in en pointe arabesques. The ending was exquisite, as each dancer completed a brief, unique variation before settling into a diagonal tableau. I was entranced by the finale to the point I watched it several times — one advantage of digital video. Masero is a beautifully musical dance maker. He said his goal was to uplift his audience and he succeeded. The two most experimental works were Keith Reeves’ Bodies in Motion and the truncated Dr. Rainbow’s Infinity Mirror. Reeves set his work to a sound score by Ptar (local dance and film composer Peter Flamming). Erica Alvarado aced the opening solo, the physical grief palpable. Jordan Leeper’s solo — grounded, gestural and performed primarily in place — packed an emotional punch. But the group sections for the women stylistically seemed to belong in a different ballet.

Dr. Rainbow (what we saw of it) was whimsical and quirky and set to two pieces by the band Miracle Musical. The three dancers wore brightly colored socks and baggy black smocks. Little parallel jumps off both feet were interspersed with grounded, gesture-driven vocabulary. For one moment, two dancers touched. Strange how these days one dancer holding another’s extended ankle can feel like a thrilling, even daring move. Kane deserves credit for creating her own style and vocabulary mostly divorced from the classical lexicon.

This Bitter Earth by Guilherme Maciel clocked in at barely five minutes and had little time to develop. Calm and meditative, it featured soft arm work for three women with music by Max Richter and Clyde Lovern Otis. It would be good to see where Maciel takes this.

Given Atlanta Ballet’s shift to more traditional classical repertory, it was exciting to see some first-time choreographers take creative risks in the Silver Linings program. I wonder if they would have had this opportunity without the shutdown. Either way, it bodes well for more innovation when Atlanta Ballet once again performs for a live audience.

Details of the March 19 event will be announced shortly, but will include the premiere of the complete Pleiades Dances. Let’s hope the glitches get ironed out. The dancers deserve better than they got on Friday.