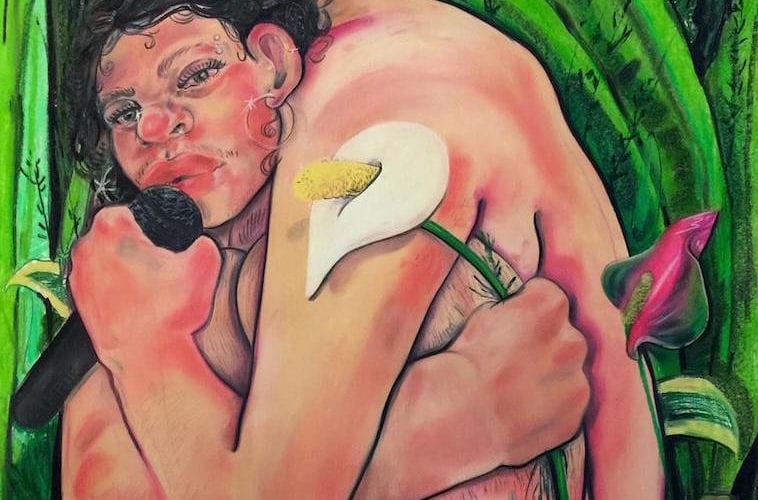 Call it big-tent curating. The 2019 edition of the Atlanta Biennial, the Atlanta Contemporary’s look at artmaking in 10 Southern states, gathers together the work of 21 artists whose personal histories are as diverse as their artistic practices.

A thousand tomorrows could have come off as an earnest checklist. On the contrary, it is coherent and engaging. As conceived and installed by Daniel Fuller, Atlanta Contemporary’s curator, and Phillip March Jones, founder and curator-at-large at Kentucky’s Institute 193, ideas ricochet through the galleries as the works of art converse with one another and with us. If the issues are familiar, the artists engage them in personal, and sometimes unforgettable, ways.

Discomfort — hers and ours — is a hallmark of Alina Perez’s charcoal-and-pastel drawings. In the self-portrait Karaoke, Perez depicts herself scrunched (hiding?) in a leafy tropical setting, her nude body seemingly twice as large as the space it occupies. The Miami artist has discussed the stereotyping and rejection she’s felt as a queer woman and as a Cuban. To judge from her Facebook photos, she distorts her appearance in the direction of unattractiveness. Is this her self-image? Is it defiance? The microphone she clutches seems an attribute of a very fraught performance.

In contrast, Triana Arnold James proudly celebrates her self in the photographs she commissioned from Atlanta artist Jill Frank for her (unsuccessful) bid for Georgia lieutenant governor. These are the opposite of intentionally bland campaign photos. In one, James wears fatigues to highlight her 26-year military career, but refers to her history of activism by saluting with a bright pink glove. James’ photos put one in mind of the recent spate of women running for office. Matthew Shain documents another positive development in his series Post-Monuments. The New Orleans artist traveled across the South and to the Bronx to take these photos of the empty plinths on which monuments to Confederate heroes once stood. Shain approaches this hot topic with visual cool. Shot in black and white, the bases are as shorn of emotion as minimalist Donald Judd’s boxes.

At the other end of the spectrum, Melvin Way’s hermetic drawings radiate intensity. The South Carolina native squeezes a flurry of marks — runes? chemistry equations? — onto scraps of paper and cardboard he carries around in his pockets. These notations may be inscrutable, but their urgency is clear, and affecting.

Way, who is schizophrenic, is among the artists here whose physical or mental difficulties set them apart from mainstream society. The curators accord such artists special respect, as embodiments of the elemental need to create, heedless of approval or economic considerations.

One hallmark of an art biennial is currency: it’s a report on contemporary practices after two years of studio visits in a given area. This one is a bit atypical. It includes, for instance, an artwork created more than 40 years ago (Jim Roche’s Don’t Tread on Me No More Y’all: Piece) and a video selection of programs from the American Music Show, a zany, rapturously amateurish public access TV show that ran from 1981 to 2005. (Remarkably, this is the only video in the show, which is not a criticism but a surprise considering the primacy of the medium these days.)

But then, what is currency? You can’t get timelier than John Isiah Walton’s painting series Zulu Portraits, which he began in 2014. They present politicians, white and black, smeared with black paint. I’m told the New Orleans artist is symbolically inducting his subjects into the African American krewe of Zulu. That some of the participants wear blackface during Mardi Gras seems a sardonic and power-switching variation on the Paul Laurence Dunbar poem “We Wear the Mask.”

Maybe A thousand tomorrows is less a digest of today’s trends than it is a declaration of principles. The curators, it seems, are looking for authenticity; in their view, good art is good art is good art. Regardless of training or point of view, the artists here are in command of their materials and processes, and they have something to say to us. On the wall: untitled works made of plastic bags and found material with thread by Jessie Dunahoo (courtesy of the Jessie Dunahoo Estate); foreground: Jim Roche’s Da Snake, a glass-on-canvas piece.