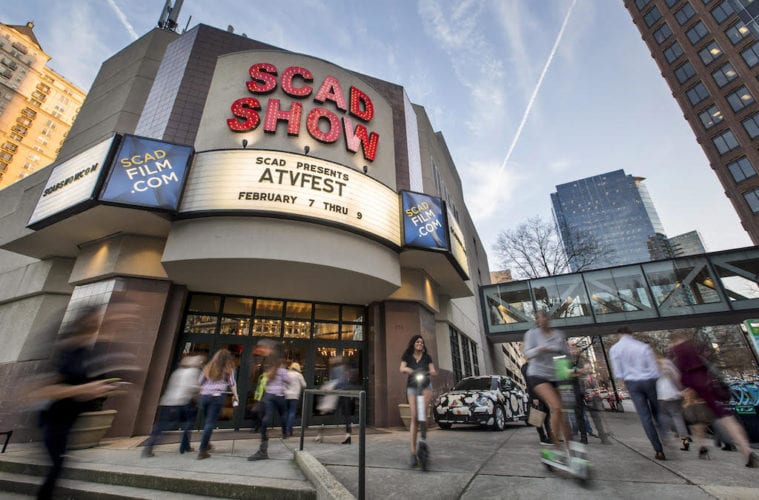 The SCAD aTVfest, now in its seventh year, is a big celebration of the small screen, attracting hundreds of television industry and media professionals annually. This year’s event, which was held February 7, 8 and 9, also included a 40th-anniversary celebration of the Savannah College of Art and Design.

It was no doubt a star-studded event, but the big headliner this year seemed to be the city of Atlanta itself. Four major network television shows that were filmed in the area, as well as an original SCAD series, all had splashy screenings with cast and crew members, and SCAD alumni were on hand to talk about their own TV successes.

In addition to panel discussions, master classes and screenings of both current and upcoming shows, awards were doled out. Unbreakable Kimmy Schmidt’s Ellie Kemper took home the Spotlight Award, while visual effects guru and SCAD alum Mir Zafar Ali won the SCAD40 Prize. The ensemble cast of the NBC drama New Amsterdam received the Outstanding Cast Award, and David Boreanaz of Bones and CBS’s SEAL Team walked away with the Maverick Award.

Television shows such as The Gifted, The Resident, The Passage and Miracle Workers showcased Atlanta’s ability to successfully serve as the backdrop for a major network series.

Fox’s The Passage, based on Justin Cronin’s book trilogy, follows a group of scientists who discover a virus that could potentially cure all known diseases, but could also, if they’re not careful, wipe out the human race. Its cast includes Mark-Paul Gosselaar, Henry Ian Cusick and Jamie McShane, all present at the aTVfest screening.

Daniel Radcliffe headlines Miracle Workers, an upcoming TBS show based on Simon Rich’s book, What in God’s Name. In the series, Radcliffe plays a kind of low-level angel, and Steve Buscemi stars as God. Cast members Karan Soni, Jon Bass and Sasha Compere and director Jorma Taccone were all on hand at this year’s event.

Actors Amy Acker, Emma Dumont and Skyler Samuels from The Gifted also attended, as did the show-runner, Matt Nix. An offspring of Marvel’s X-Men, The Gifted, now in its second season, stars Acker and Stephen Moyer as parents who go on the run after they discover their children have mutant powers.

Showrunner Nix, who also oversaw the short-lived series Complications, has already learned some tricks about filming in the city.

“Atlanta is a great place to film,” he says. “One thing that I think is interesting about Atlanta, though, having shot in a number of cities, is that it’s very spread out. You don’t want to have to drive anywhere in the middle of the day, because traffic is really rough. The best thing is that you can find a really good location and — as long as you can stay there — you can have a great time shooting.” 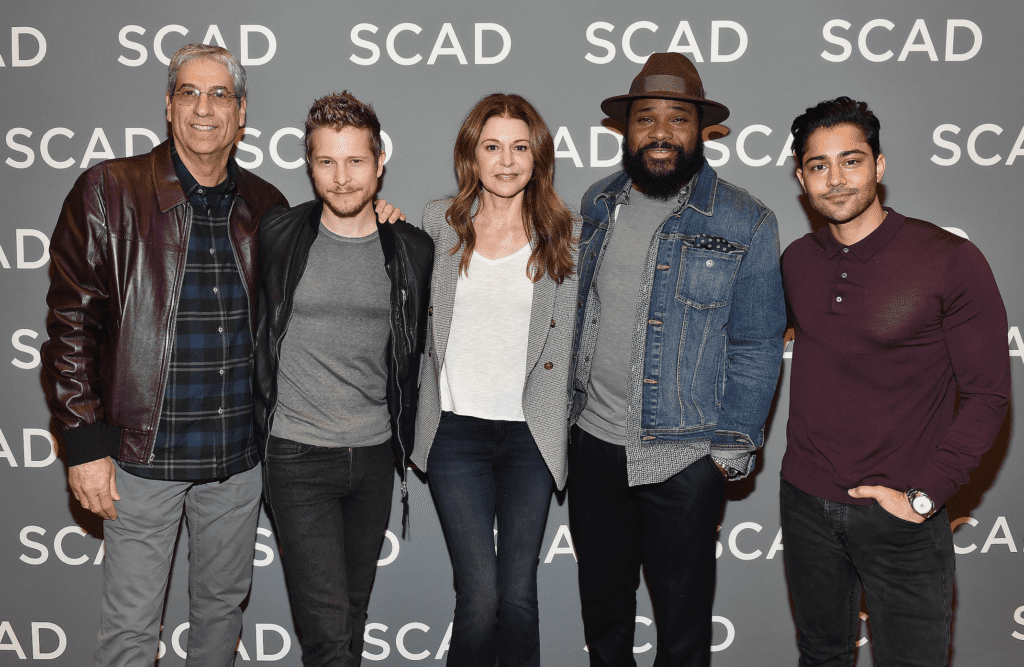 The cast of Fox’s The Resident, shot primarily in Midtown, attended this year’s aTVfest. (Photo courtesy of Getty Images for aTVfest)

Filmed largely in Midtown, Fox’s addictive medical drama The Resident, also in its second season, brought in actors Matt Czuchry, Jane Leeves, Manish Dayal and Malcolm-Jamal Warner and executive producer and director Rob Corn. Czuchry was happy to gush about the ensemble he works with and the city he’s shooting in.

“Each character in the show has a point of view and is in a different place in their career. Bruce Greenwood was attached before I came aboard, and he was one of the reasons I wanted to do it. As for Atlanta, the local crews are full of great people who are hard-working and very open.”

Atlanta was also center stage in the SCAD Gets Real panel, which featured SCAD alumni and current students who have all made names for themselves via reality TV. Panelists included Candice Glover, the winner of Season 12 of American Idol, currently getting a degree in dramatic writing; Merline Labissiere from Project Runway, a 2011 graduate in fashion; George Lovett from Showtime at the Apollo, a 2011 graduate in performing arts; Michael Wilson Morgan from American Grit, a 2001 graduate in media and performing arts; Heidi Elnora from Bride by Design and Project Runway, a 2002 graduate in fashion; and Jon Moody from Southern Charm New Orleans, a 2014 graduate in visual effects and a 2015 graduate in painting.

Labissiere knew she wanted to try out for Project Runway but had to do so three times before making it on the show.

“It was because of getting turned down that first time that I wanted to come to SCAD,” she says. She relished her time on the show — and her subsequent visit on Project Runway All Stars — but she was caught off guard when she became the inadvertent villain of her initial season.

Glover remembers watching Idol when she was 16 and seeing Jordin Sparks win — and realizing that she wanted to try that route as well. She is now studying at SCAD and is the star of the student comedy G.R.I.T.S., which made its debut at this year’s aTVfest. It’s an ensemble show, set in a soul food restaurant in Atlanta, written by alumnus Chad Morton, who was part of the team of the Emmy Award-winning The Buzz. It has a diverse, all-student cast. 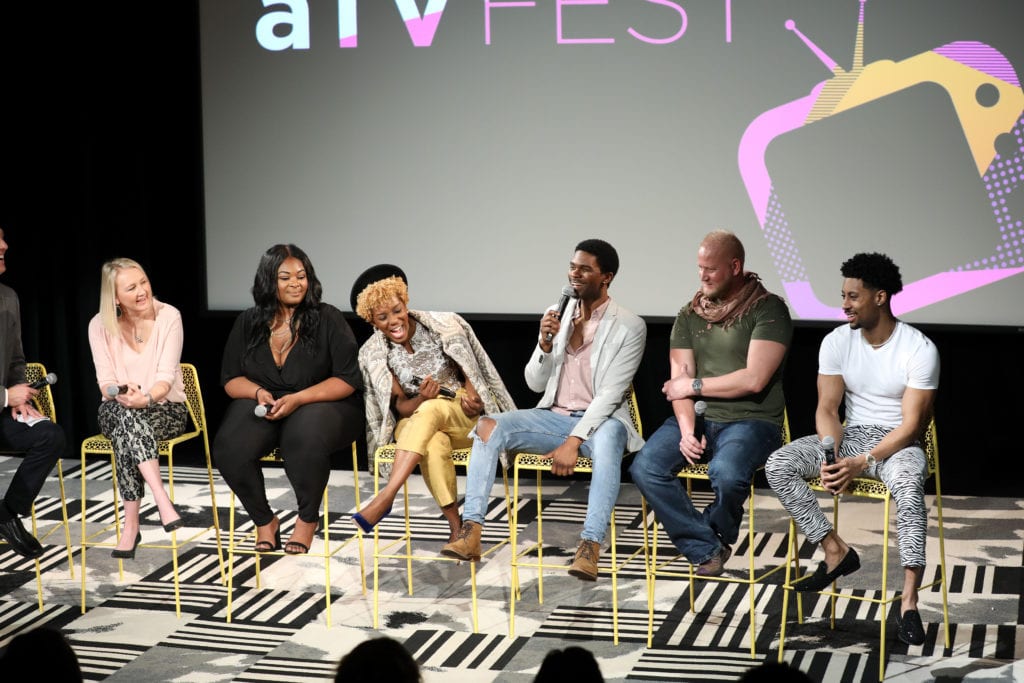 What drew Glover to the project was its local flavor and ensemble feel.

“It’s a collaborative effort,” she says. “Everyone has a say in what goes on. We meet with the writers twice a week, and the lines change every time we get on set. Now that we are going into the second episode, we feel more comfortable.”

When Morton was envisioning the show, he had a good sense of what he wanted to do.

“I was trying to think of something that was going to relate to me at first, but during that time — in the political climate we were in — I knew I wanted to put that in my work as well,” he says. “I wanted the sitcom to mean something to everyone who was in it.”

He is currently shopping the series around and working on additional episodes.

Of the approximate 14,000 SCAD alumni from entertainment and digital media, more than 2,800 work in the Georgia entertainment industry, contributing to the $9.5 billion that film and television bring into the state.

For The Resident’s executive producer and director, Rob Corn — who previously directed 41 episodes of Grey’s Anatomy — filming in Atlanta has been a bit of a homecoming. He worked on the TV movie Cold Sassy Tree in the late ‘80s and was also in town with his wife while she worked on the films Fried Green Tomatoes and The War with Kevin Costner.

“I was never in the city — I was always on the outskirts.” But, he says, “Now I am here, and it’s fantastic, between the people, the restaurants and the history. I am thrilled to come back.”